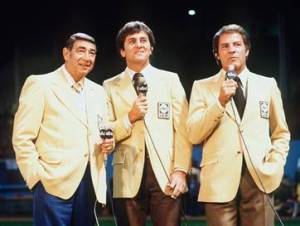 As a kid at the time, one of the highlights of Monday Night Football was – at some point late in the game with the outcome no longer in doubt – hearing commentator Don Meredith croon, “Turn out the lights, the party’s over.”

(According to Wikipedia, Dandy Don also announced that he was “mile-high” before a game in Denver)

If I was that Lipton tea-lovin’, ex-Cowboys quarterback, I’d be cuing up the Willie Nelson song on my iPod, for my iPod.

If the device was Old Yeller, well…

(and, as an odd aside, I realize that the last time I saw Old Yeller, I watched it at a friend’s house with a couple of cats who were unaffected by the flick)

Yes, the iPod is slipping.

I first noticed an occasional, unrequested skip over a song or some other indifference to my command.

Now, there are other symptoms, occuring with greater frequency, that lead me to believe that it’s a matter of time before the longtime companion heads off to eternally dream of electric sheep.

I wasn’t keen on the iPod when I acquired it as a prize. I had an mp3 player. It worked well. And I didn’t necessarily feel the need to have tens of thousands of songs at my fingertips.

It was a throwback to college and most of my twenties when I was used to having a dozen or so cassettes in my backpack for the Walkman.

And there was a method to my madness.

Though I understood that lots of music, easily accessible, was cool in concept, I liked the fact that having fewer songs in one place made me more inclined to listen to tracks I might have overlooked, thus, discovering new favorites.

I can’t say that I was wrong.

How many times over the past three years have I skipped over a song by The Jam because I wanted to hear something I knew and loved?

I quite like The Jam, but aside from a handful of songs of which I am well familiar, I have another 60 or so songs by the trio of which I am far less – or maybe not at all – familiar.

(I bought Paloma the box set years ago)

But, instead of taking the time to check out an obscure track – be it by The Jam or Bob Dylan or whomever -when it shuffled up, I often shuffle forward to find something I know.

I’ve been doing research for this iPod’s replacement. And, of course, it is the model with the greatest storage capacity – enough space for damned near everything I own – that has caught my eye.

And someday, I might actually give all of those songs by The Jam a listen.

Here are four random songs from the iPod…

from All Fired Up: The Very Best Of Pat Benatar

from The Ultimate Hits Collection

from The Very Best Of Marvin Gaye