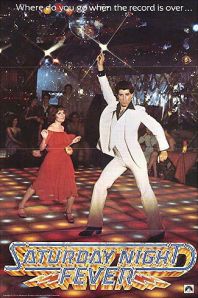 The soundtrack to Saturday Night Fever was the first vinyl album I remember owning, a Christmas gift in 1977.

I had little interest in music at the time, but I imagine that lots of folks received that album, that Christmas season, from people who knew them well enough to feel compelled to give a gift, yet not well enough to not what the recipient might truly want.

I received my copy from from an aunt.

(she wasn’t some cool, hip, younger aunt, but, rather, an older widow who swore like a sailor, drove a beat-up Oldsmobile like a lunatic accompanied by a German Shepherd named Odd, and lived in a crumbling, urban neighborhood prone to gang violence)

Of course, even with meager interest in music, I was aware of the first hit from the soundtrack – The Bee Gees’ How Deep Is Your Love – which was the Number One song in the US on Christmas Day.

The movie had been released in November and I do recall the stir it had caused. My best friend Will had a sister in high school at the time who was obsessed with the movie. The poster from the movie adorned her bedroom wall – Farrah Fawcett’s famous poster hung in the room Will shared with his brother.

(I suppose that if future archealogists unearthed such a tableau, it wouldn’t be a bad pop culture snapshot of the times)

I was ten and hadn’t seen the movie.

Not that I had much interest in it, nor would I have been able to get past the box office at our town’s small movie theater. Everyone knew everyone, making underage admittance to an R-rated movie a no-go.

It wasn’t a conscious decision, but I also never thought to myself, damn, I’ve received a blessing from the Dalai Lama, but I really should sit down and watch Saturday Night Fever.

One of friends at a record store where I worked had told us during one our usual post-shift drinking sessions of his aunt, who worked on the lighting for the dancefloor in the movie and even appeared in a number of scenes.

During that same time, I traveled through the UK with one of those barroom buddies. In Stratford-upon-Avon, we returned to our accommodations following an evening of toasting Shakespeare.

It was one of the nicer places we had stayed, a small bungalow-type dwelling with a living room and kitchen.

My buddy crashed, but I sprawled out in the living room, working my way through bags of crisps and channel-surfing.

The screen was suddenly filled with Tony Manero, dressed like a dandy and strutting down some grimy Brooklyn street, making a clumsy attempt to pick up some chick and eating pizza.

All as Stayin’ Alive played over the opening credits.

So, I hunkered down, tore into more crisps, and watched.

And, sure enough, there riding shotgun in the DJ booth was our friend from back in the States, dressed in drag and wearing glasses.

Thirty-four years ago, Saturday Night Fever had yet to be be released to theaters and How Deep Is Your Love had been on the charts for a mere five weeks. Within six months, the movie was a smash, the soundtrack was a juggernaut, and thirty or forty Bee Gees songs or ones penned by the Gibbs were on the radio.

About the only music I was hearing then was from our town’s radio station which would be playing in our kitchen as I ate breakfast before school. It was still a Top 40 station at the time, leaning toward light rock.

I once asked a friend’s girlfriend if people ever noted her resemblence to Carly Simon.

She was unfamiliar with the singer, but a couple of days later, the buddy called and informed me that the girlfriend had looked up Carly on the internet; she was none too pleased with my comparison.

But, wasn’t Carly simply one of the sexiest women of the ’70s? I mean, I was ten when Nobody Does It Better, the theme song from the James Bond flick The Spy Who Loved Me, was a hit and I’d figured that out.

Foreigner’s debut album makes me think of Lynn, the older brother of one of our friends from the neighborhood, who resembled a young Axl Rose and drove a black Trans-Am, tearing through the neighborhood with Foreigner blaring from the eight-track player.

Though the group received little love from critics, Foreigner put out some great songs, peaking with the mega-selling Foreigner 4 in ’81.

The dramatic Cold As Ice has all of the things – a nifty balance between guitar and keyboards, soaring vocals, and immediately memorable choruses – that made Foreigner a high school staple.

In 1977, about the only thing I knew about Paul Simon is that I had seen him on television and I thought that he looked like an older, distant cousin of mine.

I quite liked the laid-back and resigned Slip Slidin’ Away when it would come on the radio, but it would be several more years before I began to learn of Simon’s place in pop music culture and his classic work with Art Garfunkel.

Even before I was really into music, I knew a lot of Steve Miller songs from his hits in ‘70s. Fly Like An Eagle, Jet Airliner, and Take The Money And Run were always playing over the public pool’s sound system.

Personally, I much preferred Swingtown which was a staple on the jukebox in the bowling alley during the winter of ’77 where my friends and I would spend Saturday afternoons.