The Walkman Is Dead 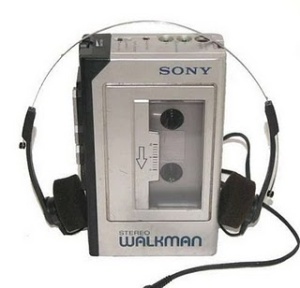 I’ve come across several articles over the past few days announcing the end of Sony’s Walkman. The final batch was shipped to stores in Japan.

The groundbreaking portable cassette player hit the shores of the States in 1979 as a fifth grader deep in the heart of nowhere was just beginning to warm to music. I hadn’t even committed to buying music at the time much less feel a need to have the stuff at my beck and call at all times.

And, at that time, even if I’d wanted a Walkman, the cost would have made having one a pipe dream.

By the summer of ’82, I had the radio on as often as possible and had begun to buy cassettes. My buddy Beej was always ahead of the curve in electronic gadgetry and he was the first among my friends to snag a Walkman. He brought it home from his annual summer visit to see his dad in Arizona.

Months later, a portable cassette player was part of my take for Christmas.

I think it was a Panasonic.

It didn’t matter to me as the mere ability to block out the world and be lost in music anywhere, at any time, was the beginning of a beautiful friendship and an oft-needed refuge.

It must have been the next Christmas that I received my first Walkman. The following summer I didn’t remove the Walkman’s headphones once during our family’s two week trip to Florida.

(I was sixteen, sullen, and adhering to teenage protocol)

It’s odd that I don’t remember the details of my first Walkman. That part of my brain might have been blown out in the ’90s

Or, maybe it’s because I had a number of portable cassette players of different brands over a two decade period. The prices dropped making them more economical to replace and replace them I did as, though I did treat mine with care, I put them through an excessive workload.

The last time I remember having a Sony was toward the end of high school. It was one of the first to reduce the size of the device down to just slightly larger than the size of the cassette being played.

It ended up heading to college with me, served me well, and is likely now in some anonymous landfill.

Time and techology marches on.

I remained true to the concept of the portable cassette player until the first few years of the 21st century when I bought an mp3 player. Now, it’s hard to imagine not having tens of thousands of songs at my fingertips.

Here are four random songs courtesy of the iPod…

from Very Best Of Robert Palmer

I knew only a sliver of the work of the suave Robert Palmer prior to the doubleshot of his solo album Riptide and the debut by The Power Station in 1985/1986. Then, he was inescapable on radio and video.

But, I’ve come to appreciate the earlier records by the late singer especially since Paloma and I started buying vinyl. Every Kinda Of People has a breezy feel and, though the song – which echoes the legendary Marvin Gaye – has a serious message, it’s uplifting as its theme of acceptance is delivered with a soulful vocal by Palmer that soars.

I really liked the first couple albums by Duran Duran after the group hit the US shores in late ’82.

(I had to discover their self-titled debut after Rio hit)

The shimmering ballad Save A Prayer was a favorite.

I know that even as a small child, I immediately recognized the heaviness of the theme song from M*A*S*H even before I became a viewer of the show. Later, I was surprised to learn that the teenaged son of director Robert Altman had written the lyrics.

For quite awhile, this anthemic cover wasn’t the easiest song to find for Manics fans in the States.

from The Aeroplane Flies High

Paloma and I loved The Smashing Pumpkins and I can still picture the toy ray gun that she wore in her hair when we saw them live on their tour for Mellon Collie And The Infinite Sadness. I wouldn’t hesitate to name them as one of the best bands of the ’90s.

The prolific band released a number of cover songs including this one by The Cars. Toward the end of the Pumpkins run with the original line-up, I saw them again. I told Billy Corgan that I had dug the solo record he had produced for The Cars’ Rik Ocasek.

He smiled as soon as I mentioned the little-heard (but truly groovy) album.