It surely doesn’t suck to be a rock star.

You get to travel to exotic locales, demand waffles at any hour, and stay up as late as you want, as often as you want.

You also get a helicopter.

Having had the chance to meet or speak with some successful musicians, it’s still an abstraction to me to think of them dealing with the things – trivial or not – that we mere mortals must.

But even successful musicians, obviously, do have friction in their lives.

In 2002, I had the opportunity to interview Louie Perez of Los Lobos, coinciding with the band’s then new album Good Morning Aztlan. It was the perennially critically-acclaimed act’s third straight album on a different label.

Mammoth Records, which was issuing the release, would fold a couple years later.

Los Lobos had fifteen years separating them from their brief period of mainstream success with the music from the bio-pic La Bamba.

As I interviewed Perez, he was courteous and pleasant, giving well-considered answers, but something seemed not quite right. I think I flat out asked him if he was OK.

He noted some of the adversity that the band had endured.

(I think I actually said “man”)

“Yeah, it is pretty cool,” he agreed, seeming to be re-energized at the thought.

It’s not every day you get to cheer up an integral part of a truly great band.

Impossible to pigeon-hole, here are four songs that hardly scratch the surface of the breadth of Los Lobos’ catalog…

(some years later, I would finally catch up)

Children of immigrants, Los Lobos cut their teeth, in the words of All Music Guide, “playing parties, wedding receptions, restaurants, bars, and anyplace else where someone might pay them for a gig” for a decade before finding success.

Drawing on the music of their Latino heritage, the band incorporated traditional folk, country, R&B, and rock into the mix with virtuoso musicianship.

In 1992, Los Lobos released Kiko, their collaboration with noted producer Mitchell Froom, and proved that they could do experimental rock as well as any of the modern rock bands of the period.

The lovely Tony Y Maria details the struggle of the titular characters, a couple wanting nothing more than a life together and to provide for their children. It’s a simple, plaintive song that is a reminder that, at the heart of the arguments and debates, there are real people.

Good Morning Aztlan found Los Lobos working with producer John Leckie, known for his work with bands like XTC, Radiohead, and Stone Roses. Not that the soulful The Word would remind a listener of any of those bands.

Instead, The Word simmers and soars, with a groove and socially-conscious lyrics that evoke the spirit of early ’70s R&B. 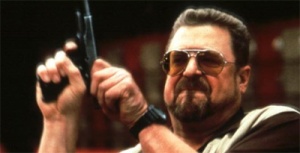 I know that Walter Sobcheck does, indeed, give a @#%! about them. He was willing to send Smokey into “a world of pain” for a foot foul in The Big Lebowski.

Admittedly, Walter was a bit extreme and Smokey – as you know if you’ve seen the movie – had emotional problems besides pacifism.

(but, unlike ‘nam, there are rules in bowling)

I kept thinking about Walter as I drank coffee and watched ESPN’s coverage of Lance Armstrong being stripped of his Tour de France triumphs over doping allegations. I was unsurprised that public opinion revealed a groundswell of vigorous support for the cyclist.

I am not a cyclist, a doctor, or a chemist.

I am a sports fan, so I’ve casually followed Armstrong’s saga and know the basic plot points.

I have no more idea than you likely do as to whether he cheated or not.

I do know that one recurring argument I keep hearing is that, because of his status as a cancer survivor, because of his contributions to cancer research, and because he has provided inspiration and hope to millions, Lance Armstrong should be left alone.

If Armstrong is guilty of what is alleged and he did cheat, he probably did so for the reason that most humans throughout time have cheated – he stood to benefit.

His altruistic efforts are laudable and deserve kudos, but Armstrong has certainly been rewarded for his cycling success and the possibility of that success being ill-gotten is troubling.

Troubling not so much in the context of Armstrong and what he may or may not have done, but troubling in that there seems to be a lot of ends justifying the means going on everywhere.

I’ve observed in the corporate world a willingness to bend the rules that has become pervasive. It’s business, it’s said, and, if you’re not cheating, you’re not trying.

But there are repercussions to massaging the truth so you or someone higher up on the corporate food chain might have enough scratch and stock options to be able to replace organs or own a back-up yacht.

In the financial world, the numeric voodoo and dishonest culture that seems to be so accepted has left the global economy in shambles and millions in distress.

If Armstrong cheated, I suppose that he could be accused of robbing someone else of the chance to achieve their dreams and to bask in glory. Yes, that would be unfortunate, but not quite on the scale of vaporizing the economy.

So, when all is said and done, I’m not particularly concerned about Lance Armstrong. He seems to have retained a lot of support and, though his world might not be seashells and balloons, he should still be good.

I will commute to work and spend the week walking a tightrope. The more honest I am with clients, the more I’m at a disadvantage which well might be my undoing because, apparently, only Walter Sobcheck gives a @#%! about the rules.

Here are four songs that appeared in The Big Lebowski…

Songwriter friends I have known revere the catalog of Townes Van Zandt and I’ve dug the little of the late Texan’s work that I know. The Big Lebowski made use of a live recording of Van Zandt’s cover of The Rolling Stone’s Dead Flowers.

Kenny Rogers cracks me up, but Just Dropped In (To See What Condition My Condition Was In) is pretty groovy and surprised me the first time that I heard it.

The Dude had strong feelings regarding The Eagles and, needless to say, he wasn’t going to go bowling with Frey and Henley. Perhaps he was more of a fan of The Gipsy Kings flamenco-styled take on one of The Eagles’ classics.

The Dude lost his Creedence tapes, along with his briefcase and some business papers, when his car was stolen. Fortunately – and despite the pessimism of the officers handling his case – he did get his car and his Creedence tapes back.

Run Through The Jungle was among CCR’s impressive string of brilliant singles that the band seemed to churn out at will during a three-year stretch in the late ’60s and early ’70s.

In the ’80s, with lead singer John Fogerty having a successful return to music with Centerfield, it was Run Through The Jungle that Fogerty was accused of plagiarizing for his The Old Man Down The Road by his former label president.