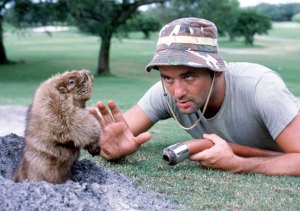 I’ve happened across the movie Caddyshack a number of times lately. It’s been popping up on the Golf Channel, some “movie night” concept that has the feel of a regular program with nowhere to go.

Seriously, aside from Caddyshack, what other golf movies have there been?

There’s Tin Cup, and I think there was a bio-pic on Bobby Jones earlier last decade, and The Legend Of Bagger Vance (which I really liked).

But Caddyshack was quite the iconic flick with my junior high classmates. Few films I’ve been to kept the crowd at a constant buzz than Caddyshack did when I saw it in our small town’s theater on a Friday night.

The movie was maybe the first one that provided quotes that my friends and I would use on through high school. And having Rodney Dangerfield, Bill Murray, and Chevy Chase in the same movie held obvious appeal.

It even made Kenny Loggins cool for a brief period.

The movie also resonated so much with us because, though our town was small, we had our own Bushwood. It had a stellar golf course, tennis courts, pool, lobster and prime rib on the menu…

My family wasn’t members, but a couple friends’ families were and they would get the rest of us in as guests.

Not that we really had much interest in the place. Yeah, we totally dug playing some golf after school a couple times a season, but there were other tennis courts in town and there were far more girls our age hanging at the public pool during the summer.

Of course, the summer before I headed off to college, I did spend a memorable afternoon at The Club. Through some twist of fate and despite no professional experience in the field, I ended up watching one of my high school teacher’s kids – three boys.

So, I spent the afternoon lounging poolside under blue skies, knowing that if any of the urchins drowned, I had already graduated. To my left, lounging eighteen inches from me, was Kate Hawkins, one of the most sought after girls in our class.

One of the very few memorable shots I’ve made while golfing happened at The Club when I chipped in a shot from just off the green on ten to make par. The Scottish invented golf. Here’s four songs from some acts from Scotland…

from Take A Little Rhythm

Ali Thomson is not only from Scotland, but his brother Doug was the bassist for Supertramp.

I remember hearing Take A Little Rhythm often at the pool during the summer of 1980 and it shuffles up periodically on the iPod. Yet, I couldn’t recite to you more than a few words of lyric aside from the titular ones.

I don’t want to know. I just want it to be a laid-back little song that feels like summer to me.

With an entirely different seasonal vibe is Cocteau Twins who completely conjure up autumn for me – late autumn…widescreen, panoramic shots at dusk of isolated, thatch-roofed cottages perched precariously near cliffs, waves crashing onto a rocky shoreline below as a steady rain falls…and stuff.

I loved Mary’s Prayer when it was a minor hit a good decade before it made the soundtrack for There’s Something About Mary. And I know that we snagged a copy on vinyl awhile back that I keep forgetting to check out.

I know that Collins had some success with the band Orange Juice in the ’80s, but it certainly didn’t translate to success in the US (or, if it did, I never heard their music).

But A Girl Like You , an Iggy Pop-inspired, fuzz-guitar driven confection, got a lot of attention in ’95 (and deservedly so) when it was on the soundtrack for the movie Empire Records.

I’ve never seen Empire Records aside from a few minutes here and there on cable. Paloma and I were working at the same record store at the time, so, there really was no need, but A Girl Like You was four minutes of near perfection.

“I Have A Twin Sister Named Libby”

Or so my friend Chris replied, when asked “how he was?” by another friend’s girlfriend. It was not long after Chris (and that twin sister Libby) moved to our small town. I think we were freshman in high school.

I was thinking about Libby the other day. Paloma and I have recently started a vinyl collection (I think we’ve purchased nearly 250 in less than two weeks, so it’s been harmlessly obsessive). Anyhow, I did snag a copy of Supertramp’s Breakfast In America and, seeing the cover in detail for the first time, I could see that the waitress’ name is not Bev, as I had speculated, but Libby.

Chris’ twin sister Libby was a sweet girl; in retrospect, she reminded me of Talia Shire in the original Rocky, but with more whimsy.

Chris turned me on to a lot of music and he was amazingly ahead of the curve considering the limited access we had to civilization – it was forty-five minutes to a record store, radio in the Midwest was decidedly (and endearingly) Midwestern, and we didn’t get MTV ‘til 1984 (although WTBS’ Night Tracks arrived a year earlier).

Maybe not so strange, but many of the acts that Chris turned me on to – The Cure, Thomas Dolby, Cocteau Twins – would prove to be favorites of Paloma’s.

Cocteau Twins – Carolyn’s Fingers
I can’t recall the first song I ever heard by the Cocteau Twins – it was either Memory Gongs or Sea Swallow Me – but I had never heard anything like them. It was otherworldly

Thomas Dolby – Europa And The Pirate Twins
Thomas Dolby was no secret in 1983, but after She Blinded Me With Science, there was little interest in the man. But Chris incessantly played his follow-up album, The Flat Earth, introducing me to Paloma’s favorite Dolby – namely the title song and Screen Kiss. Europa And The Pirate Twins is an earlier song, but a charming and touching bit of nostalgia.

The Cure – Siamese Twins
Pornography was my first exposure to The Cure courtesy of, yet again, Chris. I never bought into the gloomy sentiments, but I enjoyed the music. My favorites were The Hanging Gardens and A Hundred Years, but until I post something about hanging gardens or a century, this track will do.

Concrete Blonde – Les Coeurs Jumeaux
I sucked at French in college (I mostly remember my professor playing Roxy Music before class), but I believe Les Coeurs Jumeaux translates into “The Twin Hearts.” Whatever the case, I’d loved Concrete Blonde the first time I heard Bloodletting and own pretty much everything they’ve done. Walking In London disappointed me, but this unabashedly romantic song from that album ranks among my favorites of theirs.