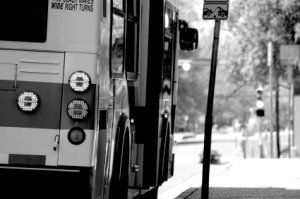 I do so relunctantly and under silent protest and, on good evenings, I can block out Sting howling the lyrics to Synchronicity II, which plays on a loop in my head during the drive.

The morning trek, though, is typically Zen. The only people up when Paloma and I arise are us, the kid that drowsily mans the counter at the convenience store down the block, and a coke-binging, downstairs neighbor who probably never sleeps.

The morning commute involves no travel on the interstate and the bulk of the map – once I get a few miles from home – threads through semi-rural, wooded areas. There are deer, a fox, and an old woman in bright red boots who is always walking her dog in her yard.

At such an hour, there is little traffic.

Today, I was mere minutes off schedule, resulting in me inhaling the exhaust of the #2 bus. Not only did this predicament ruin the cigarette I was smoking, it frustrated me to not have open road to cruise as usual, with impunity, as though I was on the autobahn.

A paradoxical thought came to mind…

…I don’t want to go to work, so why am I rushing to get there?

(is that a paradox?)

I set the controls for the heart of the sun (part of the drive, depending on the time of year, is directly into the rising sun on the horizon) and I set to scrolling through the stations on the Sirius satellite radio Paloma got me for Christmas.

The music is from before I was a teenager, before music was of particular interest to me, but I know most of the songs.

Some of the songs I hazily recall from the time that they were hits and the others are ones I’ve come to know over the intervening years.

There’s something about the mellow vibe of a lot of the pop hits from the ’70s that calms the nerves and allows me to ease into the day.

from Have A Nice Decade: The 70s Pop Culture Box

Few artists over the past forty years have made as much wonderful music that has been as ignored by the masses as Todd Rundgren. Personally, I really wouldn’t discover his music until high school through my buddy Bosco who was rabid for Runt (and Utopia).

The Ever Popular Tortured Artist Effect was the one that I quite liked at the time.

But years before Bosco’s guidance, I knew the brilliant Hello It’s Me from hearing it on the car radio as a tyke.

from Have A Nice Decade: The 70s Pop Culture Box

Though I was a toddler in 1971, I do remember hearing Lobo’s Me And You And A Dog Named Boo on the radio at the time. I imagine the fact that the singer had a dog appealed to me.

(my brother and I had to make do with a hamster and hamsters, if no one has ever told you, don’t fetch).

But I dig the breezy song which I can’t help thinking would have made a most excellent theme song to a Saturday morning kids show.

Whenever I hear Peter Criss crooning Beth, I can’t help but wonder if the song was the first great musical curveball – a successful hard rock band scoring an unexpected hit with a ballad.

(though, Alice Cooper did have a hit with Only Women Bleed a year earlier)

from The Best Of Kansas

So, I’m ten-years old and I’m groggily sitting at our kitchen table, having been rousted out of a warm bed at six in the morning for school.

There’s news coming from the radio and, then, a song – a pretty, acoustic song with soothing guitars and lovely harmonies – is playing. And they’re singing about everything crumbling to the ground and only earth and sky lasting.

I’m pondering whether it’s possible to – just once – get through a bowl of Cocoa Pebbles before they liquified into a slushy mush and Kansas is playing the soundtrack. 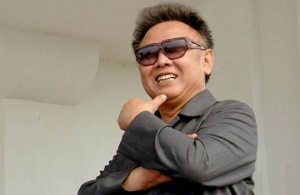 So, from what I understand, the action flick The Expendables arrives in theaters this weekend. I know because I’ve been suckered into the commercial on numerous occasions the past few weeks at the first notes of Guns ‘N Roses’ Paradise City.

(I’ve often wondered if it is true that the titular city is a reference to Indianapolis, Indiana)

The first time I saw a commercial, I was surprised as it was made to appear that – aside from bringing together every action star dating back to Johnny Weismuller – the movie featured the testosterone-laden trio of Arnold Schwarzeneggar, Sylvester Stallone, and Bruce Willis.

Assuming that the movie industry is populated by the same jet-fuel geniuses that burned down the music industry, I couldn’t help but picture someone at the studio giddily punching all of the grosses from all of the films by the three into a calculator and, with great glee, declaring, “If we cast them all, we’ll make this much!”

Of course, each time I have seen the commercial since, the Schwarzeneggar/Stallone/Willis triumvirate seems to be less touted and, from what I’ve read, it’s Stallone’s flick with the other two making mere cameos.

I have no plans to see The Expendables, though. I will staunchly argue that the original Rocky was an amazingly inspired bit of filmmaking and numbers II and III retain a certain charm rooted in childhood, but I don’t think I’ve seen one of Stallone’s movies in the theater since Cobra.

But the release of The Expendables made me realize that the US is missing an opportunity to calm tensions with North Korea.

And he craves attention.

We call on the aging action stars of the world for a diplomatic mission thus giving them something to do that will still keep them in the limelight.

We send Stallone, Lundgren, Van Damme, Seagal, and whoever else is willing to go to North Korea to meet with Kim Jong Il. Dear Leader would undoubtedly be willing to take a meeting with the stars of the movies he loves.

Essentially, we appeal to the egos of the action stars to appeal to the starstruck fandom of a daffy little dictator for a little time out on shenanigans.

A shot to hang with Rambo and Ivan Drago, knowing that the images and stories would be beamed around the world, would scratch Jong Il right where he itches.

He so wants to be a rock star.

He so wants to be cool.

Kim agrees to stop dabbling in nuclear rocket projects and get some sandwiches to his people and Schwarzeneggar and friends agree to spend some time being his buddy – taking him to movie premieres or for walks on the beach, going clubbing, or hitting the links.

We turn the whole thing into a reality show and the ratings go through the roof.

In the meantime, here are four songs with heroic implications…

It’s classic David Bowie. What more could there really be to say?

from Everybody’s In Show-Biz

Of course, there’s the downside to fame and notoriety which The Kinks capture wonderfully in the melancholic, wistful Ray Davies-penned Celluloid Heroes.

from The Colour And The Shape

Sure, I understand the importance of Nirvana as agents of change in the musical landscape, but I’m considerably more likely to pull up something by Dave Grohl’s Foo Fighters especially if it’s from 1997’s stellar The Colour And The Shape.

from Music From “The Elder”

Aside from a handful of songs, I’ve never been a Kiss fan, but I do find A World Without Heroes to be compelling.

In a bid to reverse declining album sales and gain some artistic credibility, Kiss reunited with producer Bob Ezrin, who was coming off of the massive success of Pink Floyd’s The Wall, for a record that was intended to be a soundtrack to a movie that was never made.

Though it did garner some positive reviews, the album baffled long-time fans and bombed. The sparse, spacey A World Without Heroes is atmospheric, but it’s not surprising that it wasn’t embraced by the group’s fans.

I recall seeing Kiss perform the downbeat song along with a couple others from Music From “The Elder” on the late-night comedy show Fridays not long after the album’s release.