Well, not exactly a piper, but a drum major…

As further proof that everyone gets their fifteen minutes, John Coleman has popped up in headlines the last few days. Coleman has left the pipe and drum regiment of which he was a member because he waved to Barack Obama during the inaugural parade.

So, yeah, I suppose he violated the esprit de corps and broke ranks with his fellow pipers and drummers, but it’s an understandable, spontaneous lapse in decorum. It’s not like he molested a collie.

The article I read made me feel like this incident has left Coleman a broken man (“burned bridges” and “hurt feelings” are mentioned). Sure, it’s probably a bummer as he’s been with the band for 17 years and I suppose finding a pipe and drum band to join is probably in needle/haystack territory.

However, in the long run, I think he’s coming out ahead.

Thirty years from now, he’s retired and living in some condo enclave (though, he’s not entirely relaxed) in Florida (unless, due to a rise in the oceans, South Georgia is on the coast three decades from now).

Coleman will be the toast of the compound, though. He can regal them with embellished tales.

The women will swoon, their eyes glazing over (except for the ones who might once have dated a drummer), having spent decades married to bankers, plumbers, doctors, and others engaged in more mundane professions.

The men – most of who will have once aspired to be in a band – will take a jab to their egos (except for the ones who might once have had a drummer crash on their couch for more than a year).

The tale will conclude – each and every time – with him recounting getting kicked out of the band, how it was politically motivated by a controversial incident involving him and Barack Obama during his band’s gig on the day Obama was sworn in.

The chicks are going to dig John. I have no doubt.

He might even be able to put the band back together.

Todd Rundgren – Bang On The Drum All Day
Pound for pound, few artists over the past forty years have made as much wonderful music that has been as relatively ignored as Todd Rundgren. Sadly, Bang The Drum All Day, is probably one of his better-known songs as it seemed every radio station would play this song on Fridays.

Bongwater – The Drum
Bongwater was a strange little duo (which is not surprising as they opted for the moniker Bongwater). Singer Ann Magnuson has popped up as an actress on a handful of mainstream movies and television shows, quite against type as Bongwater was as much avant garde performance art as music. 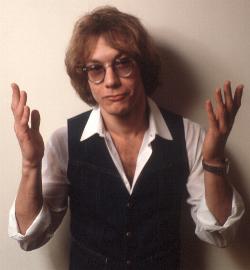 That’s right. If it hadn’t been for a miserable little tumor, Warren Zevon might be having cake and wearing a silly hat today. Unfortunately, Mr. Bad Example couldn’t be with us today.

I suppose my interest in him began with his 1987 album Sentimental Hygiene. I was in college and the fact that the members of R.E.M. served as Zevon’s backing band legally mandated my curiosity.

The album left me slightly underwhelmed but intrigued enough to snag a copy of the compilation A Quiet, Normal Life: The Best Of Warren Zevon. It was a revelation as I discovered there was much, much more to the man than a single song about werewolves – beheaded mercenaries, diplomats, duplicitous waitresses, and innumerable other, colorful ne’er-do-wells populated the lyrics.

Paloma gave me a copy of his biography, I’ll Sleep When I’m Dead, this past Christmas which I inhaled in about two days. Compiled by his ex-wife with instruction by Warren to leave nothing out, there’s not a dull moment, although it is so candid that it’s a bit exhausting at times.

The man did lead a full-grown life that would make for a good screenplay. If you can start a story with a sixteen year-old kid stealing a Corvette which his Russian father – who is a professional gambler – has won in a card game and taking off to New York to be a folk singer in the late ‘60s even though he aspires to be the next Igor Stravinsky (under whom he has studied)…

I also once had a bizarre dream where Warren had been sentenced to some community service work. He was to take underprivileged kids camping.

Instead, this motley collection of kids ended up in sleeping bags on the floor of some posh hotel suite; the carnage of dozens of room service trays everywhere (certainly at least one pot roast).

And Warren? He was standing amidst the wreckage, cigarette in hand as he growled, “We’re roughing it now, aren’t we kids?”

Wherever he might be on this day, I hope he’s enjoying a sandwich.

Warren Zevon – Desparados Under The Eaves
Leave it to Zevon to make the hum of an air conditioner sound like a spiritual event.

Warren Zevon – Roland The Headless Thompson Gunner
Chris, one of my best friends in high school (and college), accompanied me the first time I saw Zevon live. As Chris liked to declare, “I’m part Norwegian” and I think he took particular pride in the exploits of “Norway’s bravest son.”

Warren Zevon – Play It All Night Long
Life is hard and apparently more so in the rural South. Possibly the only song in the history of mankind which mentions brucellosis.

Warren Zevon – Reconsider Me
Warren was a black-out alcoholic and could be a rather prickly fellow. I suspect he had to make the titular request more than a few times to the ones he loved.

Warren Zevon – Splendid Isolation
Warren had an eclectic group of fellow musicians who guested on his records, ranging from R.E.M. to Jerry Garcia and Bob Dylan to George Clinton. Neil Young makes an appearance on Splendid Isolation.

Warren Zevon – Heartache Spoke Here
Dwight Yoakam adds harmony vocals to this twangy track. Makes one wonder of the hijinks which might have ensued had Warren gone country and ended up at the Grand Ol’ Opry.

Warren Zevon – Searching For A Heart
“They say love conquers all. You can’t start it like a car. You can’t stop it with a gun.” Perfect.

Warren Zevon – Mutineer
Near the end of his life as he was dying from cancer, Warren made an appearance on long-time fan David Letterman’s show (the only time Letterman has devoted an entire show to one guest). Part of the interview and a rather poignant performance of Mutineer can be seen here