The Remains Of The Day

Years ago, while studying in Singapore, a half-dozen of us took off to Thailand for a stretch.

During the last few days of the junket, several of us were verging on cashed, including me and my buddy Vince. To maximize our minimal funds and thus afford passage back to Singapore, we put into effect a plan to not eat before sunset each day.

We were at that bar late one afternoon, having a pint as the sun edged toward the horizon and anticipating grabbing some dinner. Several nights earlier our group had discovered a pizza place not far from the beach.

Babylon Pizza could have been located in the States. Open to the street, it was filled with wooden tables, checked tablecloths, and lots of brick. They served the only good pizza we had eaten in six months.

The impending feast caused the conversation between Vince and I to become about Thanksgiving. We sat at the bar, stomachs growling, ticking off the dishes that made the holiday a glorious one. One of us would describe an item in detail as the other nodded in agreement, struggling not to drool.

We reached the conclusion, though, that as wonderful as Thanksgiving might be, the best meal of the day was later, often after everyone had gone to bed and the house was still. It would then be into the kitchen to pile a plate high with leftovers from the fridge.

And, this year, I invoked that tradition. With Paloma and the animals slumbering, I shuffled out to the kitchen and prepared a late-night feast.

As I topped it all off with some gravy, I paused and raised the ladle in a toast to Vince before heading into the living room and settling in to watch Gonzaga and Clemson in some holiday hoops tournament.

It was the perfect ending to a lovely day.

The first Top 40 hit for Genesis in the States, Follow You, Follow Me came after Peter Gabriel’s exit and the reduction of the band to a trio, an incarnation that would have considerable commercial success in the ensuing decade. I imagine it caused considerable angst for the long-time fans of the progressive act.

Music fans can (have and will) argue about the quality of the Sammy Hagar-led version of Van Halen as opposed to the output of the band’s music when fronted by David Lee Roth, but there’s little denying that the band’s second act garnered them a more mainstream audience and sold a lot of albums.

The pulsating Why Can’t This Be Love served as Van Hagar’s introduction to the world when it hit radio in early 1986.

I actually grabbed a copy of Marillion’s Seasons End while on that trip to Thailand, completely unaware that lead singer Fish had left the progressive band until I read the liner notes.

Fish’s departure would have received little mention or been of much interest in the States where Marillion had little more than a cult following. I had only become aware of Marillion from the scant airplay of their song Kayleigh in 1985 and seeing the band open for Rush at the time.

With new lead singer Steve Hogarth, Marillion continued to have success in their native UK into the ’90s including having a hit with the lovely, elegiac Easter.

As a college student in the latter half of the ’80s, I was quite familiar with alternative folk rockers 10,0000 Maniacs who were darlings of the burgeoning college rock scene. Mainstream success eluded the band until issuing their MTV Unplugged set in 1993 and scoring a hit with a cover of the Patti Smith/Bruce Springsteen composition Because The Night.

When lead singer Natalie Merchant set out on a solo career, 10,000 Maniacs tagged Mary Ramsey, who had played violin and viola as well as adding backing vocals on MTV Unplugged, as their new vocalist.

As Merchant was selling millions with her solo debut Tigerlily, easily eclipsing the commercial fortunes of her former band, 10,000 Maniacs notched a second Top 40 hit in the States as Ramsey gave voice to the band’s version of Roxy Music’s More Than This. 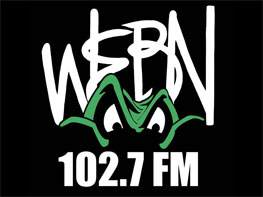 For the first year or so that radio had captured my interest, I was hesitant to roll the bones and scan the dial for fear of ending up in some hostile, unfamiliar musical terrain that might warp my psyche.

So, it was Q102 which was a Top 40 station but with a dose of songs from acts like The Who, Led Zeppelin, and others that would – a decade or so later – become the backbone of classic rock stations.

These kids had older siblings in high school and there was something more dangerous about ‘EBN in my mind. It was the station for long-haired hooligans who smoked cigarettes as the station blared from their Trans-Ams.

I likely suspected that listening to the station would turn me into a juvie.

But, by the time I reached high school, I was surfing the dial with total abandon and even dialing up WEBN.

WEBN played some acts with which I was familiar from Q102. They played Journey and they played Billy Squier, but much of it was unfamiliar terrain and an introduction to acts about whom I knew little – Black Sabbath, The Kinks, Cream, Jimi Hendrix…

And, the most appealing thing about this new listening destination to me was Frog’s Midnight Album during which each weeknight the station would air a new album, one side at a time.

The Rolling Stones’ Undercover was one of the most anticipated albums of late ’83, arriving more than three years after their last studio album – an eternity at the time. And, as I recall, it proved to be critically rebuffed.

Personally, I dug Undercover Of The Night, the first single, and the sheer momentum of new music from The Stones helped propel the song into the Top Ten. It’s a trippy tune fraught with a menacing vibe that’s always been an essential part of much of the band’s finest work.

Even though Yes had their heydey in the ’70s and were split by the time I really started paying attention, I was familiar with the band thanks to my buddy Streuss who was a big fan.

Then 90125 brought the reunited band to a new audience aided by the production of Trevor Horn and MTV. I think most of us owned a copy at the time and, though I’m still a bit burned out on Owner Of A Lonely Heart, songs like Leave It, It Can Happen, and the shimmering Our Song still sounds pretty good nearly thirty years on.

Though it had been eighteen months or so since Survivor had unleashed Eye Of The Tiger, the song had been so mammoth that there was some hoopla when the band returned with the follow-up to its parent album.

And then I heard the title track. It was no Eye Of The Tiger.

Caught In The Game obviously had no chance to duplicate the monster success of Eye Of The Tiger and the song is rather generic. However, when it popped up on shuffle not long ago, it made me smile and prompted a second listen, so, there is something that I dig about it.

Genesis had been moving in a more commercial direction for half a decade or so when their self-titled album arrived in 1983. The trio’s previous studio effort, Abacab, had spawned three Top 40 hits with No Reply At All, Man On The Corner, and the title track, while still retaining some of the group’s expected progressive tendencies.

Genesis was even more tailored for radio and produced the band’s biggest hit to date with That’s All. The haunting (and haunted) Home By The Sea harkened back more to Genesis’ progressive roots, appearing on the album in two parts – Home By The Sea and Second Home By The Sea – that ran better than eleven minutes combined.

Though it’s still quite summer during the day, the morning commute through the backroads has been one with less light and a slight chill in the air.

The chill is unmistakeably September.

But, we would still try to squeeze as much time outside as possible, playing some hoops or football in someone’s yard until the dark ended the festivities earlier and earlier each night.

Of course, there was something about sleeping with the windows open in September. Following the heat of summer, the cool air induced drowsiness so effortlessly and completely that Pfizer or Merck would drown kittens to be able to replicate it in pill form.

Some Septembers, the night would be accompanied by the hum of machinary harvesting the crop late into the evening in the cornfield across the road. If that wasn’t the case, there was always the whisper from the interstate a mile or so down that same road.

It was a pleasant way to be lulled to dream.

And, September was a month for spectacular visuals, especially in our rural, Midwestern town.

September now brings the annual re-examination of the events that kickstarted this whole Orwellian misadventure known as The War On Terror.

And, since I no longer live in the Midwest, I haven’t gotten the full-blown autumn experience in two decades. There’s still color, but the season is far less defined.

Perusing the files, there wasn’t much in the way of September songs that moved me. When in doubt, head for the ’80s, so here are four songs from Billboard magazine’s chart for the first week of September, 1980 – some I remember from the time, others whose acquaintence I’d make later…

I keep threatening – much to Paloma’s dismay – to cast a write-in vote for The Red-Headed Stranger in this November’s presidential election.

From …And Then There Were Three… – with the wonderful Follow You Follow Me – through 1983’s self-titled album, Genesis deftly balanced their progressive past with the band’s more pop future.

Listening to the driving Turn It On Again for the first time in some time, I realize how cool of a sound Genesis had during those years.

When Paloma and I started buying vinyl a few years ago, there was an initial burst of excitement. Paloma, in a fit of her enthusiasm which I adore, purchased ten albums by Split Enz knowing no more than a handful of songs by the Kiwi act.

It was a decision she regretted – “The members of Split Enz don’t even have as many Split Enz albums as we do.” – but the playfully creepy I Got You is still a classic from the period.

Did people at the time realize what a perfect rock song that AC/DC had given the world with You Shook Me All Night Long?

It’s still an arresting three and a half minutes of bravado, lust, and adrenaline.