And To Think I Overheard It On Mulberry Street 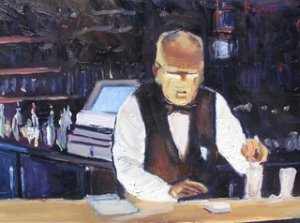 It wasn’t Mulberry Street, but that thoroughfare as described by Dr. Seuss was a favorite of mine as a child. Marco’s imagination runs wild with zebras and sultans and such on an ordinary walk home from school.

Marco had Mulberry Street. I had The Iguana, a local bar with a quasi-cantina vibe to it and a reliable place to find grist for my imagination, be it the patrons or merely the setting.

The Drunken Frenchman once told me that “if you’re good with your barkeep, you’re good.” Earl was our barkeep and, with him, we couldn’t have been better.

From one night’s worth of notes…

Dave sits nearby, a sodden sort who I’ve noticed has followed my lead and now scribbles into a small notebook. Very well – it keeps him occupied and insures that he will not ask me, yet again, the meaning of the tattoo on my wrist. He’s not good with his barkeep and is nursing a watered-down drink like he intends to still be drinking it when The Rapture arrives.

There are snatches of conversation everywhere.

“I keep a place in the city, but I’m building a townhouse.”

“Five grand and they’re all mine.”

Gina Zinnia is several seats down, perched at the corner of the bar; devouring a burrito as though she is performing origami with knives. I know her name because she has announced it in a shrill voice that has surely awakened the dead for George Romero’s next movie.

She has been babbling without pause for forty-five minutes about her opera singer father, a bad flight to Seattle, the time she was lost as a girl scout (I suspect she was abandoned), and numerous other traumas both small and smaller.

Her date sits slack-jawed and inert, certainly wishing for death or another round.

I now know better. Gina Zinnia has never made a long story short. She has, however, made short stories into excruciatingly painful, long epics.

A blonde nearby, a model she claims, is lamenting the fact that she’s not in New York and nothing compares to New York and she should know because she just got back from Paris.

I want to write a blues song and call it This Imperfect World Doesn’t Suit My Perfect Ass.

A smartly dressed young fellow is reeking of cologne. He waves to someone he obviously knows across the bar.

“I’ll be right back,” he says to his companion, as she makes no effort to hold back a yawn.

“Are you trying to get rid of me?”

He asks the question flirtatiously, but, in perhaps the only moment of honesty that will take place, here, tonight, she replies, “Yeah.”