“I Once Drove Sixteen Hours For A Cup Of Coffee” 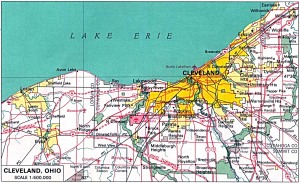 On nights like this one – the temperature dropping into the single digits – I rethink global warming being such a bad idea. Sure, there might be mosquitos the size of biplanes, global warfare over sunscreen, and Vanuatu might sink, but our teeth wouldn’t be chattering.

It’s raw outside. “It’s the kinda night that’s so cold that your spit freezes before it hits the ground.”

And that line from Cowboy Junkies’ ‘Cause Cheap Is How I Feel makes me think of a college friend who often quoted it on frigid nights when we’d head out to our favorite pub for a pint or two.

He was used to intemperate temperatures. He was from Brainerd, Minnesota, a small town, just south of the Arctic Circle where, if you had too lengthy a lunch, you risked missing the forty-five minutes of summer each year.

After we graduated, he returned to the Great White North and I headed in the other direction. There have been winter days when we’ve spoken on the phone and he has been positively giddy at the prospect of the temperature hitting thirty-five degrees.

This near Canadian was one of my best friends in college even though I was a slightly more coherent Jeff Lebowski and he was a far less villainous Gordon Gecko. Even if on paper our friendship shouldn’t have necessarily worked, it did.

He called me on some random Tuesday night in January. There was snow on the ground and I was sprawled on the couch watching hoops or a Barney Miller rerun.

“Want to go to Cleveland tomorrow?”

He had read about a coffee shop in Cleveland, Arabica Coffee House, and how spectacularly profitable it was and he wanted to do reconnaissance.

I was only taking a couple classes to finish my degree and, since I rarely went to them, I quickly jumped at the chance for an eight-hour ride in a drafty jeep.

So, the next day, he picked me up, we drove to Cleveland, hung at the coffee shop, met with the owner for a couple hours, and drove back to school.

This friend used to joke about wanting a jet and his mind was often working on a scheme as he had an entrepreneurial streak. His vision of green in a pile of coffee beans was especially prescient as, at the time of our java junket, Starbuck’s had fewer than 100 locations.

Had we followed through with the knowledge gained from that road trip, we might have been coffee moguls. This friend would remark that, when his biography was written, he wanted a chapter titled I Once Drove Sixteen Hours For A Cup Of Coffee.

For now, he’ll have to settle for this.

Of course, on our sixteen-hour trip, there was sixteen hours of music. I don’t recall exactly what we listened to – maybe some radio but mostly cassettes – but I could make some good guesses…

Cowboy Junkies caused a commotion with The Trinity Sessions, but their sparse, unadorned sound was not quite where my head was at the time. Over the next decade, I’d snag several of their albums as promos, and I’ve never really given them more than a cursory listen. Margo Timmons does have a lovely voice, though, so perhaps I need to revisit them.

Ian Broudie made some fine music, but with Pure he managed to concoct a perfectly infectious single.

I had the chance to meet Karl Wallinger, ex-Waterboy and the creative force behind World Party. It was a small, private show and he struck me as a fascinating character – a tiny, slightly impish, rock and roll leprechaun.

As for Way Down Now, the song makes paranoia sound positively engaging.

Concrete Blonde was one of my favorite discoveries while in college and I quickly snagged each and every album the trio released, though most of their records were uneven.

Bloodletting was their momentary breakthrough with Joey becoming a hit and the title track getting some airplay on modern rock stations, too. But, for me, the wistful Caroline was one the band’s finest songs and featured some riveting, serpentine guitar courtesy of James Mankey.