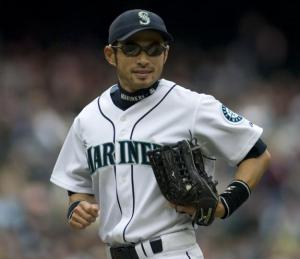 Although my interest in baseball has waned considerably over the past two decades, one player who has intrigued me is Seattle outfielder Ichiro Suzuki.

First of all, he’s from Japan, and the Japanese contributed mightily to my childhood. Hell, in the ‘80s, we were told of how they would soon be our overlords and annex the US, replacing all workers with robotos.

(and everything would be adorned with those cool rising sun logos)

There have also been articles detailing that, in addition to being a spectacular hitter, a speed merchant, and possessing a cannon for an arm, Ichiro is rather eccentric (and not unlike Mr. Roboto).

How eccentric is debatable as his interviews are conducted through an interpreter although he is, apparently, fluent enough in English to annually give a pre-game speech to his All-Star teammates that supposedly contains every profanity known to man.

His eccentric ways were recounted last week in an odd encounter with Ichiro which fellow All-Star Jason Bay blogged about.

Paloma was patiently listening to my astounding tales of Ichiro when I expressed that I would watch a reality show featuring him.

She suggested, in a stroke of genius, he be paired with Buckethead. The mere thought of it had me ready to pop popcorn anticipating a show which doesn’t exist, yet, if there’s any cosmic justice, should.

Buckethead, for the uninitiated, is a tall, lanky guitar wizard who performs wearing a mask and Kentucky Fried Chicken bucket on his head. Briefly a member of Guns ‘N Roses, he gives rare interviews using a puppet, claims to have been raised in a chicken coop, and has worked with an array of acts including Bootsy Collins, Iggy Pop, and John Zorn.

Ozzy Osbourne tried to recruit for his band, but he was troubled by Buckethead’s refusal to remove his mask.

The union of Ichiro and Buckethead would seem to hold incalculable comedic value.

I don’t want the “reality” that is currently being offered to me by housewives in New Jersey, MTV, or Denise Richards.

No, the reality of a Japanese baseball superstar and a bucket-wearing guitar maestro – living as roommates, arguing over who left dirty dishes in the sink through an interpreter and a puppet – is a reality which I could enthusiastically embrace.

I haven’t heard a lot of Buckethead’s music, although it is quite obvious from what I have heard – and to paraphrase Ozzy’s assessment – as a guitarist, he’s a motherf**ker.

The Homing Beacon is a song he’s written in tribute to Michael Jackson and available on his website, Bucketheadland.

The song is sad and sweet and hardly as frenetic as his music which I had heard.

Actually, Cibo Matto might be well cast as the neighbors to Ichiro and Buckethead.

Apparently, Buckethead, like Rob Zombie, is a fan of slasher movies and his masked persona was inspired by Michael Myers from the Halloween movies.

Perhaps Rob Zombie could be cast as the landlord – kind of a tattooed, dreadlocked Mr. Roper.

Col. Sanders Would Have Never Been Such A Slave To Vanity…Would He?

Has plastic surgery now become the norm, nothing more than regular maintenance for every other person I see? I caught Mary Tyler Moore while channel-surfing recently and she frightened me – truly, deeply, profoundly. She’d probably be a perfectly, attractive woman for her age, growing old with grace and style. Instead, she frightened me and made me think she and Joan Rivers should go bowling together.

And then, there’s Kenny Rogers. A friend once used to joke about having calculated some formula for projecting the age of his next wife. The wives and girlfriends kept getting younger. Hey, older guys have always gotten the cool, younger chicks since junior high, right? Summer of eighth grade, Kate, a girl with whom I (and most of our class) was smitten) was dating some high school junior from our hated, rival high school. Drove a Trans-Am, as I recall (him, not her).

But I digress. I saw a picture of The Gambler online last week and…well…There are guys on the website, Men Who Look Like Kenny Rogers that look more like Kenny than Kenny these days. I think that he should have gotten a Trans-Am. I don’t want Kenny to give me the heebee jeebees when I see a picture of him because, like Kramer and Newman, I thought the man made a mean bird. Do Kenny Rogers’ Roasters still exist?

The point is that aging is a natural thing and I’m not quite sure who all of these people think that they are fooling with their nips and tucks, additives and preservatives. I want to see Mary Tyler Moore and think what a brilliant comedic foil she was for Dick Van Dyke, how lovely she looked in Capri pants, and wonder if Morey Amsterdam ever tapped that. I don’t want to recoil, aghast with fear. I want to see Kenny Rogers and deeply ponder the life lessons he taught us as The Gambler, speculate if it was the wood that made that chicken so good, and not be concerned that, if he smiles too broadly, his eyes might burst from his head as though they were spring-loaded.