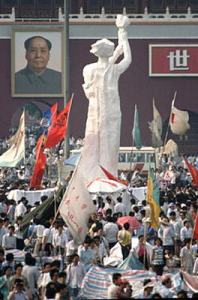 Not long ago, I was considering what has been the most extraordinary thing that I had witnessed live on television as it happened.

Sadly, most of the events that bobbed to the surface – the shuttle Challenger explosion, the Gulf War, the second plane hitting on 9/11, the US invasion of Iraq – provided credence to the assessment of the medium by one of the characters in John Irving’s novel A Prayer For Owen Meany…

And the one event that this viewer would put at the top of such a list began with the gathering of thousands of Chinese students to mourn the death of pro-market, pro-democracy and anti-corruption official, Hu Yaobang.

It was April, 1989 and the name Hu Yaobang meant nothing to me. I had a gauntlet of rapidly-approaching spring finals with which to contend.

I had moved into a house just off campus a year earlier and it was the first time I had ever had cable television. The television in our living room was never off. Even in the middle of the night, there was usually at least one of the six of us watching something or crashed out on the couch.

The mass of mourners gathered for Hu Yaobang had mushroomed into a series of national protests in China; thousands of Chinese students from universities across the country were making their way to Tiananmen Square, calling for a free media and government reform.

CNN was beaming us footage ‘round the clock.

For two weeks, it was the greatest show on Earth.

And they were winning.

The Communist Party was bumfoozled as to how to handle the situation as the entire planet held a collective breath, watching the history playing out.

And, of course, it all came crashing down on the night of June 3rd. The Goddess was pulled down and perhaps thousands were massacred.

Two days later, CNN offered us the final image – the iconic footage of one lone student stopping a column of tanks as they rolled out of the Square. 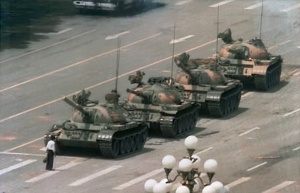 I had a shift at the record store.

And I had a new understanding that the idealism of youth (or the youthful in spirit) would always be the underdog to frightened old men with tanks.

Patti Smith – People Have The Power
from Dream Of Life