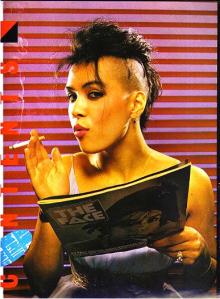 One of the cable stations is running some week-long airing of the movies in the Rocky series.

I remember seeing the first movie in the theater in ’76 when the film was captivating the country and I’ve never seen an audience more electrified . It’s a stellar movie.

Numbers II and III were decent popcorn flicks, but by the time I got dragged to number IV, things had reached a cringe-inducing point.

That aside, I had to watch the opening montage to Rocky III when I happened across it if for no other reason then to hear Survivor’s mighty Eye Of The Tiger. The movie and that song arrived during the summer of ’82 – the summer before my friends and I entered high school – and both were inescapable during those three months.

But watching as Mr. T laid waste to one opponent after another as Clubber Lang, I realized that it might have been the first time I had ever seen someone with a mohawk.

It was 1982 and the big bang of punk rock had come and gone without us even noticing in rural Indiana.

That was the summer that Bow Wow Wow had a hit with I Want Candy and, if we’d had cable and MTV, I might have seen the video and the band’s mohawked and fetching lead singer Annabella Lwin.

As it was, I might have seen a photo of Annabella in a music mag or, on a rare trip to an actual record store, on an album cover.

So, perhaps the first person that I ever saw with a mohawk was Annabella and not Mr. T.

In real life, the first time I ever recall seeing someone in public with a mohawk would have been autumn of ’82. Our freshman football schedule included a road game with a school whose name we didn’t know – Triton Central.

It was a formidable sounding name and, as we were unfamiliar with the school, the game stood out on our schedule from amongst the usual opponents. As the game drew closer on the calender, there was considerable chatter.

Someone on our team had a girlfriend who had a cousin from the next county who knew a girl who had moved to their school who had been a cheerleader at her previous school – Triton Central.

(or some such equally credible relay of information)

Rumors swirled in the weeks before the game of our opponent having a linebacker who was so frighteningly good that – much like Forrest Whittaker’s character Charles Jefferson in Fast Times At Ridgemont High – you’d have believed he lived somewhere more glamourous and “just flew in for games.”

The kid’s name was spoken of in hushed tones.

It was said that he had a mohawk.

He was – as rumored – a middle linebacker and, as I recall, he wasn’t bad but hardly the next Jack Lambert. I do know that I had to block him on one play.

It was a task which – as a wide receiver – I approached with same enthusiasm which most wide receivers have for assignments that don’t involve the ball being thrown to them.

(actually, I put forth effort on blocking plays, I just wasn’t a good blocker)

I don’t remember the play where I blocked this superhuman being as any more eventful than most, but I do remember that the kid did, indeed, have a mohawk.

And I wondered to myself if he was really from a small town like the ones dotting our part of the Midwest or if “he just flew in for games.”

Impresario Malcolm McLaren had poached the members of the Ants from Adam and, needing a singer for the new outfit, added fourteen-year old Annabella Lwin, who had been discovered singing along to the radio in a laundromat.

Within a year, the group known as Bow Wow Wow, had its first UK hit with the manic Go Wild In The Country.

from I Want Candy

In the States, Bow Wow Wow would be best known for their cover of The Strangeloves’ hit from the ’60s, I Want Candy. The song had all of the elements that would be associated with the band – chanted vocals, a bit of surf rock, and tribal drumming – in a sugar-coated pop song.

Surprisingly, I Want Candy would become an iconic song of the early ’80s yet never reach the Top 40. I know that I never heard the song on radio at the time and, as I recall, my friends and I were familiar with the song from a friend who had the cassette I Want Candy, a compilation of previously released UK material.

from I Want Candy

Like I Want Candy, Louis Quatorze had originally appeared on the 1982 EP The Last Of The Mohicans, a four-song release that had stirred up controversy with its cover reproduction of Édouard Manet’s painting The Luncheon on the Grass.

Needless to say, we were all quite smitten with Annabella who, though roughly our age, was unlike any of the girls we knew from school.

from When The Going Gets Tough, The Tough Get Going

Though remembered for I Want Candy, Bow Wow Wow actually had a second minor hit when the infectious Do You Wanna Hold Me? scraped into the lower portions of Billboard‘s Hot 100 in 1983.