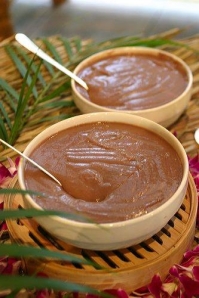 The mashed foodstuff of Polynesian people is what this particularly stressful stretch of work has reduced my brain matter to.

(and one of these days I do intend to seek clarification as to when, if ever, it is acceptable to end a sentence with a preposition…I thought it was verboten…or maybe not in certain situations…)

Today about the only thing that I was able to hold in my head after the commute was TSOP (The Sound Of Philadelphia) by MFSB.

(better known as the theme for the music show Soul Train)

I happened to hear it on the Sirius ’70s hits channel on the morning commute when my brain existed in its usual, relatively unpulpified state and, since then, my headspace keeps defaulting to the song and voices singing “People all over the world!”

I recall seeing commercials for Soul Train as a kid and seem to recall that, at least when I was pre-school age, that the show aired mid-day on Saturdays, following the conclusion of the morning’s cartoons.

The show’s animated intro, that colorful train boogieing down the tracks, duped me more than once into thinking that there might be a half hour more of cartoon hijinks.

Instead, I probably switched the channel to Kukla, Fran and Ollie.

As March ended in 1974, I was finishing first grade and having no way of knowing that, thirty-seven years later I’d still be spending my days sitting at an assigned desk performing mindless tasks ad nauseum as someone – someone who the universe has seemingly placed in charge most arbitrairily – drones on and on and has everyone compete for gold stars.

If I had known, I could have had my brains removed and head filled with poi three decades ago.

As April arrived in 1974, MFSB’s TSOP (The Sound Of Philadelphia) was a Top Ten hit. Here are four other songs that were on the charts at that time…

I vividly recall hearing Bennie And The Jets playing from the jukebox in a pizza place our parents would take us as kids. I was six at the time, had little interest in music, and had no idea who Elton John was – even though he was having a run of hits rivaled pehaps only by The Beatles

But I loved the spacey, hypnotic Bennie And The Jets.

The song is still near any list I would make of favorites by Sir Elton.

I’ve noted before that I’m strangely ambivalent about Billy Joel. If you asked me if I liked Billy Joel, I’d probably shrug and say something like, “He’s OK.”

But when I do hear one of his songs, I’m surprised at how often I pause, mentally list his songs in my head, and realize that the guy does have some truly fantastic tracks in his catalog.

I’ve always loved Piano Man even if it has been played into the ground, but I don’t remember hearing it in ’74.

Apparently Canadian Terry Jacks decided to record Seasons In The Sun when the Beach Boys abandoned recording a version of the song. In the same Wikipedia entry it is noted that the song is one of less than thirty to ever sell over ten million copies worldwide.

Oddly enough, I heard Seasons In The Sun the other morning for the first time in years on the Sirius ’70s station. But I certainly remember it from its time as a hit.

I like the song. It is maudlin, but the bouncy melody hooks me. The song’s got a bit of a split personality.

Though I didn’t see the movie until I was much older, I remember the buzz surrounding The Exorcist when it was in theaters. I seem to recall my parents (or at least my mom) walking out on it.

It is an evocative piece of music that no doubt is made more so by its association with the movie. The only other thing I’ve ever heard by Mike Oldfield is his very cool original version of Family Man, later a hit for Hall & Oates. I do know that he seems to be held in high regard, though, so I have add him to the list of acts I need to check out.