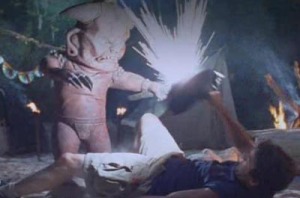 Oh how true that statement is and, thanks to a bout of insomnia and Piñata: Survival Island, I can now rebuff anyone that uses that line as a selling point.

If you’re a piñata enthusiast – and, really, who isn’t? – or simply have an interest in really bad movies, Piñata: Survival Island might just be for you.

I cannot recommend it as “so bad it’s good” as I only caught the last ten minutes and that brief glimpse led me to believe that it’s so bad, it’s just bad.

(it’s the kind of movie where you mumble to yourself, “Someone actually believed this needed to be written down?”)

I was channel-surfing, minding my own business, when I was confronted with…well…it appeared to be the little tiki idol that caused so much mayhem when the Brady Bunch went to Hawaii.

This tiki idol, though, was much larger, breathing fire, and rampaging through the jungle wielding a battle axe.

Understandably, my hand froze on the remote as I watched, boggle-eyed.

Piñata: Survival Island is not without star power. There is, of course, the tiki which had burst forth from a piñata.

And, one of the survivors of the piñata creature run amok is Jaime Pressly formerly of My Name Is Earl and currently shilling for the restaurant chain Zaxby’s.

(home of the most sodium-laden chicken in the Western world)

In fact, it is Pressly who dispatches the evil spirit by quickly and deftly assembling a Molotov cocktail and handcuffing it to the creature’s ceremonial headdress.

It also stars Aeryk Egan who seemingly put more thought into making his stage name a bastardization of Eric than in choosing his roles.

(or perhaps in choosing an agent)

The fact that the film was showing on AMC, which allegedly stands for American Movie Classics, is another kettle of fish altogether.

I do feel enriched and enlightened for the experience. It’s not often that I will have the opportunity to write about piñatas and, for that, I am grateful.

And, if any of you are now filled with a sense of urgency to seek out this film and are unable to find Piñata: Survival Island, try Demon Island.

Sadly, my music collection is sorely lacking in piñata songs. So, here are four island songs…

To a lot of young music fans who came of age during the mania surrounding The Police and their album Synchronicity, Sting was the paragon of cool.

(of course, there were a lot of folks who also consider(ed) him to be an insufferable, pretentious twat)

The moody Island Of Souls came from Sting’s third solo album, The Soul Cages, and, even though I own several of his albums released since, it was really the last one which I awaited eagerly and listened to devotedly.

(though our paths would kind of cross years later)

Island Of Lost Souls…nothing more than a wholly transparent attempt by Blondie to duplicate the success of The Tide Is High from their previous album, Autoamerican. There are a handful of good songs on The Hunter, the trainwreck of a follow-up to Autoamerican, but I wouldn’t consider this to be one of them.

However, it is always amusing to hear Debbie Harry sing the line, “Hey buccaneer, can you help me put my trunk in gear?” and, personally, even bad Blondie is something for which I have a weakness.

I snagged a copy of Gentlemen Take Polaroids on a whim, having read acclaim for the band from critics and praise from a couple of friends (both of whom, as I recall, actually preferred the band’s Tin Drum).

I liked the chilly, electronic music and on tracks like Taking Islands In Africa it’s not difficult to hear Duran Duran’s claim of Japan as an influence.

I’ve noted that I never truly went through a metal phase as a high school kid (though I have long dug Iron Maiden), so I vividly recall seeing Peace Sells… in the record bins and being immediately dismissive and disinterested.

Oddly, over the past twenty-five years, I’ve become a fan of Megadeth’s thrash metal and gained an appreciation for their groundbreaking sound. It’s not something I listen to often, but there are times when a track like the galloping Devil’s Island is just what’s needed.