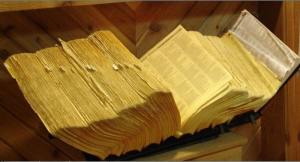 I’m not sure when I first heard those words – out of print. It might have been leafing through a Phonolog.

The tedium was the packet of loose leaf pages that would need to be snapped into the book. As the Phonolog was invariably at the front counter, this placed one precariously in the sightline of every bumfoozled customer.

(I cannot speak for all record stores, but, in the ones in which I worked, customer service was far down the list of concerns, well behind things like smoke breaks and hormonal pursuits)

(as an exception to the above declaration, Paloma was admirably, unfailingly, and most exceptionally patient with the people)

Anyhow, as I first discovered music and was spending time and (allowance) money in record stores, the Phonolog was the source. And sometimes the source would reveal that the item you sought was out of print.

It was a disappointment.

As a record store employee, telling a customer that something a customer wanted was out of print was opening a Pandora’s Box of problems.

“Well can I special order it?” and “Would another store have it?” were two of the most popular responses for those who didn’t simply shrug and walk away.

One well-known, local club DJ reacted to “out of print” as though I had shuffled up to him in bloodied surgical garb and told him that a loved one was dead. He was inconsolable.

(it was quite melodramatic)

Explaining the concept of out of print to older customers could often go off the rails and quickly. It was often taken as a criticism of the music that they were seeking.

One old fellow (who had mistakenly called me “ma’am” from behind) eyed me suspiciously as I told him the album he wanted was out of print. He angrily interrogated me for twenty in an impromptu kangaroo court.

Finally, I simply told him that there were albums that I wanted which were out of print. It’s economics, man.

His clenched fists quivered with rage in the most genuine “you kids get off of my lawn” moment I’ve ever experienced.

I’m not sure if anything is truly unavailable these days. I do know that I’ve owned a lot of music that had gone out of print at one time or another.

The Motels- Shame
from Shock

The Motels had a sizeable following in the late ’70s/early ’80s – first as an underground band; then, with the hits Only The Lonely and Suddenly Last Summer (see the video for the latter at The Hits Just Keep On Comin’).

They were a good band and worth checking out beyond the hits. Martha Davis was one of the sultriest, most dramatic singers of the period and reminded me of a female Jim Morrison. Shame was their last hit song in ’85 and, unfortunately, seems to be forgotten.

This song was (apparently) a small hit in 1985, but I don’t think I ever heard it on the radio. It was in the movie Real Genius, though, and my friends and I were quite familar with Real Genius as it was always on cable. (fortunately, it’s a fun flick)

I knew The Payola$ from another ’80s soundtrack – their song Eyes Of A Stranger was in Valley Girl. That song was chilly New Wave not unlike The Cars. You’re The Only Love was a mid-tempo ballad but bright and shiny.

Not a bad song, but it’s nothing to get excited about either.

Real Life – Send Me An Angel
from Heartland

All-Music Guide describes Real Life’s debut as Duran Duran-inspired and I wouldn’t disagree. It’s very much an album of the times with a serious dose of New Wave synthesizers.

Of course, Send Me An Angel hasn’t been forgotten and most folks would recognize the ethereal song upon hearing it.

Phantom, Rocker & Slick was two Stray Cats – Slim Jim and Lee – and guitarist Earl Slick, who had been a member of David Bowie’s band in the ’70s. The union lasted for two records, their self-titled debut arriving in autumn of 1985.

For some reason I recall hearing this song during the fall of my senior year in high school. Several friends and I had trekked up to Butler University in Indianapolis to hang out.

I do know that the first time I heard Men Without Shame, the song had my attention. It rumbled and howled, welding glam rock to the rockabilly revivalism of Stray Cats. I was quite pleased to find Phantom, Rocker & Slick on vinyl recently and it still sounds as good.

out of print, Paul Hyde And The Payolas, Phantom Rocker And Slick, Real Life, record stores, The Motels |