Where Do All The Freaks Work Now? 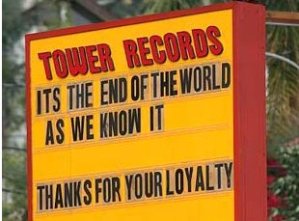 It’s not breaking news that a confluence of numerous forces has altered the music industry, changing the game for music fans forever. One result of these changes, though, is the demise of the brick-and-mortar record stores that were so prevalent for forty years.

These stores were often the refuge for freaks and social misfits and, with the vanishing record stores, these folks are not unlike animals driven from an ideal habitat by the clearing of a forest or prairie. Where will they go?

For a moment, I thought coffee shops, but I don’t know if a barista could get away with the antics that we did in the store at which I worked for several years (at least not at such high volume).

Our store was probably one of the fifty biggest in the States and we had a constantly rotating cast of 50-60 employees. I served for seven years and have been gone for more than a decade, but for years after I’d be approached by strangers who knew me from the store.

There was a core staff, though, which took on the structure of an incredibly dysfunctional family of the tattooed, pierced, and those with multi-colored hair (with more in-breeding than you’d find in Deliverance).

We had something for everyone – Goths, punks, skaters, stoners, metalheads, Rastas, and more, including some carbon-based lifeforms that were simply unidentifiable. The one thing that most of us had in common, aside from a desire to evade responsibility, was a love for music. It was the customers (or mufkin gumbies as we called them) for whom we had little use. Ironically, this disdain was actually viewed by many as part of our store’s charm.

We had a bomb threat. We had fights. We had adventures with shoplifters who, in addition to having to deal with the cops, would be subject to the staff’s scrutiny of their items. Our jazz expert, a burly kid with hair to his waist and a beret, would rifle through the CDs from the foiled heist, labeling each one “weak ass shit.” Once, he stopped mid-inspection, looked up at the thief in custody and shook his head. “Man,” he sighed, approving of the choice – a Barry White disc – if not the method of acquisition, “you were stealing the Walrus Of Love.”

We had a security guy whom we dubbed Quest For Fire for his lack of evolutionary success. We had a Cheech, a Nappy, a Vegas, a Mustafa, a New Broad (she worked there a year and remained dubbed New Broad for her entire tenure), and The Frenchman. We had more rumors than Hollywood. We had two former employees that wrote Belinda Carlisle’s Mad About You. We had one couple that actually got married.

I met my Paloma, who was the store artist.

We spent innumerable hours at the restaurant next door where happy hour started at 11:00 and ran for the rest of the day. I spent a six-month stretch honoring one of my favorite cinematic characters by having cake and several glasses of wine for lunch. We had an esprit de corps fostered by better living through chemistry.

We were a fine example of the inmates running the asylum.

The sheer number of free music I got through those years, as anyone who has spent time in a similar environment will know, was staggering. Five thousand CDs? Eight thousand? Maybe ten thousand? Here’s a few surprising gems I chanced across…

Fossil – Josephine Baker
When I became the buyer for our record store, it was not uncommon for me to receive upwards of 150 promo CDs in a given week. They were filed in stacks around my apartment, two feet-, three feet high. It was often Paloma who would pull something out which I had missed or not even heard. I believe Fossil’s album was one of them.

There’s scant information out there on the band. They were from Jersey and they only released one full-length album, but, perusing the comments on Amazon, those who heard it fell in love with it as much as we did. It’s well worth the couple dollars for which you can certainly acquire it.

The Devlins – Someone To Talk To
The Devlins debut was one which I believe I turned Paloma on to – two Irish brothers by the name of, not surprisingly, Devlin (or, as Paloma – who has some mental block with their name – calls them, The Delvins).

One of the writers over at the most excellent Popdose did an interview with one (both?) of the Devlins recently and I actually had the chance to see them live, years ago, when they opened for Sarah McLachlan.

Kent – 747 (We Ran Out Of Time)
There is (was?) a cigarette brand called Kent and I also have a dear friend named Kent. This is neither. Instead, Kent is a Swedish band that arrived on US shores around the time that Radiohead was blowing up and their sound is comparable – epic and melancholic.

Like The Devlins, I had the chance to see Kent live. It was at a three-day festival and, as fate would have it, I was the only one among my friends who had heard (or heard of) Kent. And, as fate would have it, the band performed at the same time that Isaac Hayes was performing on another stage. My friends opted for Isaac; I went with Kent (and, quite honestly, feel no regret over the decision).

Satchel – Suffering
Satchel really deserves an entire blog entry to themselves. A friend at Sony turned me on to their debut, EDC, and the band was an off-shoot of the Pearl Jam off-shoot Brad (which had featured Pearl Jam guitarist stone Gossard).

EDC was, quite simply, a masterpiece – moody and ethereal with lead singer Regan Smith’s amazing vocals at the forefront. Predictably, the album stiffed. In fact, I’ve been told that EDC was the worst-selling album in the history of Sony which is bafflingly inexplicable given the quality of the record (as well as the equally poor-selling – and equally brilliant – follow-up The Family) and the Pearl Jam connection.