The Not Contractually Obligated Top Ten Of 2012 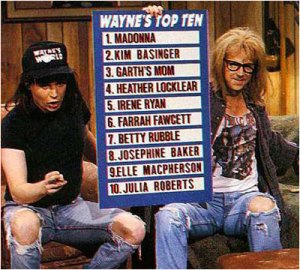 Four years ago, I reflected on the annual, childhood tradition of spending New Year’s Day with a half dozen blank cassettes as Q102 played back the Top 102 songs of the previous year.

So, as 2012 begins its fade into a speck in the rear-view mirror, here are the most popular songs that appeared here during the past year…

from Carry On Up The Charts (1994)
If It’s December, It Must Be Christmas

“On one of the however hundred or so cable channels, NBC is airing It’s A Wonderful Life.”

“At some point last year, I started a semi-regular tradition of pulling up a Hot 100 chart from Billboard magazine and dissecting the debut songs for a given week in the early ’80s (when I was first listening to music and most familiar with Top 40 radio).”

“I know that Walter Sobcheck does, indeed, give a @#%! about them. He was willing to send Smokey into “a world of pain” for a foot foul in The Big Lebowski.”

“In early 1985, the shift in my musical interests, which had been evolving and changing in fits and starts for a couple years, was ongoing.”

“As I opt to periodically do – when I have no other viable or unviable ideas – it’s time to pull up an old Billboard magazine Hot 100 chart and note the songs that debuted that week.”

“I suppose that for someone as fascinated by primates, both of the skyscraper-climbing and planet-ruling sort, as I apparently am, The Monkees should be a favorite band for, if nothing else, their name.”

“I keep seeing some television commercial, touting some MMA bout. With bagpipes blaring over fight footage, some participant is in the frame spouting Irish proverbs in an accent that I’m not quite sure is Irish or Scottish.”

“The candidates have not yet formally been nominated and I am already fatigued by the quadrennial excercise in slapstick that is the presidential election.”

from Mood Swing (1984)
Cheese, Crackers And The Voigt-Kampff Test

“Having had a reaction due to the ingestion of a certain plant-based substance, I once rampaged my way through several boxes of crackers, leading my housemates to dub me ‘Cracker Vacuum.'”

“In the last few days, I’ve rediscovered the music of The Dream Academy, a band which I had loved and forgotten (despite owning all three of their albums).”

The Monkees And Me 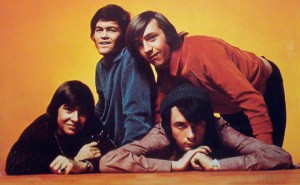 I suppose that for someone as fascinated by primates, both of the skyscraper-climbing and planet-ruling sort, as I apparently am, The Monkees should be a favorite band for, if nothing else, their name.

In what passes for my reality, The Monkees have been an act that has mostly been a part of the pop culture landscape with the foursome periodically popping up on my radar such as this week with the news of Davy Jones’ death.

I might have caught The Monkees via their television show during the late ’60s, but as The Monkees initial run ended about the time I was beginning to walk and talk, I suspect I truly became aware of the show, the band, and the music from reruns in the early ’70s.

However hazy those memories are, I do remember watching The Monkees and being quite enamored by their small-screen shenanigans. It was the manic hijinks that was the hook for me as a pre-schooler with the music being something that merely accompanied the zany antics of Davy, Mickey, Mike and Peter.

I can’t say that I favored any of the four over the others, but Davy Jones certainly stood out for both his lack of verticality and his British accent.

Jones also famously caused Marcia Brady to get all googly-moogly and this too made an impression as I watched reruns of The Brady Bunch after school.

Of course, The Monkees were a musical act and, even before I truly became interested in music, I knew more of their music than I likely did by any other group including the quartet that provided inspiration for The Monkees creation.

Like The Monkees themselves, the songs were part of the pop culture landscape, something that had simply always existed. I never owned much of their music, but, if I happened upon one of their hits while surfing the radio dial, I probably paused.

It occurs to me now that the theme song to The Monkees had to have been one of the earliest pop songs to which I knew all the words. It served as an appropriately playful greeting to each episode.

Like The Monkees’ theme song, The jangly Last Train To Clarksville was written by the songwriting duo of Tommy Boyce and Bobby Hart. Years later, in the early ’90s, a couple of friends would occasionally share drinks with Boyce at our favorite watering hole and I’m thinking that I met the songwriter at some point.

It’s been rehashed ad infinitum how much credit The Monkees truly deserve for their musical success given that the band’s hits were written by outside writers. The breezy Pleasant Valley Sunday was penned by the legendary songwriting team of Gerry Goffin and Carole King.

I’d have to put Daydream Believer on any short list that I might compile of songs that make me involuntarily smile. It’s pure sunshine and about as bouncy a song as I can think of.

Keep The Faith, Frenchman, Maybe We’ll Get Another Cold War 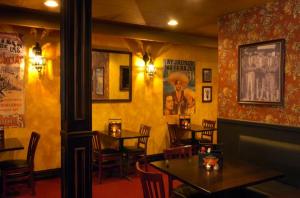 The Frenchman was also an integral component of a gang of us from that store who would head directly to our neighborhood bar following our shift. With respect to my knowledge of music, Frenchy might have been the straw that stirred the drink.

Yes, get several rounds into the evening at our local cantina and The Frenchman was likely to – with no relevance to the ongoing conversation – make a declaration such as – “Colonel Sanders! A great American.”

He would also mourn the end of the Cold War, a period when “We knew who the enemy was. We didn’t like them and they didn’t like us.”

But, The Frenchman – who was a good fifteen years older than the rest of us – had accumulated a frightening amount of knowledge of rock music (pre-1980 – that line of demarcation drawn when the saturation of Kansas, Styx, Journey and their ilk on radio drove him to abandon most hope for the music to come).

This knowledge would spill out of him with reckless abandon as the bar would reach closing time, supplemented with his own personal tales. He had drummed for one of those bands that come thisclose to breaking. He and his bandmates had befriended a, then, up-and-coming R.E.M.

At some point in the evening, The Frenchman would usually raise his index finger and remind us that, “I did something once.”

He never did divulge what “something” was. We simply knew that he had done it once.

Personally, I’m grateful on many levels that the secret was never revealed. The possibility of some kind of Crying Game moment aside, the mystery – the tradition – of not knowing was more compelling.

Paloma’s suggestion to contact The Drunken Frenchman held no allure to me. He was a side character – a very unique one, no doubt – and he’s served his purpose in my life.

I have no doubt that sharing a drink with him now would leave me feeling like I had seen some anemic remake of a classic movie.

With Will Farrell cast as the lead.

But, as a toast to The Drunken Frenchman, here are some bands of whom I know he would approve.

The Byrds – So You Want To Be A Rock & Roll Star

The Who – I Can See For Miles

The Monkees – I’m A Believer