Very Tall Humans And Light Rock In The Night 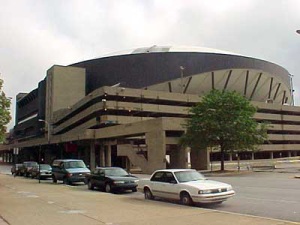 As a kid in Indiana, the town gym was packed for our high school’s basketball games.

The streets of our town were even more deserted on winter nights if Indiana or Purdue had a game on television.

And yet, though there was an NBA team in Indianapolis – a mere hour or so away – I don’t remember anyone really even knowing if the Indiana Pacers had a game most nights.

This was during the late ’70s and Bird and Magic hadn’t yet raised the profile of the NBA. My friends I were fans and the weekly game on CBS was must-see viewing, but we were fans of certain players and each of us adopted the team of our favorite as ours.

No one I knew claimed to be a Pacers fan.

(I loved the great George Gervin, so I followed – as much as I could in a pre-cable/pre-internet world – the San Antonio Spurs)

One of my first memories of the Pacers was a telethon held on the independent television station to help the team sell tickets and ensure it didn’t fold.

The team’s name was dreadfully uninspired and there was no compelling superstar.

(I have proposed to a friend that, should I acquire great wealth, I would purchase the team and rename it the Indiana Children Of The Corn)

Sometimes on weekend nights during the season, I’d catch the last quarter of a game on the same independent channel before watching Nightmare Theater.

I’d be sprawled out on the couch, watching the Pacers lose again,and be grateful I was on the couch awaiting a bad horror flick and not braving the frigid winter elements to be at the game.

But it was on such a night, in early December 1981, that I ventured to Market Square Arena to see a Pacers game. One of our neighbors had an uncle in his mid-twenties who offered to take several of us to a game.

Jay had played hoops in high school. He had height at 6’5″ or so, but he had the athleticism of a tree.

(we were impressed by the height, though)

I truly remember no details of the game aside from the fact that Indiana played the Detroit Pistons. This was a couple seasons before Detroit’s run of great teams in the ’80s and their recent history had been as pitiful as the Pacers.

I think I mostly just stared down at the court with a sense of awe. Seeing NBA players live had an element of scale that television couldn’t capture.

Maybe that night is a tipping point at which music was beginning to hold as much interest to me as sports. Though my memories of the game are minimal, I vividly remember the ride home. It was late, there was a light mix of sleet and snow falling, and I could barely keep my eyes open as we drove through the night.

And the radio was on, tuned to a light rock station out of Indianapolis whose call letters I can’t recall.

from The Innocent Age

I’ve noted before that it seems that each and every used record store I visit has plenty of Dan Fogelberg vinyl in the bins. Apparently not everyone held onto them, but the bearded troubadour sold a lot of albums in his day.

And he also had a lot of radio hits during the late ’70s and early ’80s most of which I was fairly ambivilant toward. I always enjoyed hearing the now seasonal staple Same Auld Lang Syne (especially at the holidays) and Run For The Roses will get played as long as they run the Kentucky Derby.

But of all of Fogelberg’s work with which I am familiar, it’s hard not to be drawn into the singer’s gentle ode to his father,

I was surprised when I first saw the man who gave voice to the late ’70s light rock classic I Go Crazy – he looked like a long lost Allman Brother who should be raising some hell rather than delivering melancholic ruminations on a love affair gone sideways.

Of course, Paloma and I’ve pondered Paul Davis in the past.

from Tonight I’m Yours

By the late ’70s/early ’80s, Rod The Mod was still having hits and selling records, but his adoption of elements from the disco craze of the time on songs like Do Ya Think I’m Sexy? and Passion had alienated some long-time fans even as it earned him new ones.

Young Turks found Stewart chasing trends again, giving the song a synthesized, New Wave vibe, but I always dug the song which chronicled the tale of Billy, Patty, and their ten-pound baby boy.

The group Sneaker not only took their name from a Steely Dan song (Bad Sneakers), but longtime Steely Dan (as well as Doobie Brother) guitarist produced the band’s self-titled debut.

I snagged a copy of the album trolling for vinyl and it’s definitely got that laid-back, shuffling sound so typical of Southern California pop acts of the period. Their lone hit, though, was the airy ballad More Than Just The Two Of Us that is so wispy it makes Air Supply sound heavy.