My brain is mushy from work.

And I am under the sway of the Olympics.

So, as I opt to periodically do – when I have no other viable or unviable ideas – it’s time to pull up an old Billboard magazine Hot 100 chart and note the songs that debuted that week.

1983 is always good as I was surfing more of the radio channels, beginning to gravitate toward album rock but still interested in the pop stations. That autumn, 97X would debut and I’d discover the exotic sounds of modern rock.

The one song from these debuts with which I was not familiar was Kissing The Pink’s Maybe This Day. The British synth-pop act would shorten their name to KTP and have another minor hit a few years later with Certain Things Are Likely, which I do remember, but Maybe This Day? Nothing.

Maybe This Day shuffles along punctuated by muted horns, but I can hear why it wasn’t a big hit. It reminds me a bit of Naked Eyes, who were having great success at the same time, but not nearly as catchy.

I can’t hear Holiday Road – the theme song from National Lampoon’s Vacation – and not want to cruise through a desert in the American Southwest in a station wagon with a dead aunt strapped to the roof on the way to a theme park thousands of miles from home.

Growing up om a small town was underscored by the occasional visit of my buddy Beej’s uncle from Cincinnati. The fellow had an enviable collection of New Wave albums, EPs, and twelve-inch singles by artists we often wouldn’t hear of until months later (or sometimes not at all).

Most American listeners wouldn’t hear Tears For Fears until 1985’s Songs From The Big Chair which had the hits Everybody Wants To Rule The World, Shout, and Head Over Heels.

Beej’s uncle had made us familiar with the name Tears For Fears during the summer of 1983 when The Hurting was released. A few months later, I found 97X where I heard Pale Shelter and the shimmering Change.

In ’83, I was still becoming acquainted with Led Zeppelin’s extensive catalog beyond Led Zeppelin IV (a locker room staple) and I was completely unfamiliar with Robert Plant’s solo debut from the year before.

I quickly became well acquainted with Plant’s follow-up, The Principle Of Moments, when it arrived as summer was slipping away. Not only was the languid Big Log becoming the singer’s first Top 40 single, I was hearing other tracks from the album like In The Mood and Other Arms on the rock stations.

Beej might have heard of Spandau Ballet from his uncle, too, but I remember him mentioning the New Romantic act from seeing their videos on Night Tracks.

Of course, anyone listening to the radio late that summer and into the fall would have known True. The lush ballad was a mammoth hit and one of the enduring songs of the period (currently heard in some car commercial).

The song wasn’t my cup of tea at the time. The sophisticated crooning of Tony Hadley held no appeal to me, but, other the past three decades, I’ve succumbed to True‘s charms.

Elton John was no longer the radio juggernaut he had been as my interest in music was beginning to develop, but the man was still having hits. In 1983, John’s Too Low For Zero would lead off with the upbeat I’m Still standing and, as the year wound down, the ballad I Guess That’s Why They Call It The Blues would be inescapable.

Sandwiched in between was the rollicking Kiss The Bride, another track that, like Spandau Ballet’s True, I have a greater fondness for now than I did at the time.

I didn’t really like rockabilly revivalists The Stray Cats when their Built For Speed became a smash in late 1982 and Rock This Town and Stray Cat Strut were constantly on the radio. They were a band that might have existed when my parents were in high school which was not a selling point.

Friday Night Videos And The First Chill Of Autumn

The living room of our treehouse is a very cozy nook to me.

From the second floor perch at the corner of a T intersection, there is often a steady flow of traffic and pedestrians to observe.

A friend once called and asked what I was doing.

“Watching Afternoon Traffic Theater,” I replied, describing the actual scene playing out down below, some twenty-yards away – two middle-aged woman who had had some minor mini-van tête-à-tête.

I covered the incident until its underwhelming conclusion without lifting my head from the back of the couch and with most of my attention focused on ESPN.

But the room is usually a calm place with the traffic usually nothing more than a steady, soothing background hum almost like the urban equivilant of ocean surf.

It’s a glorious place to have the windows open.

Tonight, there’s something in the air that arrived with the setting sun a couple hours ago.

(aside from a very luminous moon through the tree branches)

For the first time, as summer ends, there’s a chill in the evening air that is unmistakeably autumn to me.

As a kid, that hint of chill was the signal that the months of sleeping with the bedroom window open – a necessity growing up in a ’70s-styled ranch house with no central air – was coming to an end.

The hum of the interstate, a mile down the country road running in front of the house but audible at night, would soon no longer be lulling me to sleep.

When that chill arrived in 1983, it did so a mere six weeks or so following the debut of Friday Night Videos.

MTV wouldn’t be available to us until the following summer, though my friends whose families had cable had been watching music videos on WTBS’ late-night, weekend show Night Tracks all summer.

Though video clips for songs had existed for years, MTV had become a phenomenon in the early ’80s and Friday Night Videos offered those of us without cable ninety minutes each week to feel like we were living in the modern world.

With a mere ninety minutes less commercials, Friday Night Videos had little time to show more than videos that were popular songs or new. In 1983, Billy Idol’s Dancing With Myself was neither.

The song had appeared on Idol’s four-song EP debut from two years earlier, but, since its release, the singer had a couple hits from his self-titled full-length album with Hot In The City and White Wedding.

I don’t think that I ever heard the energetic and catchy Dancing With Myself on the radio, but the apocalyptic, zombie-filled video seemed to pop up on Friday Night Videos each week until Idol’s Rebel Yell album was released later that fall.

With the sultry vocals of lead singer Martha Davis and their moody style of New Wave-tinged rock, Los Angeles’ The Motels had broken through the year before with the Top Ten ’80s classic Only The Lonely.

As I headed back to school in 1983, the band had issued its follow-up, Little Robbers, introduced by the single Suddenly Last Summer. The wistful, almost eerie song became a second Top Ten hit for The Motels and the song’s video apparently featured one of Davis’ daughters.

(and, somewhere out there, there might be a compilation of The Motels featuring liner notes by yours truly)

from Rant N’ Rave With The Stray Cats

I didn’t really like rockabilly revivalists The Stray Cats when their Built for Speed became a smash in late 1982 and Rock This Town and Stray Cat Strut were constantly on the radio. They were a band that might have existed when my parents were in high school which was not a selling point.

Fridays On My Mind 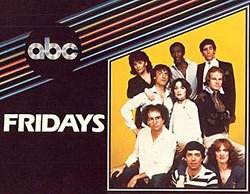 Out of nowhere the other night, the show Fridays popped into my head and I was rather surprised to find it there. Fridays was a late-night, sketch comedy show that aired in the early ‘80s as a rival to the similar Saturday Night Live.

I’m not sure why, but I didn’t really watch SNL until high school and haven’t watched it since the mid-’90s. The first show of its type which I was watching was Fridays (and, on occasion, Second City Television).

Of course, really the only thing that I could remember about Fridays was that Michael Richards had been a member of the cast and they had a lot of musical guests whom I was – at that time – mostly unfamiliar.

I did a bit of research and found that it aired for two seasons beginning in April of 1980. It had an interesting mix of guest hosts including George Carlin, Marty Feldman, Jamie Lee Curtis, and Madeline Kahn.

(if you had been in a relationship with Madeline, wouldn’t it have been impossible to not indiscriminately bellow “Kahn!!!” ala Shatner?)

Richards was, indeed, a cast member, notably involved in a strange prank with Andy Kaufman. and known for his recurring character Battle Boy, a hyperkinetic boy who finds new and creative ways to destroy his toy soldiers (fire was usually involved). Larry David, also instrumental to the success of Seinfeld, was in the cast, too (which I hadn’t remembered).

As for the musical guests…it’s a pretty compelling list of acts that wouldn’t have been getting much exposure on radio at the time in my part of the Midwest.

The Boomtown Rats, The Tubes, Devo, The Jam, The Plasmatics, Split Enz, Jim Carroll, Ian Hunter – all performed on the show.

There were also guests who were more mainstream and who, even though I was only beginning to care about music, I knew like Kenny Loggins, Journey, Tom Petty, The Cars, Pat Benatar, Eddie Money, Scandal and Quarterflash.

As I was transitioning from junior high to high school during Fridays ‘s run, I didn’t always get the humor, but I remember my friends and I being entertained by the show. Each episode was a source of banter for the next several days.

And it gave me the chance to hear some music and artists for the first time.

The Clash – Train In Vain (Stand By Me)
When The Clash were on Fridays in April, 1980, “the only band that matters” had recently released their album London Calling and the group had broken through on radio in the States with Train In Vain. It was one of the songs they performed on their first appearance on American TV.

Stray Cats – Rock This Town
Although Stray Cats’ Rock This Town wouldn’t be a hit on American radio until the autumn of 1982, the song had already been released in the UK a year earlier when the trio from Long Island performed it on Fridays. Like The Clash, their appearance served as Stray Cats’ introduction to television audiences in the US.

The Cars – Touch And Go
TV.com credits The Cars with two appearances on Fridays. I do remember seeing them perform Touch And Go from their album Panorama. Moody and menacing, Touch And Go wasn’t one of The Cars’ biggest hits, but it’s always been a favorite of mine.