I’m Waiting For The Rain Man 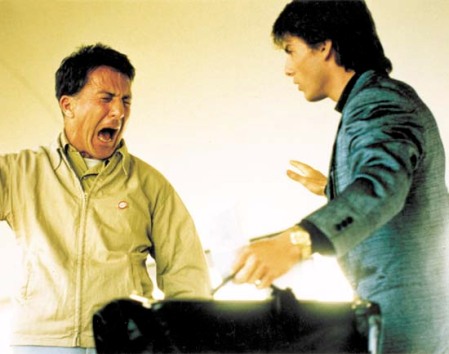 Some bloggers whose writing I regularly enjoy incorporate recurring segments into their mix.

JB over at The Hits Just Keep On Comin’ has One Day In Your Life, Whiteray has the weekly Saturday Single at Echoes In The Wind, and the Major Dude of Any Major Dude With Half A Heart has several regular features.

Alas, though I might have recurring subject matter, I haven’t had the imagination or commitment to post such an ongoing series.

(psychobabble apparently being a train that runs on no fixed timetable)

I have posted several times of my discovery of alternative rock when I first tuned into 97X. The station, a pioneer in alternative rock radio, is also secure in pop culture lore for its reference in the movie Rain Main as Dustin Hoffman incessantly repeated the station’s tagline “97X, Bam! The future of rock and roll.”

So, when I happened upon the movie the other night, inspiration struck. I thought, why not post a handful of random tracks from the 97X playlist I’ve created. And, why not do so each time I do come across Rain Man while channel-surfing (or, at other arbitrary times).

However, I think I might hold off on giving a name to this random ongoing series until I decide to keep it…

Here are four random tracks that I would have heard on 97X back in the day as well as Freur’s Doot Doot, the song which led me to rediscover the station twenty years after I last listened to it…

Coincidentally, I mentioned Don’t Change this past week in a post and it shuffles up on the iPod first. I declared it to be brilliant then and nothing has changed my thoughts on the matter in the past seventy-two hours or so (or, really, twenty-five years or so).

Don’t Change is simply a transcendent four minutes and change.

from In My Tribe

By 1987, the only time that I got to listen to 97X was on the rare treks home from college. I was already hearing 10,000 Maniacs a lot at school as Natalie Merchant and the band were college rock darlings at the time.

Years later, with mainstream success for the band and Merchant’s solo career, people seemed to either adore the singer or think she was insufferably precious. She was granola. I once saw her open for R.E.M. and she stopped her set for five minutes tending to an errant moth that had landed on stage.

I dug some of the Maniacs’ stuff and Merchant’s as well, and What’s The Matter Here is some melodic folk-tinged pop gem despite the grim subject matter.

This song immediately makes me think of the movie Heavy Metal. Though Devo’s Working In The Coal Mine is probably their better known song from that flick, Through Being Cool was in it, too.

Devo is a bit like Sparks to me. Both were quirky and underappreciated for their twisted pop. I had a high school friend who was wildly into both bands, so I got to hear a lot of their music. I thought much of it was wonderful stuff and I’ve always meant to go back and delve into their catalogs.

I absolutely loved Concrete Blonde in the late ’80s/early ’90s. Their music was so gritty, usually (bitter)sweet and responsible for how I’ve always imagined Hollywood to be.

Their records could be erratic, but all had scattered treasures. I think I’d go with Mexican Moon as their most consistently strong and rewarding album, but Bloodletting wouldn’t be a bad choice.

The album is burned into my memory as one of the soundtracks to my last winter living in the Midwest. It suited the short hours of daylight, the shadows, and the chill autumn air. And I still can vividly recall being stretched out on the couch with notes, not studying, and seeing the video for Joey in the wee hours.

It captivated me then and it still does.

Doot Doot (The Future Must Be Now)

The movie Rain Man had a personal connection. It had nothing to do with autism, though I did have an ex-girlfriend who once accused me of being slightly autistic.

The early portion of Rain Man – where Tom Cruise first meets Dustin Hoffman – takes place in Cincinnati, a city about forty-minutes from where I grew up and known to us as The City. So, I was familiar with some of the landmarks and places mentioned.

However, the real connection was when Cruise and Hoffman hit the road. Hoffman’s character tunes the radio to WOXY out of Oxford, Ohio. You might recall Hoffman incessantly repeating the station’s tagline – “97X, Bam! The future of rock and roll.”

97X just happened to be my station of choice for several years in high school. Oddly enough, according to the station’s page on Wikipedia, it began broadcasting as a modern rock station in September, 1983 and I had stumbled across it a month or so later.

It was even the station where I first heard Cyndi Lauper and Nena before they became mainstream pop sensations on Top 40 radio.

The thing that triggered me to think about 97X wasn’t coming across Rain Man on cable. Instead, it was a far more surprising event – a television commercial.

I’m not even sure what the commercial was pushing on me. It was the music that caught my attention. It was a song by a Welsh band called Freur called Doot Doot (not to be confused with Trio’s Da Da Da or The Police’ De Do Do Do De Da Da Da).

Freur was short-lived, but members of the band would go on to be Underworld and be global with their wonderful song Born Slippy from the movie Trainspotting. Apparently, Doot Doot was Freur’s lone hit in the UK and a small on – #59 – at that. I think it did little here in the States.

But I did hear it numerous times while listening to 97X in the winter of ‘83/84. I even had it recorded on a cassette. I haven’t heard it on the radio – or elsewhere – in twenty-five years.

I wouldn’t describe Doot Doot as rock and roll, but it certainly seems as though 97X knew something about the future.

I was surprised to hear Modern English’s Melt With You in a commercial.

Of course, Melt With You was a fairly popular song in 1983 even if it wasn’t a massive mainstream radio hit. In seven years of working in record stores, I can remember seeing anything by Freur once, on an ‘80s compilation.

I hope the commercial makes it a hit twenty-six years later. It’s sparse and spacey with the earworm of a chorus being little more than the title.

Is there a more obscure song or artist to be used to sell humans products two decades after it was released?

During the winter of ’83/’84, few things could make the day less dreary than hearing the bouncy Oblivious. Whatever name you want to pin on it – New Wave, modern rock, alternative rock – there were some classic pop melodies in the ’80s.

Tom Tom Club- Pleasure Of Love
from Close To The Bone

Sure, everyone knows Genius Of Love (another ’80s song that’s made its way into a television commercial), but Talking Heads’ spin-off Tom Tom Club have released a handful of worthwhile albums.

Though not as groundbreaking as Genius Of Love, Pleasure Of Love, is, like most of Tom Tom Club’s songs and in the words of a friend, “music to eat pineapple to.”

ABC – That Was Then This Is Now
from Beauty Stab

ABC’s debut The Lexicon Of Love is widely regarded as a classic ’80s album. It wasn’t as wildly popular in the US as it was in the UK, but The Look Of Love and Poison Arrow got played on even the most pedestrian of Top 40 stations which I was listening to at the time.

That Was Then This Is Now, the first song from their follow-up, was something of a shock upon arrival. Yes, lead singer Martin Fry still croons (he can do nothing else), but the music is harder, more guitar-oriented, not the lush New Romantic/Roxy Music we had all come to know.

I liked it. The song wasn’t around long and I pretty much forgot about it ’til years later. It seems as though Beauty Stab is held in higher regard now than it was then.