“Music To Eat Pineapple To” 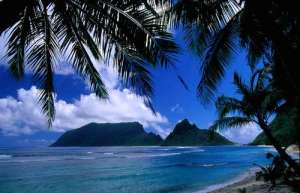 I’ve been thinking of Samoa more so than usual of late.

(and I think of Samoa often as it is)

That might sound odd, but I’ve long been fascinated by the territory (which, to be technical, is American Samoa, but that kind of kills the exotic vibe). Mostly it is because of the ridiculously disproportionate number of professional football players who have come from the collection of islands in the South Pacific.

For years, my friend Eric and I have nurtured a dream to purchase the Oakland Raiders. Neither of us are fans of the team, but we figure our best bet to ever own an NFL franchise is to trick Al Davis into signing the team over to us.

We would then move the franchise to Hattiesburg, Mississippi merely to test our theory that you could place a team in any city and, unless the team is run by two idiots, it’s like printing money.

(and we are just the pair to make it a challenge)

And, as an homage to the cumbersome, nonsensical moniker of the Los Angeles Angels Of Anaheim (or whatever the hell it is), we rechristen the team the Oakland Raiders Of Hattiesburg.

The final piece of our plan was to field a team comprised of only Samoan players. They play hard. They’re tough. They don’t behave like complete jackasses when they make a meaningless first down late in a blowout game.

Alas, it remains a dream. It does, though, remain one of our most-enduring schemes we ever conjured up during a late night with drinks.

The dream got pulled to the forefront a few weeks back when 60 Minutes aired a piece on football and how large it looms in the culture of tiny Samoa. Forget Texas and Friday Night Lights. Pago Pago is where it’s at.

And the high school kids profiled were mammoth – sixteen year-olds standing 6’3″, 6’4″, tough as nails, playing on fields of volcanic rock.

I watched the report and was transfixed – an island paradise populated by soft-spoken, courteous people who love American football more than Americans.

I looked over at Paloma, pointing to the screen, not saying a word.

“And what would we do in Samoa?”

And I know that there is one profession for which Paloma would relocate to the middle of the South Pacific.

There are probably better odds that Eric and I actually hoist the Lombardi as co-owners of Oakland Raiders Of Hattiesburg.

The sum experience I have as a radio personality is having known a few and hanging with my buddy Streuss a handful of times during his shift at our college station. So, I’m impressively unqualified to be a DJ in Samoa or anywhere else in the civilized (or uncivilized) world.

I’m not sure what the people of Samoa might want to hear on the radio, but I’ve always remembered a record store co-worker in college describing the playful grooves and the laid-back vibe of Tom Tom Club as “music to eat pineapple to.”

I vividly recall the first time I heard Tom Tom Club’s oft-sampled classic Genius Of Love. It was on America’s Top Ten, the truncated, televised version of Casey Kasem’s weekly radio program. He showed the video as – I think – it was in the R&B Top Ten.

I was just becoming devoted to an interest in music in the spring of ’82 and was completely mesmerized and baffled at the colorful cartoon video for the song. It was unlike any of the music I was listening to at the time – hell, I’m certain I had no idea who Talking Heads even were.

But the song totally captivated me and, nearly thirty years later, it still does.

from Close To The Bone

By the time Tom Tom Club released their second album, in autumn ’83, I knew who Talking Heads were and, drawn in by Burning Down The House, I was becoming a fan. And, despite the Heads’ growing audience, Close To The Bone didn’t get nearly as much attention as Tom Tom Club’s debut.

It’s too bad as it’s a worthy follow-up. The modern rock station which I had discovered gave a lot of airplay to the breezy Pleasure Of Love and the twitchier The Man With The 4-Way Hips.

It took Tom Tom Club four years to follow-up up Close To The Bone and another four years to issue Dark Sneak Love Attack. I didn’t pay quite as much attention to either album, but their bouncy cover of the Hot Chocolate song is fun.

from The Good, The Bad & The Funky

One of the curveball’s in Tom Tom Club’s catalog popped up on 2000’s The Good, The Bad & The Funky with the cosmic love song Let There Be Love. Guest vocalist Charles Pettigrew gives a soulful performance that makes me think of the wonderful Terence Trent D’Arby.