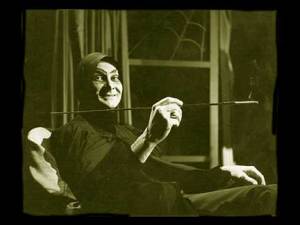 The other night, the cable offerings were rather uninspiring, but, as it was after dark, I stopped on the remake of The Hills Have Eyes.

The flick wasted little time getting to the carnage, opening with a group of scientists clad in protective gear being torn apart by some savage creature. It was gruesome but hardly shocking.

What has stuck in my head is a scene that came later, after the vacationing family had broken down taking a shortcut through the same remote stretch of desert.

It wasn’t the family dog getting gutted or the patriarch being beaten to a pulp then set aflame. No, it was a scene in which one daughter in the family gave the finger to her sister.

The defiant digit was blurred out.

Pondering the interesting choices in censorship aside, the movie made me miss the horror flicks on which I had grown up in the late ‘70s and early ‘80s.

I’m not referring to the movies of that time but rather the late-night television fare in a world without cable on our local independent station (usually the only one still on air after midnight).

These were mostly B-movies from the ‘50s, ‘60s, and early ‘70s and often in black and white. Sometimes they were surprisingly eerie, rising above their budgetary limitations, but, often, they were laughably shoddy or dated – bobble-headed alien invaders, puppet creatures and hippie vampires.

It was the latter which held the most entertainment value for me and and my buddy Will who lived a few houses down. Not yet old enough for cars, girls, or guns, we’d hang out in his living room on Saturday nights for appointment television.

Saturday night was the night for Nightmare Theater, hosted by the ghoul/zombie Sammy Terry (pictured above), who would add his commentary during commercial breaks or banter with a fake spider named George who “spoke” in squeaks.

We’d howl with amusement at every bad pun Sammy would deliver and yell, “George!” in unison the first time that rubber spider would descend into the scene.

As we reached high school, life was suddenly about cars and girls. There weren’t as many viewings of Sammy, but it was always fun to catch the show on occasion.

Years later, crashing out and watching Nightmare Theater was an incentive to make the trek home from college.

Here are four songs for Halloween that Sammy might have enjoyed…

Not long ago, a client was giving me his last name. “Ramone,” he said. “Like the band. Do you know who I’m talking about?”

He was surprised and duly impressed as I explained that I not only knew his reference, but that Paloma has a framed poster autographed by Joey, Johnny, Dee Dee, and Marky hanging in our treehouse which she had received from the seminal punk rockers.

All You Zombies, with its reggae hitch and portentous lyrics, hooked me first time I heard it in late winter/early spring of 1985. Though Nervous Night left me mostly underwhelmed, the Philadelphia band’s debut had several hits over the next year or so.

Their second record came and went pretty quickly (though I thought it had a couple of decent tracks), but main lyricists Rob Hyman and Eric Bazilian have certainly received some nice royalty checks over the years for penning Cyndi Lauper’s Time After Time.

Though apparently having quite a following in Hollywood, Oingo Boingo was nothing more than a band with a cool name to me in the early ’80s. The one time I ever heard a song by the band was hearing Dr. Demento play their song Insects on his radio show.

Then Oingo Boingo notched a near hit in 1985 with their title song for Weird Science. I don’t recall hearing Weird Science on the radio, the flick was a cable staple for me and my buddies, so I was well acquainted with the song.

Back To School, with Rodney Dangerfield and Sam Kinison, was a staple for us a year later during our last summer before we headed off for college.

And there was Oingo Boingo performing the übercool Dead Man’s Party at a Halloween party in the movie.

The tale of The Shaggs is quite a ripping good yarn, beginning in the hinterlands of New Hampshire in the late ’60s and seeing the Wiggins sisters become cult heroes, lauded by Frank Zappa and Kurt Cobain decades later.

Hearing The Shaggs for the first time is a memorable musical experience. At one large record store where I worked, it was tradition to play The Shaggs at some point during the closing shift on Halloween.