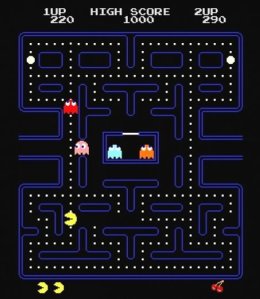 It wasn’t the cleverest of names, but it was so generic that it now strikes me as endearing. It could have been any arcade in any small, Midwestern town in 1983, but it was all ours.

Our town wasn’t unlike the one in the movie Footloose (undoubtedly a major reason why that flick was such a mammoth success). Of course, we did have a bowling alley, a public pool, and probably a dozen bars – the ratio of places to drink to our population had to be equal to the average town in the UK. Any (all) of those establishments might have been verboten in Footlooseville.

For the couple of years during which The Zap existed, though, it was pretty much the hub of my friends and my world. It was the dingy command center for our plots, plans, and schemes in a minimally remodeled building that had housed a beauty salon and an auto repair garage

Not that we required much. The Zap had refrigerated air and concrete floors, providing cool in the humidity of summer (although it also was frigid in the winter). It had video games and pinball machines. And it had a jukebox.

The jukebox is one rite of passage that I’m grateful I am old enough to have gotten to experience. The jukebox was common to us all, but there was also specific etiquette of which you were familiar if you were a regular.

It also had to be one of the earliest financial dilemmas we faced as kids – burn through your limited funds playing Defender or Robotron or selecting a few more songs on the jukebox.

I think I usually opted for more music. So, here are a few the songs that emptied my pockets and kept me from notching stratospheric scores on Asteroids.

The Pretenders – Back On The Chain Gang
I didn’t know much by The Pretenders aside from Brass In Pocket and…maybe that was it. But it was easy to fall in love with this song. It was wistful yet defiant. It sounded so hopeful, but it was a hard-earned hope.

But my friends and I certainly loved Twilight Zone. The whole dark undercurrent of the lyric welded with that driving music made the song a universal favorite at The Zap, cutting across all social lines and musical divisions.

Chris DeBurgh – Don’t Pay The Ferryman
My friend Brad used to go spend a couple weeks with his father in Arizona every summer. Upon his return, he would awe us with cassettes of songs he had taped off the radio stations “out there”(it was quite an exotic trek to us). There was a lot of New Wave and songs which we wouldn’t hear on our stations ’til often months later.

Anyhow, I remember hearing Don’t Pay The Ferryman on one of those cassettes. Like Twilight Zone, it had a mysterious, dread-filled lyric. As for DeBurgh, I always thought he kind of resembled Dudley Moore which gives the song a slightly comical bent to me now.

Billy Squier – Everybody Wants You
During my junior high/high school years, Billy Squier was a rock god to most of my hometown’s kids. Of course, he was toppled from that exalted position as minor deity by the infamously bad video for Rock Me Tonight. (I’d include a link, but if you’ve read this far, you know the video)

But when Emotions In Motion came out, he was still cool and Everybody Wants You was constantly playing from a radio or car stereo. In fact, DJ Mark Sebastian from Q102 in Cincinnati played the damn song repeatedly one night on his shift (like for an hour or something, I can’t exactly recall). There was considerable water-cooler talk at school the next day following that stunt.