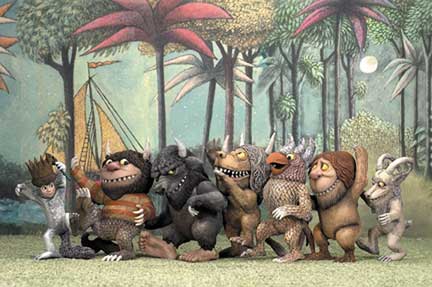 Maybe it’s been the events of the past week, or work, or the rain (I swear it’s been raining since August), but there’s been a dearth of nonsensical thoughts and/or whimsical mayhem in my head.

But, I have become certifiably and irrevocably stoked at the upcoming release of Where The Wild Things Are.

The trailers look amazing and the imagery and choice of music – Arcade Fire’s Wake Up – is pretty powerful. It’s caused Paloma to get a bit teary and it’s affected me, too. Based on the online chatter, it seems we’re not alone in our reaction.

Maybe it’s the vibe of those clips and the palpable undercurrent of childhood lost that resonates so much. Maybe it taps into some desire to sail away to a land of fantastic creatures.

Maybe it’s the fact that we’re part of a generation who were children when the book was just beginning to be recognized as a classic and – for many of us – the book is among our earliest memories.

There were numerous trips to the library as a very small child that ended with me poring over those pages, utterly mesmerized by the iconic artwork and spellbound by Max’ adventure.

Quite simply, I find myself invested in this movie like few I’ve known in my lifetime. It’s one of those situations where I find myself so hoping that it will brilliant and instill in me the same sense of wonder and awe that the book did when I was four.

I’m aware that I might be creating unrealistic expectations, but, based on what I’ve seen so far, I’m thinking that director Spike Jonze just might pull it off.

If so, I can’t wait for the rumpus to begin.

from Where The Wild Things Are trailer

There’s been a lot of hulabaloo over Arcade Fire for some time, but I was left underwhelmed at the few songs I had heard. Not Wake Up, though. Maybe it’s because it is now and forever connected to me through its use in the movie’s trailer.

Its use in the trailer is inspired (I’d say perfect), fusing together poignantly with the visuals and snatches of dialogue.

There’s something about the dynamics of the song that remind me of Smashing Pumpkins and, like the Pumpkins, the song has an epic scope. It’s towering and majestic and sounds as if it was written specifically for the movie.

Arcade Fire, childhood, Uncategorized, Where The Wild Things Are (film) |

Like most people, I would prefer the days to unfold like the colorful pages of a Dr. Seuss book, populated by the playful antics of furry, non-existent creatures and lots of nonsensical rhyming.

Unfortunately, there’s a lot of reality to real life and it’s not always easy or pleasant.

I’ve known Paloma for nearly twenty years and, for most of that time, I’ve known Coltrane. She had found Coltrane in a garbage dumpster, a tiny ball of black fur that someone had left for dead.

Coltrane had found someone who would give her a home.

I’ve stated before that I am a dog person, but when Paloma and I became a couple and, later, when we moved in together, I made an effort to embrace the felines that came with her.

I didn’t understand them.

They wouldn’t curl up and watch sports with me like my dog had. They certainly wouldn’t fetch. I had no idea what was on their minds.

‘trane was, perhaps, the most inscrutable to me. She was calm, contented, and a mystery. Buddhist monks would have envied her zen-like state. Sometimes she would give me a gentle head butt.

Though she was old, she was healthy. She moved at a leisurely pace, but she retained remarkable agility.

Over the past year or so, Paloma would, on occasion, comment that she was trying to emotionally prepare herself for the day when Coltrane’s long life would reach its conclusion. I dreaded the idea because I knew how hard that day would be for her.

Then, about six months or so ago, I was writing one evening. Paloma had gone to bed. Coltrane quietly ambled into the living room. I knew what she wanted and scooped her into my arms.

In the kitchen, I doled a portion of one of her favorites into her dish. As she ate, I filled a tumbler full of cold water from the fridge and took it back to the living room.

Several minutes later, ‘trane climbed onto the coffee table and drank from the glass of water. As I rubbed her head, it struck me that the two of us shared numerous daily rituals including this one.

It was that evening that I realized that somehow, perhaps when I wasn’t thinking about it, Coltrane and I had developed a bond. I also realized that the day that I had dreaded for Paloma was now one that I was dreading for myself as well.

Last Thursday, I arrived home to find Paloma tending to Coltrane. The small animal was struggling in her efforts to do the smallest of tasks, tasks that a day earlier she could do slowly but with little trouble or pain.

The spirit was still there – the abiding sweetness – but her small body was failing her.

On Friday morning, Paloma made the difficult but compassionate decision to let Coltrane go. She did so with no hesitation and knowing that it was the one, final act of kindness she could offer ‘trane.

And though it was hard, and though she’ll be missed, it was a peaceful end to a good, long life.

I considered posting some music by Coltrane’s namesake, but one song kept coming into my head the past few days – the closing song from Dire Straits’ guitarist Mark Knopfler’s soundtrack to the movie Local Hero. Much like ‘trane, the movie is low-key, quirky and sweet with a charm that sneaks up on you and is hard to shake.

As for the song, there’s a touch of sadness, but that quickly gives way to a determined melody and concludes with an anthemic, almost joyous close that leaves you feeling that everything’s going to be alright.

Coming Soon To A Record Store Near You (Or Not)

In a previous life, I did a bit of freelance music journalism. For the past several years, I’ve been engaged in far more lucrative albeit soul-sucking work.

That made it such a surprise when I received a message on Monday.

“Yeah, we’re looking for someone to write some liner notes for The Motels.”

It’s been five years since I’ve had an assignment. I leave the house for my grown-up gig at 6:30 in the morning and don’t return for eleven hours. I’m old and I do need eight hours of sleep.

And this label wanted it in forty-eight hours – “two and a half, three panels” on Martha Davis and company.

True, they were used to being able to tell someone “two and a half, three panels” and having them know what that meant, so the question seemed to make them wary of my skills. As I explained, though, I’ve written reviews, bio, and done some interviews, but never liner notes.

I figured what the hell. I was a fan of the band and Paloma and I do own all of their records on vinyl.

It was hardly the most ideal timeframe or conditions to work, but I did manage to hammer out something in two days. Of course, with the time, I would have wanted to speak with some of the principals, but…

And, it might even end up making its way into print.

(of course, who knows in what altered form)

But, The Motels were an underappreciated band. So, here are a few songs that aren’t Only The Lonely or Suddenly Last Summer…

from All Four One