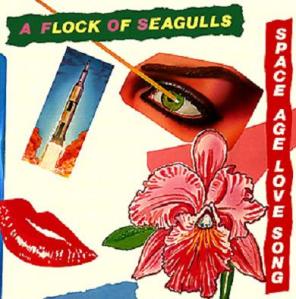 As we closed in on Thanksgiving in 1982, I imagine that it seemed as though summer had never happened and never come ’round again. We were housebound more as raw days of wind and cold, stinging rain were a November staple in our part of the Midwest.

For one of the first Novembers of my life, I had the radio to help battle the restlessness of being a kid confined to quarters. Casey Kasem and American Top 40 was a drowsy weekend morning staple.

But there were sixty songs beyond the ones Casey counted down each week and, though I had heard him reference Billboard magazine and the Hot 100, I don’t think that I’d ever seen either.

(the magazine wouldn’t appear in the racks at the town drug store – a small, family-owned outlet on a downtown corner – for another five or six years)

Put It In A Magazine might have debuted on the Hot 100 as folks were making Thanksgiving plans in 1982, but the song by R&B singer Sonny Charles wouldn’t reach the Top 40 until the following February. I have no doubt that the only time I heard the song was during its brief time on American Top 40.

It didn’t appeal to me at the time, but now I kind of dig the laid-back groove of the song.

Most weeks, the Sunday newspaper would include a list of the week’s Top Ten singles and albums. I vividly recall seeing Robert Plant’s Pictures At Eleven listed and being puzzled as to who this fellow was and how his album could be in the Top Ten if I wasn’t hearing its songs on the radio.

Of course, I had heard of Led Zeppelin and I knew a few of the band’s song even if I didn’t know the name of their lead singer at the time. When Plant’s next solo album, The Principle Of Moments, arrived a year later, I had begun to gravite to the album rock stations on the dial and I was far more knowledgable about Percy.

Scandal might have released their self-titled debut EP in ’82, but I don’t recall hearing Goodbye To You (or its follow-up, Love’s Got A Line On You) on the radio until the following spring.

Goodbye To You might not have been a major hit, but the song – a straight-ahead kiss-off with some New Wave sass – was ridiculously catchy and lead singer Patty Smyth’s vocals made it clear that her affections were not to be trifled with.

When my friends and I first heard the manic Goody Two Shoes, we thought it was hysterical. The fact that it was sung by someone called Adam Ant only added to our amusement.

However, the song was like a sugar buzz to me and it went from fun to grating quickly.

Even folks who lived through the ’80s probably remember A Flock Of Seagulls for no more than their debut hit I Ran (So Far Away), which was a Top Ten single, and lead singer Mike Score’s gravity-defying hair.

That’s too bad as I thought that the band’s blend of spacey synthesizers, effects-laden guitar, and sci-fi lyrics made for an engaging and interesting sound that stood out from a lot of their contemporaries and merited more than a footnote.

Though it wasn’t as successful as I Ran, I preferred A Space Age Love Song from the moment I heard the full album. The song is breathtakingly wooshy and, at the time, it had a sonic vibe that sounded as if it might indeed be perfect for a romantic encounter in a future filled with jet packs and laser blasters.

In 1982, I would have only known Steve Winwood for While You See A Chance, his hit from the previous year, and I certainly didn’t hear Valerie until it was remixed and became a Top Ten hit five years later following his comeback album Back In The High Life.

It’s a pleasant enough song that’s a bit more welcome to me now as opposed to 1987 when the ubiqitousness of Winwood’s music had left me a bit fatigued and unreceptive.

Martha Davis and The Motels had notched a breakthrough hit with Only The Lonely during the summer of ’82, but neither of the follow-up singles – Take The L and Forever Mine – managed to get much attention.

Though it’s hardly as memorable as the melodramatic and noirish Only The Lonely, the sprightly Forever Mine reveals a lighter, more playful side of the band.

I’ve never had the affection for Michael McDonald, either solo or as a Doobie Brother, that apparently the rest of the world has for the singer.

Air Supply was a pop music juggernaut during the first few years of the ’80s when I was becoming acquainted with the radio. So, I heard hits like Lost In Love, All Out Of Love, and The One That You Love and I heard them often.

The songs were breezy and light and, at that age, I assumed that these Aussies had love figured out since it was the subject of every song. I’m sure that I surmised their music could offer me valuable insight into charming the ladies.

Though I liked Tom Petty & The Heartbreakers – at least the few songs that I knew like Refugee and The Waiting – I was more enamored by the video for You Got Lucky than the song. The song that really caught my ear from hearing Long After Dark repeatedly at my buddy Beej’s house was Change Of Heart.

Over the next decade, Petty would earn a place amongst my favorites and I’d grow more fond of You Got Lucky (though the grittier Change Of Heart still appeals to me more)