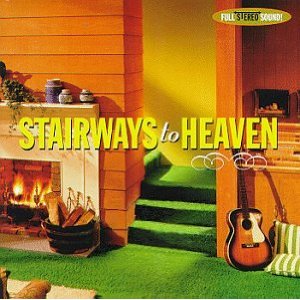 Forty years ago, few people, if any, were sick of Led Zeppelin’s Stairway To Heaven.

Led Zeppelin IV (also known as Four Symbols, The Fourth Album, Untitled, The Runes, The Hermit, ZoSo, and The Old Man And His Bundle – OK, I made up that last one), the magnum opus’ parent album, had been released just a week earlier.

By the time that I started listening to the radio in the early ’80s, John Bonham was dead, Led Zeppelin was defunct, and everyone had already decided that Stairway To Heaven was the greatest rock song of all time.

I was listening to Top 40 stations at the time, but Q102, my station of choice, would also veer from the hits of the moment and play stuff by (now) classic rock acts and (then) current album tracks, so I was familiar with the Zeppelin epic.

The station actually provided me with one of my earliest memories of Stairway To Heaven as, like many stations, there would be periodic contests to reward a certain number caller with cash when a particular song would be played.

If I recall, the prize was usually $102 to tie in with the station’s frequency, but, on occasion, greater amounts were offered.

So, when it was announced that $1000 would be offered to someone when Stairway To Heaven was played, the song had my attention.

I did manage to cajole the parents for clearence to make the long-distance call in an attempt to win what, at the age of twelve or thirteen, seemed to be all the money in the world.

For days I was poised to make the call that would earn me enough cash for a lifetime (or, at least to play Pac-Man until my fingers were numb).

Alas, when the fateful moment finally arrived and that mournful opening played, I spent eight minutes and two seconds getting a busy signal as Robert Plant sang cryptically about “a bustle in your hedgerow.”

Fifteen years or so later, while working as the head buyer in a large record store during a period when it seemed anyone who had ever recorded a note of music was being honored with a tribute album of other acts covering their music, I received a promo of one such item that caught my attention.

According to Wikipedia, the venture had its roots in an Australian comedy/talk-show, The Money Or The Gun, on which each week’s guest would perform their own version of the Led Zeppelin song.

The compilation was a curio, something listened to once and then filed away, only to be taken out to momentarily trip out friends.

“Ever wonder what Stairway To Heaven would have sounded like if…”

…a dozen obscure Australian acts – I recognized two of them – covered the Zeppelin warhorse in styles ranging from a the pomp of a Wagnerian opera to a laid-back reggae groove.

So, to mark Stairway To Heaven‘s fortieth anniversary, here are five versions of the song taken from that compilation…

More people would have remembered laughter had Stairway To Heaven been performed by an Australian B-52s tribute band.

Yes, this is the John Paul Young of Love Is In The Air fame bringing the disco style of his lone US hit to Zeppelin’s classic.

A more than reasonable facsimile of The Lizard King takes the pretentiousness of the song to another level.

Singer/songwriter Robyne Dunn’s version of the song reimagines the song in the style of The Beatles’ Lucy In The Sky With Diamonds.

I had to include actor Leonard Teale’s version performed as a dramatic poem simply because it brings something Seussian to the song.