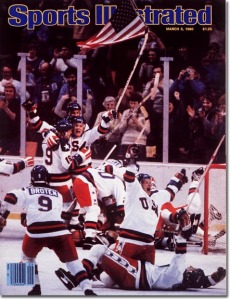 I woke the morning of February 13, 1980, climbed from the warmth of my bed and shuffled to the bathroom down the hall that I shared with my brother. I probably yawned as I turned on the light.

Taped to the bathroom mirror was a scrap of paper on which the old man had written “2-2.”

It was the final score of the hockey game from the night before. The US had tied a favored Swedish team in their opening game of the ’80 Winter Olympics.

Interest in hockey, both personal and in our area, barely registered. The nearest cities to us with professional hockey were Indianapolis and Cincinnati, both of which had franchises in the old World Hockey Association, and that league had folded the previous spring.

We were living in the heart of basketball country.

I don’t even recall watching any of that opening game. It might not have even been televised. Maybe my dad had seen that the US had pulled off the draw with a goal in the final thirty seconds on the late news.

Not much was expected from the team going into the games, even by those who had a passion for the sport.

I’m not sure why my dad felt that my brother and I needed this information at our earliest waking moment.

Maybe he was prescient.

(maybe he should have called a bookie)

Two days later, the US throttled an even more highly-touted Czech team. Now, my friends and I were definitely taking an interest and hockey was suddenly a topic of conversation the next day at school.

That weekend, we were watching as the pucked dropped for a Saturday afternoon match-up with Norway. By the time the US had blistered the Norwegian team 5-1, we were all in.

The next day, caught up in the unexpected run that was gathering momentum and followers, a bunch of us kids from the neighborhood did our best approximation of our new heroes. Half a dozen or so of us played “hockey” for the first time.

We had no rink or even pond. Instead, we had a small patch of ice in a cow pasture where a drainage ditch widened. Wiffle ball bats made for sticks and a frisbee served as a puck. It was good-natured mayhem in the frosty air as we pretended to be Mark Johnson, Mark Pavelich or Rob McClanahan.

(amazingly, thirty years later, I realized that, glancing over the roster of that team, I remember each and every name)

There’s no mentioning those Olympic Games and the US hockey team without trying to view it through the prism of the state of the country and the world at the time.

Iran had seized the US Embassy and Americans were being held hostage in Tehran. The Soviet Union had invaded Afghanistan. The Cold War was an entrenched way of life from which there was seemingly no resolution that didn’t end with both sides charbroiled.

And though things weren’t good, I was twelve and fortunate enough, like most of my friends, to still have lives uncluttered by most of the flotsam and jetsam.

That doesn’t mean that a bleak vibe in the adults wasn’t palpable to us. But as the second week of the Olympics began in ’80, the hockey team was making its way to the medal round and there was something just as palpable as dread beginning to build.

People who had never cared about hockey (or even sports) had fallen in love with this team. People were giddy.

It was as though the entire country had done a bong hit. People were smiling and not even necessarily realizing it. You had a feeling that a lot of folks might start giggling at any moment.

The team was a topic of conversation everywhere. Adults in stores were talking about the team. We kids at school were stoked.

There’ve been a lot of major events that I’ve witnessed in my lifetime and there have been a number of times that this country seemed to pull together, but at no time have I ever experienced anything – including 9/11 – galvanize people to the degree that a bunch of kids playing hockey did for those two weeks.

The difference between that period and other moments that touched a lot of lives is that the ’80 US hockey team’s run wasn’t rooted in fear, grief or sadness. Rather, it was two weeks during which strangers were bound together in hope and excitement, in a belief that something improbable was possible.

It transcended the often petty things that serve to divide.

Everyone held their breath, anticipating what might happen next.

It reached critical mass thirty years ago today, Friday, February 22, when, having reached the medal round of the tournament, the team of college kids faced an overpowering team from the Soviet Union.

The game was played that afternoon and had already been decided by the time most of the country tuned in to watch it that evening on tape delay. With ESPN and cable news now, I suppose that it would be difficult if not impossible to have kept the result a secret.

The Soviets took an early lead. The US rallied. US coach Herb Brooks watched stoically.

The Soviets went back ahead. The US rallied to tie and the Soviets benched goaltender Vladislav Tretiak, regarded as the best goalie in the world.

Meanwhile, US goaltender Jim Craig was under constant siege but continued to turn back Soviet shots, keeping the team in the game.

Finally, captain Mike Eruzione scored, putting the US ahead 4-3 with ten minutes remaining and, I imagine, most of the country again held a collective breath as Craig held off the Soviet onslaught, and, I imagine, most everyone watching counted down those final seconds with commentator Al Michaels.

Less than forty-eight hours later, the US beat Finland to capture the gold medal.

Then, Craig provided one of the iconic images of the tournament. Viewers had come to know how the goalie’s mother had died of cancer several years earlier and, with the bedlam of his teammates celebrating all around him, Craig, draped in an American flag skated along the boards searching for his father in the stands.

The scene had a poignancy that every sports movie since has tried to capture but can’t.

The following week, Sports Illustrated arrived in the mail with the cover capturing the moment after the win over the Soviet team and, in and unprecedented and fitting move by the magazine, no words accompanied the photo.

For those of us fortunate enough to have been a witness to those two weeks, none were needed.

from Fun And Games

There’s simply no other song that reminds me of the ’80 Winter Olympics than Chuck Mangione’s Give It All You Got. ABC, which broadcast the games here in the States, chose to make use of the flugelhorn player’s song as the theme.

Hearing the song now, thirty years later, it immediately transports me back to those evenings that February, sprawled out on the floor of our den watching the nightly broadcast from Lake Placid.

Thirty years from now, it will undoubtedly still do the same.

Miles Of Aisles Of Melissa Manchester

During the nine months or so that Paloma and I’ve been buying vinyl, I’ve noticed certain things. There will always be some album which I’ve never seen and am thrilled to have found.

The next store I visit, I come across another copy of the new-found treasure (like the Korgis’ Dumb Waiters).

Then, there are the certain artists who I feel pressured to buy. There are so many of their albums in the bins of used record stores, I wonder if anyone held on to a copy (or maybe the previous owner upgraded to CD).

Melissa Manchester is one whom I’ve noticed. I could walk into any of the half dozen or so places where we shop for used vinyl and probably find a copy of damned near every album in her catalog, none costing more than a dollar.

It’s been tempting to make the investment.

I don’t really know a lot of her songs, but the ones I do know are pleasant enough. Of course, the only songs of hers that immediately come to mind are Midnight Blue and You Should Hear How She Talks About You.

And speaking of Carly Simon, she too is an act that, like Ms. Manchester, seems to be well represented in used record stores and most of the music she has released could be acquired for less than a pizza from Domino’s.

In Carly’s case, I have a copy of her box set from a decade or so ago – a freebie from her label – which I’ve never explored much beyond the radio hits.

Deep Purple, Boz Scaggs, Kenny Loggins…they’re all there, too.

Most of these artists aren’t ones in which I’ve ever had much interest, at least beyond owning a stray track or two.

Yet I live in fear of them, knowing that one day I may return home from a vinyl-buying venture and, having been unable to resist the inexpensive siren song of some siren’s songs, find myself explaining to Paloma why we now own a dozen albums by Helen Reddy.

Chuck Mangione – Give It All You Got
It is impossible for me to think of Chuck Mangione and not imagine Mick Jagger cranking the music of the flugelhorn player on trans-Atlantic flights with supermodels on a private jet in the late ‘70s.

His music makes me think of shag carpet and the 1980 Winter Olympics for which this song served as the theme (and after two weeks of hearing it on the television broadcasts, I was hearing it in my sleep).

Steve Miller Band – Swingtown
Actually, Steve Miller has already made his way into our vinyl collection (I think we’ve got the greatest hits record and possibly Book Of Dreams).

Even before I was really into music, I knew a lot of Steve Miller songs from his hits in the mid- to late- ‘70s. Fly Like An Eagle, Jet Airliner, and Take The Money And Run were always playing over the public pool’s sound system.

Personally, I much preferred Swingtown which was a staple on the jukebox in the bowling alley where my friends and I killed time before we could drive (and sometimes after).

Gino Vannelli – Wild Horses
I’m well acquainted with Gino’s big hits, I Just Wanna Stop and Living Inside Myself, as they were played often on the local light rock station. My mom was fond of the station and I was indifferent at the time. Once I became interested in music, I wrested control of the car stereo from her in a bloodless coup.

But Wild Horses I quite liked when I heard it on that same light rock station while home from college one spring. Several years later, I’d learn more about Gino than I’d ever imagined I would. Our record store’s receiving clerk (who greatly resembled Mario from the Donkey Kong video game) was a devoted fan of the bare-chested Canadian.

But those hit songs – Alien, Imaginary Lover, Spooky, a couple more – are all wistful and engaging. They sound like a cloudy, autumn day.