We Have How Many Copies Of Pat Benatar’s Precious Time? 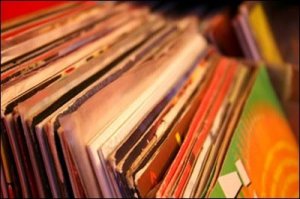 This whole election here in the States has, unfortunately, sucked more mental energy, time and morale from me than necessary the past several weeks. I don’t know if women can any longer accuse men of not understanding what it’s like to go through labor. It’s been exhausting for anyone following these political antics.

But Close Encounters Of The Third Kind is providing me some seriously needed escapism as has sifting through the albums Paloma and I have gathered since we started buying vinyl a mere four months ago.

To my surprise, I realize that there is all kinds of stuff that we’ve snagged of which I’ve already lost track. We have gone from zero albums to 800 or so at an unmaintainable speed. I mean, when did I buy a copy of Robert Plant’s Pictures At Eleven?

I do know the details as I’ve logged it into a database (and one which I suspect some people reading this would find to be woefully under detailed – though my own need for details makes me wonder if I should be concerned).

And the realization that we haven’t listened to so much of what we’ve acquired is surprising. But, by my quick estimation I suspect it would have required us to listen six hours a day – every day – over the past four months to have actually listened to everything.

Maybe I need to make a list of albums I really want to listen to which have gotten lost in the shuffle. (Sparks’ In Outer Space, I’m looking at you).

And so many of the artists and titles now have extra significance. The mere mention of Split Enz will forever be associated with Paloma who, in a fit of her enthusiasm which I adore, purchased ten albums of the Kiwis (at least for now, she regrets it – “The members of Split Enz don’t even have as many Split Enz albums as we do.”).

Of course, my ability to continue buying copies of Pat Benatar albums we already own is a source of amusement to her (or maybe it’s dismay).

So, since thinking about music and things such as these is much more pleasant than letting the election suck all of the oxygen from my head. here’s simply some stuff…

I considered this a steal when I snagged this one (and in good condition) for three bucks. It has to go on the list with the Sparks’ album I mentioned.

I remember seeing the movie late one night on a local station when I was about twelve or thirteen. I have no doubt that when Same Old Scene by Roxy Music played during the opening scenes it was the first time I had ever heard the band. The double album soundtrack also includes a slew of notable acts from the period – Talking Heads, The Pretenders, Ramones, Joe Jackson, Patti Smith…

And a duet between one of the Brothers Gibb (Robin) and Marcy Levy (who, at one-time, was a member of Eric Clapton’s band and was later – as Marcella Detroit – one half of Shakespears Sister).

There has always been a lot of love for Harry Nilsson among friends who were passionate about music, and I’ve known the lore of Nilsson being one of John Lennon’s partners in crime during his “lost weekend.” I didn’t know that he was a favorite of the members of The Beatles and, supposedly, was considered as a possible member at one time.

And, until I put on the album, I didn’t realize how much of his music I actually knew. Listening to his greatest hits was a revelation – simply wonderful stuff. Spaceman was one such “unknown” known track to me (I immediately remembered it being used in the movie Contact) and the strings – courtesy of the legendary Paul Buckmaster -remind me of T. Rex’ Children Of The Revolution.

It so happens that as I finish this entry on this Sunday morning, Lindsay Buckingham is appearing on a morning talk show (it’s what inspired me to throw a song of his into this disconnected mix).

Paloma and I have purchased a lot of Fleetwood Mac on vinyl and been continually amazed at how consistently good they are. Stevie Nicks has no shortage of devotees (and deservedly so), but, for my money, Lindsay is the post-Peter Green genius of the outfit (and an often demented one at that).

I snagged this album for a dollar after repeatedly seeing copies and knowing only that Devito replaced Ellen Foley as Meat Loaf’s duet partner on Paradise By The Dashboard Light. It was worth it if only for the near title track – a very ’80s track and certainly the only song in the history of man to reference both Jimi Hendrix and basketball great Moses Malone.

Cool World reminds me of how much of the music of the early ’80s was like some goofy, technicolor cartoon. Maybe dopey and maybe dated, it’s still infectious fun (something that seems to be missing from a lot of music post-grunge).

This album would be Devito’s sole release and she would later marry actor/director Robbie Benson.