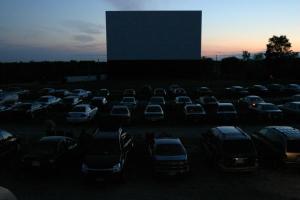 Aside from the ten or so nights a winter when the high school hoops team had a home game, the movie theater just off the square was the hub for nightlife in our town.

The nearest multi-plex was in Cincinnati – an hour’s drive -so it was fortunate that we had relatively quick access to the major movies of the day and, as a kid, the theater was the place to see and be seen.

There was also a drive-in located on a state road a mile or so out of town, surrounded on either side by fields of corn and soy beans.

Me and the kids in my neighborhood lived off that state road and the screen of the outdoor theater was the size of a postage from our homes. During the summer, we’d sometimes be shooting hoops in someone’s poorly-lit driveway and see the flicker of the movie on a Friday night.

Despite our proximity, I don’t think I spent even a dozen evenings there and most of those times had been with my folks, brother and maybe a couple friends before we were old enough to drive.

Once we were old enough to drive, if one of us managed to acquire a vehicle, we were far more likely to hang out at the town square or head into Cincinnati to wander about the city.

In fact, the drive-in wasn’t as much of a hang-out among the high school kids in our class as it likely had been for our parents. But, it was a presence and remained open for a good fifteen years after I graduated from college and moved on.

One of the last times I was in my hometown, I drove by the abandoned drive-in. It was strange to see the empty lot, waist-high weeds swallowing the posts for the speaker units and the screen, standing, but noticeably weathered.

I felt a little like Charlton Heston at the end of Planet Of The Apes.

One venture to the drive-in I do remember is the summer night I talked my parents into taking us to see King Kong. Sure, I’d seen it six months or so earlier, weeks after its release, but this was a chance to see it under the nighttime skies…sitting in the family car…eating popcorn.

And, sweetening the deal was the pairing of King Kong with another Dino De Laurentiis production, Orca, which had just been released that summer.

I was nine and life couldn’t have been better.

I was on the swim team that summer and, though I had minimal interest in music, I heard a lot of music blaring from the radio and above our din on the long bus rides to meets.

I probably heard more music that summer than any summer of my life up to that point. Here are four songs that I very much remember hearing during the last week of July in ’77…

You know, I dig Fleetwood Mac.

Yet Dreams is a song that I was blasé about for years. There were a number of songs on Rumours that I liked better and it kind of bored me.

But, it was Dreams that seemed to be playing everwhere that summer. It’s swimming pools and sunshine to me and, as the years pass, it becomes more of a favorite.

I think that every friend I had growing up had a copy of Greatest Hits (1974-1978) that had been handed down or borrowed from an older sibling (not that the songs weren’t radio staples).

I can’t say that I have much music by Jimmy Buffett aside from a handful of his better-known songs which, personally, is about all I feel I truly need, but it’s impossible not to admire (and envy) the niche he’s carved out.

Though Heart might have had a commercial lull in the early ’80s, the band remained popular on radio stations in our area. Then, the band exploded in the mid-’80s, notched a string of massive hits and platinum-selling albums that not only revived their career but took it to new heights.

Personally, I dug a lot of their mid- to late ’80s hits, but I preferred their less-varnished ’70s stuff. The ubiquitousness of that later period made it easy to forget how much raw energy the band possessed and how utterly fierce they could be.

And Barracuda – driven by Ann Wilson’s piercing banshee wail – was as fierce as a band could hope to be.