The Daughters Of The Lizard King 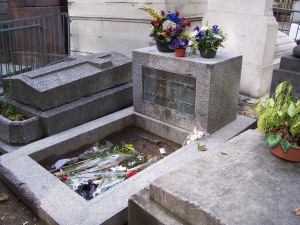 Channel-surfing the other night, I happened across When You’re Strange, the new documentary on The Doors. I walked in late and it was past my bedtime, but I watched half an hour or so.

Maybe it was late and I can’t necessarily remember ever hearing him interviewed before – plus I can only hear Val Kilmer instead – but there was something about the manner in which Jim Morrison mumbled his answers that made me think of Napoleon Dynamite.

I was distracted by the thought.

Though Jim Morrison was dead before I turned four, The Doors have been a presence in my life for as long as I’ve listened to music.

In the early ’80s, the rock radio station in our small town switched formats – rock to country. It truly was for the best.

My mom knew someone at the station – our town’s population was well under three-thousand – and, having noticed my budding interest in music, snagged a box of 45s that no longer fit the format

There must have been a hundred or so singles – some New Wave-styled Alice Cooper song, three or four singles from The Cars’ Panorama (even though the album’s lone hit was Touch And Go), and others I’ve long forgotten.

There was also a handful of hits by The Doors and, thinking back, it must have been the first time I heard the band. I remember People Are Strange and finding it’s vibe to be a bit disturbing. It was like a sudden chill.

In high school, several years later and a dozen years since their final album with Morrison, The Doors were as popular with most of the students as The Beatles or Stones and newer acts like Van Halen, The Cars, and Def Leppard.

I have no idea why. Their songs weren’t played much on the stations we listened to, though there was a new release from The Doors during that time with ’83’s Alive, She Cried live set.

Nearly a decade later, Oliver Stone released his bio-pic on The Doors. I knew their best-known songs – I think I had a copy of The Doors Greatest Hits on taped from a friend – and I’d read a copy of roommate’s No One Here Gets Out Alive, but I wasn’t an obsessive fan of the band.

But Stone was on a roll with Platoon and Wall Street and Val Kilmer was one of the best actors around. I caught a midnight showing at an old theater from the ’50s with several friends.

The place was packed. We were late. The few remaining seats were in the front few rows.

It was a hyperactive flick and a whiplash-inducing two hours and twenty minutes. One scene that stood out simply because it was one moment of calm was a shot of Kilmer as Morrison walking down a deserted street at dawn.

And, both times that I’ve been to Paris, I’ve made the trek to Père Lachaise, where Morrison is buried. Both times the weather was grey, cool, and rainy – one during the chill of a early, spring afternoon; the other, in late autumn.

But the thing that I think of first when I think of The Doors are two girls in high school. Two sisters. One was my age and the other a year younger.

And of all the fans of The Doors in our high school, the sisters were the most obsessive and claimed that Morrison was their father.

OK. It seemed highly unprobable that Mr. Mojo Risin’ had fathered two girls who ended up living in the middle of nowhere, in a town with three stoplights, but the man was a rock star and fond of the ladies, so I suppose it wasn’t impossible, I thought at the time.

And the sisters were adament, clinging to the declaration with the same veracity with which I lock onto a chicken drumstick.

Unfortunately for them, it appears that of the more than twenty paternity suits naming Morrison at the the time of his death, none were pursued against his estate and the only public claim after his death was a man and proven to be a fraud.

But Morrison has remained a pop culture fixture and, though I’ve never progressed beyond being a casual fan, there’s some fantastic stuff in The Doors’ catalog with few frontmen ever matching the charisma and magnetism of the self-proclaimed Lizard King.

Here are four from The Doors…

from The Best Of The Doors

While People Are Strange unnerved me, the title track from its parent album had a more playful vibe to me. Maybe that’s because it somewhat reminded me of the song Gene Wilder croons on the boat ride in Willy Wonka & The Chocolate Factory – “There’s no earthly way of knowing which direction we are going…”

Actually, come to think of it, that kind of makes the song disturbing in its own right.

from The Best Of The Doors

According to Wikipedia. Five To One‘ is rumored to be the approximate ratio of whites to blacks, old to young, non-pot smokers to pot smokers in the US or the ratio of Viet Cong to American troops in Vietnam.

from The Doors Greatest Hits

Poor Robby Krieger. The guitarist for The Doors wrote many of the group’s best-known songs including Light My Fire, but most fans simply assume Morrison penned all of the band’s lyrics.

Krieger also wrote Touch Me, not only one of the band’s biggest radio hits but a song that apparently polarized fans of The Doors at the time with its incorporation of brass and orchestration.

Whatever the case, I think it’s a stellar and insanely catchy pop song.

from The Doors Greatest Hits

Though I’ve had the good fortune to do a fair amount of traveling, the only time I’ve spent in Southern California has been a few hours enjoying the ambience of LAX on a layover. So, my vision of Los Angeles has been forged through films and song.

The bluesy, driving L.A. Woman is one of those songs.

Get Me Eugene Levy’s Agent On The Phone

He might not be part of the Hollywood glitterati like Tom Cruise, Russell Crowe, or any of the other thespians and pretty people that choke the headlines with their antics, hijinks, and shenanigans, but Eugene Levy has carved out a varied and diverse body of work with moments of brilliance.

Younger moviegoers will know Levy as Jason Biggs’ father in the American Pie movies, while an earlier generation grew up watching him as a cast member of the classic SCTV series from the early ’80s (which also featured the talents of John Candy, Catherine O’Hara, Martin Short, Rick Moranis, and others). He’s appeared in more than three dozen movies including Christopher Guest’s stellar mockumentaries, but there is one role that he was born to play…

Those of you who are under 45 or not from Western Pennsylvania might have collectively asked, “Who?”

Iris was the voice of the ’80s hit Ah Leah! – a thunderous slab of crunching guitar riffs and Iris’ otherworldly banshee wail as he yearned for his girl. It was probably his best known song, although he did manage a handful of other hits like Love Is Like A Rock, My Girl, Do You Compute? and Injured In The Game Of Love over the course of half a dozen or so albums in the ’80s .

Iris also performed the national anthem at the 2002 AFC title game before the Pittsburgh Steelers hosted the New England Patriots – he grew up in nearby Beaver Falls – and remains a local hero to this day in the region (apparently, he is now a mortgage broker).

If the past several years have shown anything – with the commercial and critical successes of music bio-pics like Ray and Walk The Line – it’s that Oscar voters love these films. Playing Donnie Iris would be the pinnacle of Levy’s career and most certainly get him some awards show hardware.

And Levy is particularly qualified for the role. SCTV featured some incredibly hip musical guests and Levy provided voices for several characters in the animated cult film Heavy Metal, which was driven by a rock soundtrack including Blue Oyster Cult, Black Sabbath, and Cheap Trick. During the Live Aid/USA For Africa period, Levy was a vocalist on the Canadian offering for famine relief as a member of the all-star group Northern Lights on the song Tears Are Not Enough.

The man also did something that Iris never did in winning a Grammy Award for the song A Mighty Wind from the movie of the same name in which Levy brilliantly played an aging folk singer. Yes, all roads have lead Levy to this end.

If that wasn’t enough, there’s one more aspect that should not be overlooked. Eugene Levy looks so much like Donnie Iris that, in truth, it’s not inconceivable that they are indeed the same person. Consider the photographic evidence… 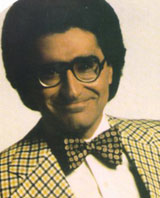 Yes, this one has Academy Award written all over it…

Donnie Iris – Agnes
Although Ah Leah! was the hit from Iris’ debut Back On The Streets, Agnes was also a worthy bit of ear candy with a more frenetic tempo and a lyrical tale of a bar romance gone bad which wouldn’t have been out of place on a Bruce Springsteen album.

Donnie Iris – Do You Compute?
Iris often infused his traditional-style of rock with hints of the New Wave trappings of the day and this track from 1983 put a technological spin on its lyric of unrequited love. And despite the musical heft, Iris’ powerful vocals still effortlessly pierce the surging keyboards and some searing guitar.