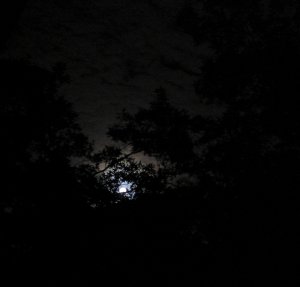 Growing up, there was no house in my hometown that the kids passed warily, whispering amongst themselves as they eyed the dilapidated structure and weed-riddled, overgrown yard reined in by nothing more than a decaying wrought iron fence.

However, I know from the television and movies I’ve consumed over my life, that everyone else had such a landmark in their life.

In fact, I can think of nothing in my small hometown that had a paranormal bent to it – no legends, no lore, no creatures lurking in the woods. There was simply no sinister goings on and never had been.

The closest thing to the macabre I recall was one grave.

On the southwest edge of town, one street led to a small, non-descript bridge which sped travellers into a vast stretch of sparsely populated farmland. There were fewer homes as you approached the bridge, even though it was no more than a twenty-minute walk from the center of town.

It was dark out that way at night.

A classmate lived in a large two-story house which was one of the last homes before reaching the bridge. Running past their home, off that main street, was a tree-lined lane which led to,a half-mile or so from the street, a cemetary.

The trees grew more dense as you walked deeper into the grounds, culminating in a woods, separated from the cemetary by a small ravine. There, under a canopy of thick trees, was a rectangular, stone slab, with weather-worn scripture quotes and no name.

At one end of the slab was a small stone lamb with no head.

The story our classmate had told us was that, a hundred years or more earlier, the property had been owned by a vicious racist. One day, as he was hunting in those woods, he spotted a young Native American girl on the far side of the ravine.

Then, like Roland did to Van Owen in Warren Zevon’s Roland The Headless Thompson Gunner, the racist land owner raised his gun and blew off the Native American girl’s head. I remember our classmate saying, “Her head popped off and rolled into the ravine.”

It was the Native American girl supposedly buried beneath that slab.

It would make the tale more eerie I suppose if I could tell you that townsfolk had claimed to have seen a headless spirit or heard mournful wails from those woods. But, as far as I know, there no such stories.

There was little reason to go back there. There were a number of places for the high school kids to escape from supervision, so that cemetary wasn’t even a gathering place where minors might smoke or drink.

I might have to trek back there the next time I visit.

Curve caught my attention when Doppelganger arrived in our record store at the time and a few of us played the hell out of it. The British duo’s music was dense and cacophonous, but there was also melody underpinning the towering layers of guitars and swirling electronics and Toni Halliday’s vocals were provocative and sensual.

from A Kind Of Magic

My friends and I remained devoted to Queen throughout high school, even though their popularity in the States cratered following the massively successful The Game and that album was released while we were still in junior high school. A Kind Of Magic hit stores just weeks after we graduated and we were stoked to check it out as it featured a number of songs from the movie Highlander which we had seen months before.

For the most part, I was disappointed in the album, but the dance rock workout Don’t Lose Your Head was one track I did dig. And, the song features a cameo by singer/songwriter Joan Armatrading that’s always struck me as anu unusual union.

from Rage Against The Machine

I didn’t immediately gravitate to Rage Against The Machine. I thought their politics to be somewhat half-baked. However, seeing them live, opening for U2 – a band against whom the same accusation could be made regarding politics – made me a fan of the sheer sonic force of Rage’s music.

I didn’t truly fall for Concrete Blonde until their third album Bloodletting, but I quickly went back and grabbed their two previous albums. Both Bloodletting and the trio’s eponymous debut were staples in college and the band was also much beloved on alternative radio.

Though Concrete Blonde was quite adept at producing quasi-gothic tracks with crooned vocals, there were also songs in their catalog like Your Haunted Head that brought the grit and the snarl with equal aplomb and harkened to the band’s punk roots.

*reposted – with some alterations – from Halloween ’09

_uacct = “UA-3941004-1”;
urchinTracker();
The one thing that can make the most skeptical person become a strict adherent to superstition has to be being a sports fan. It doesn’t matter the sport, team, or athlete, if you have an allegiance it will drive you to ritualistic behavior with a certainty that to not do so will undoubtedly wreak havoc on your icon’s fortunes.

So, when I settled in to watch Pittsburgh play Cleveland the other night, there was a Terrible Towel draped atop the television. As the Steelers held a slight lead in a swirling rain, led by a quarterback playing with what announcers referred to as a “separated shoulder,” I was noting songs that were played as the game went into and out of commercials.

The Pretender’s My City Was Gone? Well, they were in Cleveland and Chrissie Hynde was from nearby Akron.

How did these songs connect and what did it bode for my team? All were songs by bands which Paloma loved. The tea leaves told me it bode well.

Along with my diligent search for signs, I engaged in behavior understood by all sports fans – doing (or not doing) certain things based on the results of each play. If you swallow a mouthful of water and your team runs a play that gets a first down, the next play requires another swallow to ensure success – things like that. It really is quite exhausting.

And, thanks to my heroic efforts – the Steelers defeated the Browns.

Of course, the theme to the Sunday night game (what’s the overly dramatic name they’ve christened it? Football Night In America?), is Joan Jett’s I Hate Myself For Loving You (with new lyrics pertaining to the event at hand) as performed by Faith Hill. I’m not taken with this update and, perhaps because of the song’s adaptation, I’ve soured on Jett’s original.

But, you do have to have love for Joan. Personally, my affection for Joan is tempered this week knowing that she is from Philadelphia (and, thus, possibly an Eagles fan) and the Steelers play at Philadelphia this Sunday.

Joan Jett & The Blackhearts – Light Of Day
Written for the movie of the same name by Bruce Springsteen. I only caught bits of the flick when it was on cable in college, but the concept of Joan Jett and Michael J. Fox as bandmates is confusing to me. I’ve read Fox’ autobiography (which is quite a worthwhile read) and he could have probably hung with Joan in his youth, but Marty McFly and Joan Jett…man, she’d have sent him back to Doc Brown in a body bag.

Joan Jett & The Blackhearts – I Love Rock ‘N Roll
The song that made everyone alive and conscious in 1982 aware of Ms. Jett. It was always on the radio during the late winter/early spring of that year. The damned thing still triggers a Pavlovian response from me every time I hear it – it must be spring. It’s that deeply ingrained in my psyche.

Joan Jett & The Blackhearts – Everyday People
Growing up in a small town in the Midwest, the ethnic make-up of our sleepy, little hamlet would have never led us to being mistaken for a Benetton ad. And, as I didn’t listen to much R&B on the radio, I likely had no idea who Sly Stone was when this version introduced me to one of his classics.

Joan Jett & The Blackhearts – Cherry Bomb
Isn’t Cherry Bomb about as gloriously elemental as a rock song can be? Proof that oftentimes there is no need to reinvent the wheel.