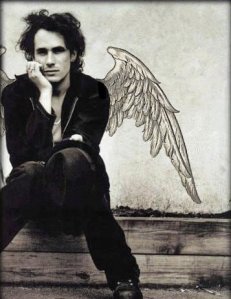 For several years, the position of main buyer at a large record store in a major music city afforded me opportunities that would make most music fans delirious. I took advantage, but, at times, it was overwhelming.

So, when a friend who worked for a label called me on a rainy Sunday night, I had no intent of trekking out into the gloom. However, as this friend was not prone to hyperbole and he made his case that this show was a must, I reconsidered.

Fortunately, my then-girlfriend’s apartment was two blocks from the club. It was eight o’clock. I think that I told her that I’d be back by nine.

The club was small, housed in a building in which one half was a candlelit café with a decidedly bohemian slant. The club occupied the other half. It was filled to maybe half capacity – no more than a hundred people.

I found my friend at a table with several other of our usual group, likely ordered a glass of red, and watched as a slight kid with a mop of unkempt black hair took the small stage. A large statue of an angel – a noted feature of this club – hung behind the band, high above, seeming to levitate against the dark, theatre-style draperies.

The artist was Jeff Buckley.

Jeff was the son of folk singer Tim Buckley, who had died of an overdose in the mid-‘70s. It was March of ’94 and Jeff’s debut album, Grace, wouldn’t arrive in stores until late summer.

Buckley’s voice was one of the most compelling I’d ever heard. It was primal. It soared and swooped like some beautiful, yet fragile, bird of prey.

When he sang Leonard Cohen’s Hallelujah, the clinking of glasses, the idle conversations all stopped.

Afterwards, he hung out with us for a bit. The details are hazy (I was drinking on my label friend’s expense account), but I remember him having a gentleness about him. He seemed down-to-earth, quiet, and to have a vibe of restless calm about him.

I didn’t make it back to my girlfriend’s apartment until well after two.

Six months later, Grace was released to critical raves and (everyone say it together) public indifference.

But the album didn’t merely fade away. The acclaim was so strong and listeners who had found it had the need to reach converts. Though it didn’t become a mammoth commercial smash, Grace sold well and did so steadily for the next year or so.

During the late winter of ’97, Buckley had relocated from Manhattan to Memphis to work on his second album. He had already recorded an album’s worth of songs but was dissatisfied with them.

On May 29, the day his band had arrived in town to continue work on the record; Buckley waded out into a channel of the Mississippi River, taking a late night swim. According to a roadie, who was onshore, he was singing the chorus to Led Zeppelin’s Whole Lotta Love.

That night, I was with the same label friend, out with most of the same friends from that show, having drinks, when he received a phone call that Buckley was missing. Word of the incident seemed to spread quickly.

Our group ended up at the house where I lived. We sat around watching a compilation of live and video footage my friend had, as mesmerized as we had been three years earlier. It was an unexpected, impromptu wake.

Buckley’s body was found six days later and – as he was sober at the time – his death was ruled an accidental drowning.

Jeff Buckley – Lover, You Should Have Come Over
from Grace