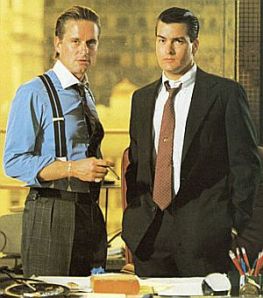 In the late ’70s, there was a documentary called Scared Straight in which young delinquents/aspiring felons visited hardcore criminals doing time in Rahway State Prison. The theory was that being exposed to the harsh realities of prison life might alter the kids’ behavior.

The film caused a stir, won some awards, and used to pop up on PBS, which is where I think I saw a portion of it one night when there was nothing on the other four or five channels available.

Channel-surfing the other night, I stumbled across another movie that more profoundly altered the course of my life through its harrowing subject matter.

In December of 1987, I was mid-way through my sophmore year of college and I had snagged a coveted gig at a record store as Christmas help. I wouldn’t become jaded on working the holidays in retail until the following Christmas, so the only downside was being stuck in a town where half the population was students.

Aside from most of my friends heading home as soon as finishing their last final of the semester, I was still living in a dorm which would be closed.

Fortunately, my girlfriend’s brother, a cousin, and several other of their friends had a house off campus where I could crash for a week or so before I got to head home for Christmas break. I spent two nights trying to sleep on the brother’s unheated water bed before relocating to the couch downstairs.

Most days I worked and, most days, it was a closing shift. I’d trudge home in the snow and encamp on the couch, flicking through the cable channels ’til all hours. Two of the housemates were also hanging out until days before Christmas. One was there because he worked at a pizza place which meant we had food.

One afternoon, all three of us happened to be home and decided to head out to a movie.

Those two were a couple years older and would both earn business degrees the following summer. I was intending to enter business school with no intention of entering the business world.

We settled into the seats at the multiplex to catch a weekday matinee of Wall Street which had just been released, arriving less than two months after Black Monday had rocked the stock market.

I suspect it wasn’t director Oliver Stone’s intention, but the housemates didn’t view the character of Gordon Gekko as a villain. As portrayed by Michael Douglas, Gekko’s sophistication and swagger played well with them.

I wanted nothing to do with the stressed out beings scampering about the screen.

I felt no need to own a jet.

Instead, the idea of working in a record store as a career seemed much more zen and to my liking.

I finished school and during those years studying business, it was obvious the influence that Wall Street had had. Gordon Gecko was the patron saint of most of my classmates.

When I graduated, I received the expected queries as to what I intended to do. I gave everyone the same answer.

I didn’t become a shepherd, but I did spend several years post-college working in record stores. Heeding the warning of Wall Street, I avoided the corporate world for longer than most and, when I did become enmeshed in it, I found myself surrounded by the children of Gekko (sans the style and savoir faire).

But, during that Christmas break of ’87, that was all in the future. In that present, there was mostly music. Here are four songs that I remember from that time…

I’ve always considered the Eurythmics – despite their success – to be one of the underappreciated acts of the ’80s. The masses all aquiver over Lady Ga Ga should be forced to watch the videos of Annie Lennox to observe a performer that was truly groundbreaking.

By the time Savage arrived, the duo’s career was on the decline in the States, but I loved it just the same. The first time we played the album in the store where I worked – after Annie had tore through the aggressive I Need A Man – one of my friends seemed truly frightened.

“You do not want to mess with that chick,” he sagely noted.

from It’s Better To Travel

Top 40 was mostly off my radar by ’87, but one gem from that autumn was the irresistible Breakout by the British trio Swing Out Sister. The sophisticated pop song was breezy, sunny and the perfect anitidote to the chill in the air as winter approached.

(and singer Corinne Drewery, with her jet-black pixie haircut, was rather fetching, too)

My buddy Streuss was enamored with The Screaming Blue Messiahs at the time and, whenever I was hanging in his dorm room, it seemed that he was playing Bikini Red.

As a long-time fan of The ‘stones, I immediately dug the manic, rockabilly-tinged I Wanna Be A Flintstone. It was a sentiment with which I wholeheartedly could relate.

The lovely I Don’t Mind At All is a timeless pop song. Produced by the legendary Todd Rundgren, the melancholic ballad was every bit as engaging as Swing Out Sister’s Breakout that winter, but, unlike that song, suited the season perfectly.

Rundgren had produced the XTC classic Skylarking a year earlier and I Don’t Mind At All would have fit that album seamlessly.