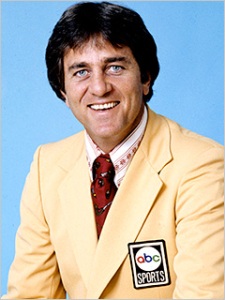 From the time I was ten until I had turned sixteen, one of the highlights of Monday Night Football was – at some point late in the game with the outcome no longer in doubt – hearing commentator Don Meredith croon, “Turn out the lights, the party’s over.”

So, I was a bit bummed to hear of his death this past week.

I missed the first four seasons during which Meredith was one of the original Monday Night Football announcers. When he returned to the booth in 1977, I was becoming a devoted football fan and – finally – old enough to stay up to watch each week with greater frequency.

It was a world with a mere three television networks and no such thing as ESPN.

Monday Night Football was an event.

In junior high, Monday morning was spent discussing the previous day’s games, but, by afternoon, the conversation between (and sometimes during) classes was often about that evening’s Monday Night Football match-up.

Thus, on Tuesday, the banter amongst me and my friends was regarding Monday night’s events.

And, more weeks than not, the antics of Howard Cosell and Don Meredith would prove to be as compelling to us as the game.

We had been too young to see Meredith quarterback the Dallas Cowboys of the ’60s, but we delighted in the affable Texan and his folksy needling of Cosell. He was a constant presence in our lives during those early years of the ’80s be it announcing the games or selling Lipton tea.

Oh, as a fan of the game, I eventually learned more about Meredith’s place in its history which included him under center for the Cowboys when they lost the fabled Ice Bowl – and a trip to the Super Bowl – to the Green Bay Packers in ’67.

Then, following the 1984 season, Meredith was gone, leaving Monday Night Football and retiring to New Mexico.

“Meredith was the guy who sang in huddles, read Hemingway, shot mid-70s in golf and strummed and sipped with Willie Nelson,” wrote Brad Townsend from the Dallas Morning News in a fantastic piece on the man in retirement.

Another sportswriter noted that, though a lot of football fans might have hated the Dallas Cowboys, he knew of no one that wasn’t a fan of Don Meredith.

The late, great Kirsty MacColl never was able to attain more than a fringe following in the States and her best-known song here would be Tracey Ullman’s cover of MacColl’s They Don’t Know which the comedienne took into the Top Ten in 1984.

It’s unfortunate that MacColl isn’t better known as she not only possessed a lovely voice, but her material was quirky, ecclectic, and usually catchy as anything out there. The lilting Don’t Come The Cowboy With Me Sonny Jim added a bit of south of the border twang as MacColl lays down the law with an uncommitted paramour.

from The Essential Willie Nelson

There needs to be a Willie Nelson fantasy resort. Who wouldn’t pay good money to spend a week living like Willie?

Get up early, shower, dress semi-presentably, endure a death-defying commute, and spend nine hours being a drone or get up considerably later, put the hair in pigtails, let someone else pilot the biofuel bus, and inhale.

Not a difficult choice there.

from I Wanna Be A Cowboy

My friends and I were greatly amused when we first heard I Wanna Be A Cowboy during the winter of our senior year of high school. It popped up now and then on the rock station we’d be listening to as we hung out on weekend nights, searching for something to do.

Then, the song was everywhere and it grew a bit tiresome.

However, listening to it again after rarely hearing it over the past twenty-five years, it’s easy to understand how we were charmed by the quirky techno-pop track that touted the joys of riding the range on a horse named Trigger (of course).

from Cowboys And Aliens

The British trio Kitchens Of Distinction released a quartet of albums filled with dense, swirling walls of guitar often drenched in reverb before splitting after their swan song Cowboys And Aliens in 1995.

Paloma and I spent plenty of hours listening to both the band’s The Death Of Cool and Cowboys And Aliens. The title track of the latter expressing a longing for extraterrestrials to whisk the less accepted of this world to a more caring place.