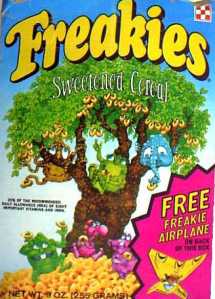 Though Paloma will likely roll her eyes, I’m not one to be swayed by commercials.

Sure, there are things that are of use to me that I’ve learned about via an advertisement – the garden weasel or Hardee’s mushroom and swiss thickburger – but I’m not going to merely goose-step to the store because of a celebrity or a snappy jingle.

As a kid, though, it was far easier to be drawn to the siren song of commercials, especially the ones sprinkled throughout a morning of viewing cartoons on Saturday mornings.

The main obstacle to acquiring the necessities proffered before me during Land Of The Lost was a lack of funding and parental cooperation.

Our parents didn’t allow us to drink Coke with breakfast or have a plate of cookies for dinner – and for that, I thank them – but there was sometimes room to negotiate for food items with little nutritional value.

One of the first I times they acquiesced was with Freakies, which captivated me with their animated commercials featuring a bunch of bizarre little creatures.

The cereal was nothing more than little golden hoops of sugar and corn with a taste similar to Cap’n Crunch without the ability to strip all of the skin from the roof of your mouth.

In fact, they went from crisp to soggy in what seemed like seconds.

Freakies went off the market in 1976. I wasn’t listening to music aside from what I might hear on the radio in the car. There’s a lot of songs from this week – that year – that I somewhat remember hearing then; a lot more which I met later on. Here’s one of the latter…

A couple years later, one of our teachers brought candy her husband had gotten on a trip to California. She doled out a small pile of pinkish-colored pebbles into our hands and, on her command, had us pop them into our mouths.

It was Pop Rocks.

Pop Rocks became a genuine phenomenon. I doubt there was a fifth grader in the US at the time that wasn’t aware of the rumor that “Mikey,” from the Life cereal commercials, had died from a burst stomach as a result of ingesting Coke and Pop Rocks.

I still wasn’t listening to much music in 1978 when I first experienced Pop Rocks, but I do especially remember hearing one particular song that was on the charts this week…

Two years later, the kids were all abuzz over a recently introduced soft drink – Mello Yello.

Maybe it was because I didn’t drink a lot of colas then (or now, for that matter), but I was non-plussed with the citrus-flavored drink that billed itself as “the world’s fastest soft drink.”

In 1980, I had just finished my first year of junior high school and was beginning to find myself drawn to the radio. I was familiar with most of the popular songs during this week, including this one…

from All The Best

There was one food fad that didn’t happen and I feel partially responsible – McPizza.

In 1985, I was slaving in a hot kitchen at my first real job, manning the grill at McDonald’s. Our store was chosen as a test market for McPizza, a wonderful newfangled food item that was a giant pizza roll, deep-fried with love.

It was a Hot Pocket fifteen years before Hot Pockets arrived in stores.

Unfortunately, one of my friends and I were immediately smitten with the McPizza. Over the next two weeks, the two of us spent our shifts continually frying them up and eating them. I think we went through all the three or four cases we were alotted with few, if any, actually registered as sales to the public.

By then, we had ended our junior year of high school and music was one of the few things that I could be bothered to care about. It was the summer of Live Aid and, on the advice of a friend that had seen the video for Rain on MTV, I snagged a copy of the final album by The Boomtown Rats…

from In The Long Grass