The Men Were The Men Back Then 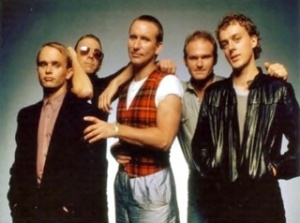 Amidst the news last week of the deaths of Dick Clark and The Band’s Levon Helm was that of Greg Ham’s passing.

As I was a high school kid in the early ’80s, the name was immediately recognizable as the saxophonist for the Australian band Men At Work.

Men At Work arrived on American shores at a time when I had just developed enough interest in music to be listening to a lot of radio, but I hadn’t ventured much beyond mostly Top 40 stations. Most Saturday mornings, I’d tune for at least a portion of American Top 40.

The first time I ever heard – or even heard of – Men At Work was when Casey Kasem announced their song Who Can it Be Now? debuting on the countdown. It was August, 1982, and I had just entered high school.

By the end of that weekend, I seemed to be hearing the song hourly on one or more station as I surfed the band.

Men At Work was the first band that truly blew up on my watch. Who Can It Be Now? was quirky, New Wave rock full of irresistible hooks and punctuated by Ham’s honking saxophone bursts.

I remember reading an article on the band over that break and quotes from the members that they were already tired of Business At Usual. The album had been released in their homeland in 1981 and the band had its follow-up ready for release.

(Columbia, who had signed the band after Business In Usual took Australia by storm, rejected the album twice before belatedly issuing it here – well played Columbia)

That follow-up, Cargo, arrived quickly on the heels of the debut in the spring of ’83. I recall a neighbor being the first of my friends to get a copy and how eager we were to hear it.

Cargo was a success, but not on the scale of Business As Usual, which would have been unrealistic to expect.

That autumn, Dr. Heckyl & Mr. Jive became the third single from Cargo to reach the Top 40 and the first hit by the band to not reach the Top Ten.

Just over a year after Men At Work had burst onto the scene, it was over.

Men At Work would issue one, final album in 1985, but during the lengthy break, the band was reduced to a trio of lead singer Colin Hay, Ham, and guitarist Ron Strykert.

Two Hearts came out as we began summer break before our senior year of high school, but it was greeted with indifference and Men At Work broke up with little fanfare.

Here are four songs from Men At Work…

As catchy as Who Can It Be Now? is, the song’s accompanying video certainly hastened Men At Work’s breakthrough in the US.

MTV was about eighteen months from availablity in our are, but I caught the clip somehow and was amused and captivated by lead singer Colin Hay’s portrayal of a paranoid recluse and his lazy-eyed glances into the camera.

Hailing from Australia made Men At Work an exotic import to us and Down Under played on that aspect with its playful, eccentric take on the band’s homeland.

(as well as teaching us about vegemite)

Though the two hits were the most memorable songs on the album, Business As Usual could have had another hit single or two had the band not had Cargo waiting in the wings.

Be Good Johnny got a lot of airplay, but the delightful People Just Love To Play With Words would have made an ideal choice as a third single.

Cargo, like many a blockbuster follow-up, wasn’t quite as good as its predecessor, but it did contain Men At Work’s finest moment.

Overkill was as quirky and engaging as the previous hits, but it was also wistful. The song always made me think of rainy, empty streets illuminated by streetlights in the early morning hours as most of the world is asleep.

(perhaps because I so often heard the song on the radio that spring, as my friends and I – having finally gotten our driver’s licenses – would be out late, killing time)