I’ll Give You Something To Cry About 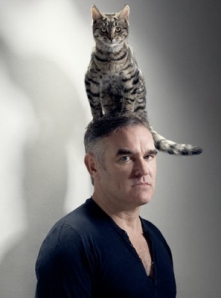 Occasionally, I will be surprised to find Ravi, our smallest cat, hanging from the top of the curtains in our living room.

I find these moments to be hysterically entertaining. It’s like being in a cartoon.

Paloma is less amused. In fact, for reasons inexplicable to me, she is not amused.

Ravi’s hanging antics – and whether or not they should be celebrated, perhaps even encouraged – is one of the few major points of contention between Paloma and I.

The other is her declaration that Morrissey would take Bruce Springsteen in a fistfight.

I thought it was kooky talk.

Paloma will profess her affection for Springsteen, but she is a long-time devotee of The Smiths and has argued that, should fisticuffs ensue, Morrissey would fight dirty.

I first heard The Smiths, for whom Morrissey sang lead, on 97X in high school – it must have been their clasic How Soon Is Now? – and the band was hugely popular with a lot of my friends and peers in college.

I just was hardly rabid about The Smiths, though, and The Smiths fans that I knew often were.

(as a lot of Springsteen fans are rather obsessive about Bruce)

I liked The Smiths, but I never totally embraced the band. However clever and literate the lyrics, despite the wonderful, jangly guitar, the mopiness of it all wore out its welcome with me.

“What’s he bitching about now?” I’d ask a college buddy when he’d put on The Smiths and Morrissey would lament how he never got what he wanted.

I thought of Paloma’s pugilistic prognostications regarding Morrissey and Springsteen the other morning while commuting to work.

I often bounce between E Street Radio and the ’70s station on Sirius and had the latter dialed up as Gilbert O’Sullivan was singing Alone Again (Naturally). I couldn’t help but hear the morose lyric and imagine Morrissey covering the song.

Given the sensitive inclinations of many of the singer/songwriters of the decade, several other hits of the ’70s popped into my head.

I believe that Ravi should be allowed to dangle without restrictions and I have no doubt that Bruce would indeed triumph should he and Morrissey enter Thunderdome.

And, here are four songs from the ’70s that I think might be ideal for Morrissey to cover…

God only knows how I interpreted this song as a child. I imagine that I was too entranced by the nursery rhyme-like melody to ponder Gilbert’s existential angst.

I wasn’t listening to music in 1975 aside from what I’d hear on the radio in the car, but I do remember hearing Wildfire. How could I not?

Before the first chorus, a young girl is dead and “the pony she called Wildfire” is lost in a blizzard.

To paraphrase Spinal Tap’s Nigel Tufnel, how much more blue could Michael Johnson be?

The answer is none. None more blue.

And then there is ex-Sha Na Na member Henry Gross and his elegy about the death of Beach Boy Carl Wilson’s Irish setter Shannon.

So, to recap, we have four songs with a jilted, suicidal groom, a pair of dead parents, a dead girl, a pony lost in a blizzard, a disheartening break-up, and a dead dog that drove Casey Kasem to distraction.

This entry was posted on Saturday, September 22nd, 2012 at 8:46 am and is filed under '70s, Gilbert O'Sullivan, Henry Gross, Michael Johnson, one-hit wonder. You can follow any responses to this entry through the RSS 2.0 feed. You can leave a response, or trackback from your own site.

2 Responses to I’ll Give You Something To Cry About