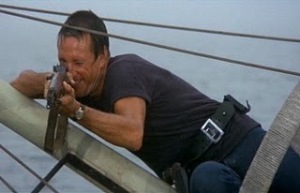 Though I didn’t see the original Jaws in the theater, I did catch the sequel when it came out during the summer of 1978.

Five years later, though, I opted out of Jaws 3 – no Roy Scheider, no dice – and I somehow avoided seeing it until 1989. I watched it sitting at a small bar, poolside, on an island off the coast of Thailand.

I sat there and watched it as I wrote a letter.

It wasn’t dreadful, rather, it was just there, taking up space on the television.

Taking up space here is what we started here – the third and final installment of our running diary of a recent viewing of the original Jaws.

Brody, Hooper and Quint have hit the high seas and they’ve come across the shark for the first time.

Brody had just made his famous take on their situation…

1:28:05 Quint and Hooper drink to each other’s seafaring (and non-seafaring) injuries. All Brody has to hang his hat on is an appendectomy scar, so he doesn’t get to drink. Of course, as he has been drinking for the entire movie, his blood-alcohol level is still higher than that of John Bonham at the drummer’s death.

1:29:12 Quint tells his tale of the USS Indianapolis. Though Robert Shaw was an acclaimed actor and accomplished writer, I don’t necessarily recall seeing him in any other role than Quint. At this point, having seen Jaws so many times, he is Quint to me.

Although I am capable of reciting it almost at will, Quint’s tale of the USS Indianapolis’ sinking hooks me the moment he recounts how a “Japanese submarine slammed two torpedoes into her side” and I remain riveted until he concludes – “Anyway, we delivered the bomb.”

Shaw’s performance in this scene is simply riveting and the man supposedly knocked it out in one take.

1:38:26 Quint has officially gone Ahab, battering the radio to bits as Brody tries to call for help.

1:43:32 Quint is giddy as a schoolgirl at the idea of having the shark stuffed and mounted for his den.

1:52:16 Hooper descends in the shark cage – something I would have been unwilling to do for all the lithium in Afghanistan.

1:55:06 Hooper magically transforms himself into a “little person” as the shark destroys the cage.

And speaking of little people, why does The Learning Channel have so many reality shows featuring little people? Little People, Big World…The Little Couple…Our Little Life…

The unemployment rate in the US is better than nine percent, but thanks to the efforts of the imaginative minds at TLC, it’s less than two percent for little people and falling.

1:57:16 And Quint is going…going…gone. For years, the scene of Quint’s demise was brief, but, eventually, on one of the anniversary versions of the DVD, there was additional footage. I remember the first time I saw it and how surprised I was at the carnage – a good thirty seconds of Quint thrashing about in the mouth of the shark.

1:58:05 And now there’s just Brody, fending off the shark as the Orca goes down. I imagine that the crime in New York City – which he lamented upon meeting Hooper – probably looks good about now.

2:01:12 Hooper resurfaces, normal-sized and he and Brody share a laugh before beginning the swim back to shore.

One thing that has always made me wonder…you’ve just blown up a massive shark, spewing thousands of pounds of shark meat, blood, and other miscellaneous viscera into the ocean. Isn’t this going to attract every predator within several nautical miles?

Well, that’s a wrap and I now can move on to examining the unexamined minutea that has piled up in my head over the past week.

I wasn’t listening to much music at the time, but had I been listening thirty-five years ago – when Jaws had just arrived in theaters – here are four songs that were on the charts during this week in 1975…

There were two acts that I can think of who, in 1975, were such radio juggernauts that even a seven-year old such as myself was well acquainted. One was The Carpenters; the other was Elton John.

If I were to rank my favorite Elton John singles, I suspect that the lovely Someone Saved My Life Tonight would be in the top ten – everything about the song works for me (even if it does remind of a half-witted co-worker I once had who insisted that the name of the song was Sugar Bear).

I do remember Glen Campbell as a kid, not so much for his music but because he always seemed to be a guest on whatever afternoon talk show – Dinah Shore, Mike Douglas – that my mom would be watching.

And, I do remember Rhinestone Cowboy during its time on the charts as my brother had the 45 and played it constantly.

Maybe ten years ago, I was sitting in a bar, having a few drinks with friends when a melody caught my ear over the din of the crowd. It was a dance mix of Rhinestone Cowboy and – and I’m not usually a fan of such mixes – but it worked spectacularly.

I’ve never been an Aerosmith devotee. Possibly because their ’70s heydey was over by the time I was getting into music and their late ’80s comeback came as I had discovered college rock.

That said, there is a clutch of their songs which I do think are rather stellar, Sweet Emotion being one of them.

I had no frame of reference for the plight of the protagonist in At Seventeen in 1975.

(again, I was seven)

But, I did understand that things weren’t going well for her.

As for Janis Ian, I used to see her on occasion at a coffee shop where I’d stop and, though I never spoke to her, it appeared that things were much better for her than they had been at seventeen.

This entry was posted on Sunday, July 22nd, 2012 at 6:12 am and is filed under '70s movies, 1975, Aerosmith, anniversary, Elton John, films, Glen Campbell, Janis Ian, Jaws (film), pointless rambling. You can follow any responses to this entry through the RSS 2.0 feed. You can leave a response, or trackback from your own site.