The Voodoo Economics Of Morgan Freeman And A Bunch Of Fish 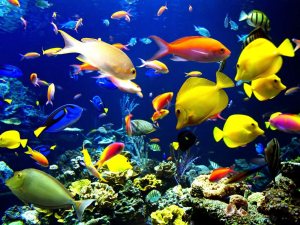 My concerns are more than some sensationalistic ballyhoo.

They are more than some flimsy, baseless caterwauling from someone possessed by the spirit of a carnival barker, newsstand tabloid, or Republican pundit.

No, I fear that, sadly, there is considerable truth behind it.

Like many people, I have been a fan of the award-winning thespian, but I now realize that I might have been lulled into a false sense of admiration.

I used to look at him as a kindly fellow – compassionate and wise. I mean, if he wasn’t offering rides to cantankerous, elderly women, you might find him engaging in the much-needed rehabilitation of falsely convicted criminals or lending logistical support to masked vigilantes wishing to rid our cities of such criminals.

(of course, lily-livered, bleeding-heart types would rather that we not rid our streets of falsely convicted wife-killing bankers and, instead, target bankers who merely engage in casual games of multi-billion dollar three-card Monte)

The existential threat posed by Morgan Freeman to America’s economy didn’t really register until this morning when I saw a commercial for Visa before I’d ingested enough caffeine to think straight.

In this commercial, serene images of undersea flora and fauna fill the screen accompanied by the soothing strains of The Moody Blues’ Tuesday Afternoon.

Then, the earnest voice of “the only guilty man in Shawshank,” asked, in a somewhat accusatory tone, “When was the last time you went to the aquarium, with your daughter, on a Tuesday?”

Sure, an aquarium crawl sounds like a lovely way to spend the day after Monday. One of the finest aquariums in the country is a two-hour drive away and, though I have no daughter, the way some of my co-workers squeeze out offspring of both sexes as though it was a bodily function, I could likely borrow one…

But that is exactly what Morgan Freeman wants me to do. In other words, he is promoting not only truancy, but he is espousing a fiscal policy that encourages absenteeism from work.

This would all be well and good for aquarium barons, fishmongers, and oceanographers who would likely see profits that would make those of Exxon be mere pocket change, but at what cost?

The rest of the economy would fall into a death spiral. If people were relaxing at aquariums instead of engaging in the daily grind of commerce, consider the revenue lost simply by those treating bleeding ulcers, intense malaise, and depression.

And think of the children…

Instead of learning how to take tests at a level that places them smack dab at mediocre compared to the rest of the world, these kids might end up as ichthyologists or marine biologists.

Fortunately, today is Sunday and I suggest we all give Morgan Freeman (and his dubious, probably Socialist economic theories) the finger and head to the nearest aquarium today.

from The Platinum Collection (1994)

From the beginning of my real interest in music in the late ’70s/early ’80s, Blondie has been a favorite. The fetching allure of lead singer Debbie Harry and the percolating Heart Of Glass provided the first hooks, but it was soon the musical diversity of the group that charmed me.

On Sunday Girl, which according to Wikipedia topped the charts in the UK where Blondie has received more consistent love over the decades, the chameleonic quintet recreates a ’60s girl group vibe that drew me in the first time I heard it.

Speaking of musical chameleons, I’d certainly classify Joe Jackson as such. Though best known in the States for the sophisticated pop of the hits Steppin’ Out and Breaking Us In Two from his breakthrough album Night And Day, Jackson has jumped between styles including rock, big band, swing, and classical.

On Sunday Papers, Jackson opts for staccato, reggae-inflected tones as the musician takes to task both the media and those who drive the demand for meaningless fluff pawned off as newsworthy information.

from Lost Dogs And Mixed Blessings (1995)

Not long ago, I recounted the good fortune of having had a preview listen of folk singer John Prine’s Lost Dogs And Mixed Blessings with a small group of people that included the artist.

The loping He Forgot That It Was Sunday would seem to be a cautionary tale punctauted by Prine’s offbeat take on things which includes a chartreuse, foor-door Lincoln, Charlie Parker’s teddy bear, and a masterbatory Beelzebub.

Paloma and I tend to be fairly sympatico, but I have never been as enamored by The Smiths as she is.

(appreciative, yes, but far from devoted)

This difference of opinion was seemingly benign until the day she declared The Smiths to be a more formidable musical entity than Bruce Springsteen & The E Street Band.

(I quickly branded this claim as kooky talk)

However, we both seem to like The Pretenders in equal measure, so here is Chrissie Hynde and company’s rather faithful take on a Smith’s classic from Boys On The Side, a flick that may or may not have been about cannibalistic lesbians.

This entry was posted on Sunday, March 11th, 2012 at 10:28 am and is filed under Blondie, cover songs, Joe Jackson, John Prine, pointless rambling, random musings, Sunday, television commercial, The Pretenders. You can follow any responses to this entry through the RSS 2.0 feed. You can leave a response, or trackback from your own site.