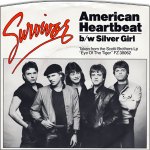 As the contents of my head need to settle back into place, I’m pulling up a Billboard magazine Hot 100 chart from the early ’80s – a period of my initial infatuation with music and radio – and checking out the debut songs for that week.

So, here are the eight songs making their first appearance on the chart during this week in 1982…

For a man known to some as the “Fifth Beatle,” I know surprisingly little about Billy Preston.

I knew that Preston performed on the Apple rooftop with the band, had some legal and health issues, and passed away several years back. As far as his music, all I know is Nothing from Nothing and With You I’m Born Again – the ballad sung with Stevie Wonder’s then-wife Syreeta.

I’d never heard I’m Never Gonna Say Goodbye, but it sounds like a song that James Ingram might have done a few years later if you added a twist of stalker and a bit more melodrama.

Singer/songwriter Karla Bonoff had a hit during the summer of ’82 with Personally. I didn’t really like the song at the time – and it got a lot of airplay – but now I find the catchy song’s bounce and playful vibe appealing.

Bonoff sang back-up for Linda Ronstadt and Please Be The One has a slow, sultry vibe that is reminiscent of Ronstadt to me. I didn’t remember the song until it reached the chorus and rarely heard it on the radio in ’82.

I would come across Jeffrey Osborne’s On The Wings Of Love often during the autumn and winter that year when I got to the lighter rock stations on the dial. I’d stop long enough to identify it, but would only sit through it when it appeared on American Top 40.

I liked the light-funk feel of Osborne’s I Really Don’t Need No Light, and, though, On The Wings Of Love is pleasant enough, it just doesn’t appeal to me.

The Go-Go’s were seemingly everywhere overnight in 1982. Their debut Beauty And The Beat had topped the album chart in the US with two massive singles – Our Lips Are Sealed and We Got The Beat – becoming instant classics.

Vacation was released toward the end of the summer with Beauty And The Beat still on the album charts. Vacation was an immediate success and the infectious title song was a hit, but both seemed to fade quicker than that summer.

The band seemed to vanish overnight – gone as quickly as they’d arrived – and I didn’t hear a new song by The Go-Go’s on the radio until Head Over Heels two years later.

(an eternity in that era)

Get Up And Go has a nifty opening that echoes Bow Wow Wow and, like most Go-Go’s songs, it is fun, but it isn’t in the same class as the earlier trio of hits by the band.

Survivor had had the song of the summer of ’82 with their mammoth hit Eye Of The Tiger and American Haertbeat was culled as the follow-up to the band’s theme from Rocky III.

American Heartbeat was sleeker, built around pulsating keyboards, but still retained a rock edge and, though it certainly fit alongside stuff like Journey and Foreigner hits of the time, the song – not surprisingly – was unable to replicate the success of Eye Of The Tiger.

I dug the song, not that I think I heard it more than a few times on the radio at the time despite it reaching the Top Twenty.

Stevie Wonder had released the double-album retrospective Stevie Wonder’s Original Musiquarium I in the early months of 1982. During that spring and summer, two of the album’s new songs – the yearning That Girl and joyous Do I Do – had become sizeable hits as well as Wonder’s duet with Paul McCartney, Ebony And Ivory.

Ribbon In The Sky was tapped as Original Musiquarium‘s third and final single. Unlike the previous hits from the set, the song was a gentle, lovely ballad that might not have found similar radio acceptance but has endured as a favorite among fans.

If Survivor’s Eye Of The Tiger was the song of the summer in 1982, Chicago’s Hard To Say I’m Sorry was arguably the season’s biggest ballad and a commercial comeback for the venerable band.

But, as Survivor would learn, it’s difficult to follow up to such a radio juggernaut without the song getting lost in the wake of its predecessor. I heard Love Me Tomorrow plenty and still feel that the song is the best of the group’s ’80s ballads, but it failed to resonate with the public as Hard To Say I’m Sorry had.

When Billy Joel released The Nylon Curtain in autumn 1982, the singer was coming off a trio of albums – The Stranger, 52nd Street, and Glass Houses – that had sold nearly thirty million copies and made Joel a radio fixture.

The Nylon Curtain was edgier and darker, but received glowing reviews and praise for its mature subject matter. The manic, paranoid Pressure also reflected the burgeoning influence of synthesizers becoming prevelant at the time and, even though accompanied by a stylish video clip, the song and album would be a commercial lull before Joel returned with the massively successful An Innocent Man a year later.

This entry was posted on Saturday, September 24th, 2011 at 7:31 am and is filed under 1982, Billboard (magazine), Billy Joel, Billy Preston, Chicago, Jeffrey Osborne, Karla Bonoff, Stevie Wonder, Survivor, The Go-Go's. You can follow any responses to this entry through the RSS 2.0 feed. You can leave a response, or trackback from your own site.