Dumbing Down The Cosmos 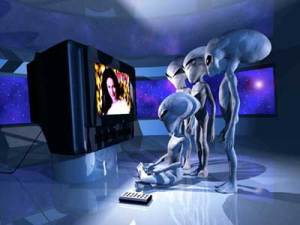 I happened across some television program on aliens the other night that was focused on theorists proffering the idea that human evolution has been influenced by extraterrestrial beings.

One fellow rattled off the Nazca Lines, the Pyramids of Giza and the Moai statues of Easter Island as evidence.

There was speculation that aliens might have altered the DNA of humans, resulting in some six billion or so lab rats.

The theory was also offered that some of their experientation with the various species on the planet explains the strange creatures depicted in ancient mythology – lions with wings and such.

And, these creatures might have, then, been taken by the aliens to populate other worlds.

I thought of our planet’s inhabitants as Sea Monkeys for extraterrestrials.

(it would be far less disappointing than brine shrimp)

Then, I considered Earth as a potential reality show for more advanced civilizations in the cosmos. Perhaps it competes for the attention of viewers with “reality” shows set in the other worlds the aliens have created.

Earth is probably quite popular in extraterrestrial trailer parks and a guilty pleasure for others.

(maybe it has a snappier title like So You Think You Can Evolve?)

from Hunting High And Low

Here in the States, the Norwegian trio A-Ha has been relegated to one-hit wonder status which is unfortunate.

Sure, everyone knows Take On Me, but I’ve always been partial to that song’s follow-up, The Sun Always Shines On T.V. It hurtles along with a gloriously yearning melody and, as I recall, the video was almost as striking as the song for which they’re better known.

from The Singles Collection

TVC 15 is a jaunty little number that originally appeared on Bowie’s Station To Station set. Apparently the song was inspired by a drug-fueled hallucination by Iggy Pop that a television set had swallowed his girlfriend. Iggy wished to crawl into the television and join her.

(Burger King commercials have the same effect on me)

from This Is Hardcore

I owned a trio of Pulp’s records from the mid-’90s when they reached their highest profile in their native UK. Here in the States, the group garnered little attention (which is too bad).

Jarvis Cocker always reminded me of a latter day Ray Davies. This is Hardcore was a darker, more somber affair than the band’s previous Different Class. TV Movie, lamenting a failed relationship, is somber, but it is also lovely and moving.

My high school buddy Bosco turned me on to both The Tubes and Todd Rundgren. Though Remote Control was released several years earlier, I have no doubt it was a memorable moment for him as the album found Rundgren producing the band.

Rundgren also received writing credits on a pair of songs from Remote Control, a concept album about television, including T.V. Is King. The amusing track has Rundgren’s fingerprints all over it.

This entry was posted on Saturday, February 26th, 2011 at 10:20 am and is filed under A-Ha, aliens, channel-surfing, David Bowie, extraterrestrials, pointless rambling, Pulp, random musings, television, The Tubes. You can follow any responses to this entry through the RSS 2.0 feed. You can leave a response, or trackback from your own site.

3 Responses to Dumbing Down The Cosmos