Are There Raisins In This? 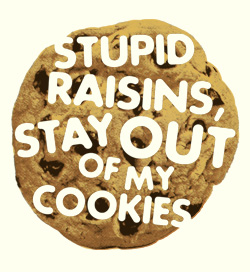 Due to my non-use of condiments, a friend used to disapprovingly refer to me eating “communist burgers.”

It’s true that I am often a minimalist with food.

It’s not that I haven’t been willing to take the palatte on a wild ride and toss something new down the gullet.

So, I know from experience that I do not like raisins.

In bowls of breakfast flakes, in toast, in cookies, in chocolate…they’re everywhere. I don’t think there’s been a food group whose inhabitants haven’t been used in an attempt to dupe me into eating raisins.

I have no palatable interest in the shriveled, desiccated carcasses of a once fine fruit and reject the raisin on not only principle but taste.

Yet they’re so ubiquitous I have to wonder if there is some sinister plot behind this reign of raisins.

(and who might be doing the plotting? – the government? the International Monetary Fund? aliens?)

And, at this time of the year, when baked goods are all the rage and Paloma is spending more time in the kitchen than Paula Deen, it is necessary for me to be more vigilant than usual.

I’ve drawn a line in the vineyard.

The first Christmas Eve on which I would have fallen asleep with the radio on would have been 1982. Here are four songs from the Billboard chart that week which I know I heard that Christmas night…

Is there a more enduring hit from the ’80s than Toto’s Africa? It seems to have seeped into the collective consciousness of most of the planet, including that of a Slovenian a cappella group.

from Business As Usual

Men At Work had dominated the radio during the late summer and early autumn of ’82 with Who Can It Be Now? By Christmas, Down Under had become the Aussie act’s second smash.

I do know that my friends and I had seen both of those videos on Casey Kasem’s America’s Top 10 and been delighted by lead singer Colin Hay’s expressive antics and emotive nature. And, I do know that I received a copy of Business As Usual for Christmas that year which I wore out over the following winter months.

One of my best friends in our neighborhood as a kid was a big fan of Bob Seger, so I was familiar with his music, but I wasn’t impressed. And, at the time, I wanted nothing to do with Shame On The Moon when it would come on the radio. It was far too rootsy for my tastes.

Then, somewhere along the way, I realized that I had a greater affection for the music of Seger than I had known. That included the loping and wistful Shame On The Moon, penned by Rodney Crowell.

I knew a handful of hits by Steely Dan when Donald Fagen, half of the creative force behind that partnership, issued his solo debut in autumn of 1982. Their music bored me as did I.G.Y. (which usually prompted me to change the station).

In retrospect, the stuff was simply too sophisticated for my young ears which were more attuned to Journey and Missing Persons. Over the ensuing years, I’d begin to catch up to the wickedly twisted works of Fagen and Becker.

Listening to the lush, shuffling track now and its vision of the future, I can’t help but think of folks who wonder where the flying cars we were told would dot the skies are.

This entry was posted on Friday, December 24th, 2010 at 7:55 am and is filed under '80s, 1982, Bob Seger & The Silver Bullet Band, Donald Fagen, pointless rambling, random musings, Toto. You can follow any responses to this entry through the RSS 2.0 feed. You can leave a response, or trackback from your own site.