Yes, Mr. Capra, You Are Correct* 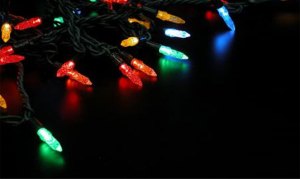 Tonight is being forecast to be one of the coldest of the season so far, but the central heat is keeping the chill of the outside world at bay and its steady hum is soothing.

The only light radiating – other than that from the television’s glow – is from several strands of white bulbs which Paloma has put up along with several other trinkets of the season.

On the television screen is Bedford Falls and It’s A Wonderful Life.

Unlike The Wizard Of Oz, which is aired several times each Thanksgiving, there’s one chance to see the Frank Capra classic each year and tonight is it.

I didn’t grow up with viewings of It’s A Wonderful Life, which is odd I suppose as I was a kid in the ’70s.

It was during that decade that the copyright on the film lapsed. Suddenly, the movie was being aired repeatedly during the holiday season on independent television stations and was rediscovered, becoming a beloved, Christmas staple.

Somehow, I never watched the movie.

I didn’t see It’s A Wonderful Life until I was in my early twenties and rented it from the video store next to the record store where I worked.

I had two days off, was broke, and wanted to veg. There was It’s A Wonderful Life. I shrugged and figured I was due.

It was the middle of July.

Now, an annual viewing, seasonally adjusted, is a bit of a tradition. So, I’m stretched out on the couch and watching as the plans of Jimmy Stewart get laid to waste one by one – no travel, no college, no life in the dirty city.

(and, as I think about it, I’ve been fortunate to do all of those things he’d set out to do)

Paloma was up very early this morning, so she’s not watching. She’d likely have passed anyhow as she finds the flick to be depressing.

It is a bit of a grim slog to Jimmy Stewart’s epiphany.

A lot of folks watching tonight likely identify with the struggles of the working class citizens of Bedford Falls.

There is a dreary rain falling outside and gusts of wind. I can feel by touching the window that the temperature is dropping.

My eyes kept catching snatches of items about the living room in the firefly flickers from the black and white images on the screen.

Bob Marley is smiling from some odd print that has him juxtaposed against stars and stripes. Godzilla battles the Smog Monster on a framed Japanese poster – a very nifty gift from Paloma.

There’s some of Paloma’s artwork on the wall as well as a cattle skull painted metallic silver, a British Union Jack and a Singaporean flag, a subway poster for The Boomtown Rats, a clock with The Verve’s Richard Ashcroft’s face, and numerous other unusual artifacts.

We have creature comforts.

Ravi is asleep on a large chair, curled into a small ball of black furr and Ju Ju sits on the back of the couch staring out the window behind me.

Pizza and Sam are most certainly curled up with Paloma, sleeping in the next room.

We have a home.

It’s peaceful, it’s comforting, and, to have what we have, it is quite wonderful.

Wendy & Lisa were integral parts of Prince’s band The Revolution and, since the purple one split up that outfit, have made some fine work on their own and as The Girl Brothers. The Closing Of The Year appeared on the soundtrack to the Robin Williams’ flick Toys (which I seem to remember enjoying far more than the average critic).

I simply love the lyric “If I cannot bring you comfort then at least I bring you hope” and, yes, that’s Seal lending his distinctive vocals to the affair.

from If I Should Fall From Grace With God

Gritty and gorgeous – how can anyone not be charmed by Fairytale Of New York?

Band Aid’s charity single from 1984 has been pretty maligned and, granted, it might not be a stellar musical effort, but, if you were a young music fan at the time, it had a certain charm that it likely retains to this day. It featured some of the superstar acts of the early MTV era and it was one of the first musical events I had lived through.

And, if you were a kid at the time, it very well was one of the first times you realized that as big as the world might be, it was one world. And, maybe it made you stop and think that there are a lot of people in the world who might not have the simplest things which we take for granted, not just at Christmas, but each and every day.

At least it did for me.

The Waitresses only released one full-length album and an EP of their quirky, New Wave rock. But, despite their scant output, the group notched two, enduring classics – the sassy I Know What Boys Like and their modern holiday classic Christmas Wrapping.

I’m sure that I first heard the song on 97X during Christmas ’83 as I was discovering modern rock and it was immediately memorable.

Years later, I’d much better relate to the story within the song, and, somehow, despite how many times I’ve heard it, the ending is still a surprise that makes me smile.

*reimagined last week from the posts of Christmases past

This entry was posted on Saturday, December 18th, 2010 at 9:47 am and is filed under Band Aid, Christmas, gratitude, Kirsty MacColl, televised events, The Pogues, The Waitresses, Wendy And Lisa. You can follow any responses to this entry through the RSS 2.0 feed. You can leave a response, or trackback from your own site.

One Response to Yes, Mr. Capra, You Are Correct*