Santa Was A Bit Of A Bastard, Wasn’t He? 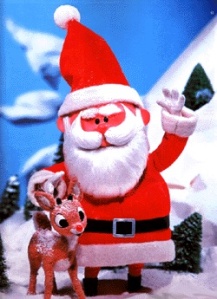 Tonight being, as I write this, November 30th.

It doesn’t seem quite right to be watching it before we’ve even reached December, but I have it on nonetheless.

As a child in the ’70s, it seemed as though there was some animated Christmas special on more nights than not during the weeks leading up to that day.

Those specials were the most certain sign that Christmas was close and Rudolph’s saga – narrated in a tour de force performance by Burl Ives – was one of the linchpins of the holiday line-up.

Watching Rudolph The Red-Nosed Reindeer probably thirty-five years after my first viewing of it, Santa’s behavior is a bit distracting to me.

Not ten minutes into the show and Santa is threatening Donner that Rudolph’s future on the sleigh team could be jeopardized because of his peculiar proboscis.

(and, if reindeer could fly, would such animals in the wild dream of being captive and groomed to chauffeur around a fat man?)

It’s the way that Santa makes the threat that is especially disconcerting. It’s offhand and casual. It’s delivered in the manner of someone who is accustomed to making and making good on threats.

Not that Donner offered much support as he quickly heeded the advice of the fat man.

And, seriously, Donner condemned the fruit of his reindeer loins to childhood ridicule the moment he named the tyke Rudolph.

It is pretty hilarious, though, to hear Donner bellow, “No! This is man’s work!” when, stricken with guilt, he heads out to search for runaway Rudolph and the missus wants to join him.

But the show is a classic and the stop-motion animation fascinates me as much as it ever did, so…

But, it is December now, so what the hell. Here are four random Christmas songs…

from Christmas Eve And Other Stories

This entry was posted on Wednesday, December 1st, 2010 at 7:00 pm and is filed under Christmas, Everything But The Girl, Kate Bush, pointless rambling, random musings, Rudolph The Red-Nosed Reindeer (television), Shane MacGowan, television, Trans-Siberian Orchestra. You can follow any responses to this entry through the RSS 2.0 feed. You can leave a response, or trackback from your own site.

4 Responses to Santa Was A Bit Of A Bastard, Wasn’t He?