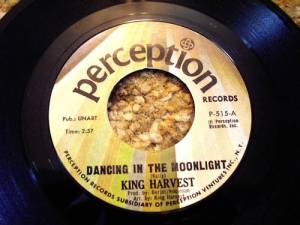 Unlike a lot of music bloggers whom I read, I have no fond memories of going to buy 45s with money earned mowing the lawn.

Many of these bloggers are capable of recounting with remarkable precision the details and circumstances of the first single they ever bought.

I can tell you that the first album I purchased (on cassette) was Christopher Cross’ debut.

And my first live show was seeing a band on a tour that would be infamously remembered and still discussed almost three decades later.

Sure, like most kids, I mowed acres of lawn, but I never bought more than a handful of 45s.

For one thing, I eased into a relationship with music, taking a good eighteen months or so from the point where I was turning on the radio to the point where music was beginning to consume the bulk of my budget.

Also, I had a tape recorder and would rudimentarily tape the songs I wanted from the radio onto crude mix tapes.

The sound quality was charmingly primitive but – as I was taking my time committing to the relationship – it didn’t matter. When I finally went all in, it was with full-length albums on cassette.

So, I mostly missed the experience of the 45.

However, just because I didn’t buy 45s doesn’t mean that I didn’t have any of my own. As a young kid, my mom would purchase a single for me now and again when a certain song would catch my fancy.

I sifted through the contents of my head and – more or less – retrieved the first singles that I ever owned. Though a couple were on radio in late 1972, all of them were on the charts during the first half of 1973…

from Have A Nice Decade: The ’70s Pop Culture Box

It was sometime in autumn of 1972 when I started hearing Dancing In The Moonlight on the radio. The song still changes the atomosphere for me to a crisp October day as it might have been when I was four and would heard the song on the car radio.

I’m not exactly sure what it was about the song. It is ridiculously catchy and it made me suspicious that I was missing some happening communal event that occurred well after my bedtime. I pictured Max and the Wild Things from Where The Wild Things Are having their rumpus under the full moon as the song would play.

And it’s still groovy beyond belief. Is it possible to not be put in a better headspace listening to this song?

In fact, I nominate Dancing In The Moonlight as our global anthem.

from It Never Rains In Southern California

I doubt that I really considered the dire straits in which the protagonist of It Never Rains In Southern California found himself at the time. Again, I was four years old.

I did like sunshine, though and – as it was the dead of a Midwestern winter – the idea of a place where it was always sunny and warm sounded positively magical.

I seem to recall that Rocky Mountain High also served as a title for one of John Denver’s television specials at the time. I also seem to recall negotiating a cease-bedtime treaty to watch.

There he was – granny glasses, floppy hat – traipsing around in the mountains communing with nature, animals, granola-munching girls in bell-bottomed jeans with long, straight hair…

I was impressed with his style.

I was also impressed with the style of one Bad, Bad Leroy Brown, especially after seeing the cartoon that accompanied the song on Sonny & Cher.

So, two of the first, male role models I had – aside from my father and grandfather – would have been John Denver and a cartoon version of Bad, Bad Leroy Brown.

(and things didn’t end well for either of them)

Jim Croce is another artist that I keep intending to explore further than the dozen or so songs I know. Even if I don’t get around to doing so, both he and Bad, Bad Leroy Brown will forever occupy a special place in my heart.

This entry was posted on Tuesday, August 24th, 2010 at 6:47 pm and is filed under '70s, Albert Hammond, childhood, Jim Croce, John Denver, King Harvest, one-hit wonder, random musings. You can follow any responses to this entry through the RSS 2.0 feed. You can leave a response, or trackback from your own site.

One Response to Four Singles