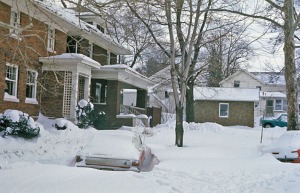 Wikipedia is one site that, if I’m not careful, can suck me in for lengthy periods.

Sure, you have to scrutinize the information, but it’s a good place to start or if you merely want a quick answer.

That’s where things go awry for me.

The other night, I had a question about the movie Hoosiers and, somehow – and I couldn’t quite recreate the steps – I ended up twenty minutes later at the site’s entry for “Great Blizzard Of 1978.”

I remember that storm and, with daily high temperatures that have climbed into the 90s after weeks in the high 80s, the thought of it is refreshing.

That blizzard hit the Ohio Valley and the Great Lakes during the last week of January, 1978.

Chicago got sixty inches of snow.

Lansing, Michigan – where Magic Johnson would have been in the middle of his freshman season at Michigan State – got nearly twenty.

Indianapolis had sixteen inches and Cincinnati almost doubled that amount.

We were situated between the latter two cities and I seem to recall we got about eighteen or so inches of snow over those three days. Temperatures on Wednesday, January 25th had climbed into the low 40s – comfortable for that time of year.

In the early hours before I woke for school the next morning, the snow began to fall. I awoke to half a foot of snow blanketing the ground with schools already being announced as closed.

Our school system was not prone to shutting things down for incidental snow of even a few inches and the trigger to do so was usually not pulled quickly.

It continued to snow through the day and, that evening, the local radio station announced that school would also be cancelled the following day. Our town was small and one of our teachers, a good friend of my mom, had broken the news with a phone call an hour or so earlier.

It was one of the greatest moments of my life.

As the next day was Friday, I was smack dab in the middle of an unexpected four-day weekend that had fallen from the heavens. I’m sure I celebrated by staying up late enough to watch Hawaii Five-O and sleeping in the next morning.

The snow began to taper off by the end of that weekend, but, we managed to snag a few more days off the following week. Having already accumulated a few days prior to the blizzard, there was ugly talk that the snow days would have to be made up.

Suddenly, I feared that summer break would be delayed ’til June.

When we returned to school, there was a mammoth pile of snow that had been cleared from the playground. It sat there in a corner like some iceberg that had drifted in from the Arctic, standing as high as the rims of the nearby basketball goal.

Fortunately, we were required to make up no missed days and summer break arrived on time in late May… just as that iceberg finally disappeared.

The radio was on each morning as we ate breakfast that winter, tuned in to our town’s radio station, WRBI, which, at that time, was touted as a rock station, but which, as I recall, was more soft rock.

From the Billboard charts for the week of the blizzard, there are a number of songs I remember hearing as we awaited word if we could go back to bed or had to trudge off to school. Here are four of them…

from The Very Best Of Linda Ronstadt

Linda Ronstadt had a fairly impressive run of hits in the ’70s including the wistful Blue Bayou, but, I hear her name and I think of a classmate. It was about a year or so after the blizzard and Ronstadt had most recently released her Living In The USA album.

Our teacher asked us to name something of interest to twelve-year old boys.

The classmate raised his hand and replied, “Linda Ronstadt.”

In 1978, about the only thing I knew about Paul Simon is that I had seen him as a guest on some television show and I thought that he looked like an older, distant cousin of mine.

I quite liked the smooth Slip Slidin’ Away when it would come on the radio, but it would be several more years before I began to learn of Simon’s place in pop music culture and his classic work with Art Garfunkel.

I didn’t see the movie The Goodbye Girl, though I did recognize Richard Dreyfuss in the television commercials as Roy Neary from Close Encounters Of A Third Kind.

Mostly, I remember seeing Quinn Cummings, a child actress who was my age, on some afternoon talk show – Mike Douglas or Dinah Shore – promoting the movie and being quite smitten.

from The Best Of Kansas

So, I’m ten-years old and I’m groggily sitting at our kitchen table, having been rousted out of a warm bed at six in the morning for school.

There’s news coming from the radio and, then, a song – a pretty, acoustic song with soothing guitars and lovely harmonies – is playing. And they’re singing about everything crumbling to the ground and only earth and sky lasting.

I’m pondering whether it’s possible to – just once – get through a bowl of Cocoa Pebbles before they liquified into a slushy mush and Kansas is playing the soundtrack.

This entry was posted on Monday, June 14th, 2010 at 1:31 am and is filed under 1978, childhood, David Gates, Kansas, Linda Ronstadt, snow, soft rock, stormy weather, weather, winter. You can follow any responses to this entry through the RSS 2.0 feed. You can leave a response, or trackback from your own site.

4 Responses to The Blizzard Of ’78