You Can Only Invent Fire Once 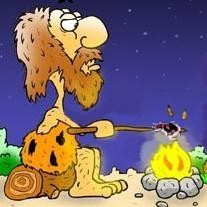 The Lost World: Jurassic Park is on TNT. Though I’ve watched pieces of it when I’ve crossed its path on cable, I don’t think that I’ve watched it from the beginning since I saw it in the theater in May 1997.

It’s better than I remembered.

That initial viewing left me underwhelmed. I was with the daughter of a man who had toured as a member of Elvis’ band.

(that brief liaison was less memorable than the movie)

Four years earlier, I had spoken to a friend who had seen the just-released Jurassic Park the night before.

“You spend half the movie telling yourself that the dinosaurs aren’t real.”

When I saw it that night, there was an audible reaction when the first dinosaur appeared – a hushed, collective “whoa” that sounded like the incoming surf at a beach.

No one had ever seen such realistic pre-historic creatures.

When the dinosaurs first appeared in the sequel, I recall a mixture of applause and cheers, but there was no wow.

We’d already been wowed and moved on.

The human that discovered fire was undoubtedly hailed as a genius, made the rounds on the major talk shows, and got the best tables in restaurants.

And then, the public waited for the next amazing trick. Maybe that turned out to be toast.

Its not difficult to imagine the carping that might have ensued. Critics might have declared that toast was “no fire” and that it was “obvious and rushed” and “a creative dead end for the inventor that warmed us and enriched the clan with his/her/its debut offering.

(I would argue the invention of toasting bread as one of the highlights of our species as who among us doesn’t love a good sandwich and toasted bread, bagel, or croissant makes for a fine foundation)

Here are four songs from acts that went from unknown to everywhere all at once. Though some of them continued to have success, none of them were quite able to recapture the shock and awe (and sales) of their debut albums…

from Beauty And The Beat

The Go-Go’s built the perfect beast with their first hit single and the one-time punk band’s New Wave-tinged pop was both old and new (and complete irresistible). Our Lips Are Sealed brightened the chill of autumn in 1981 and, as I was just discovering an interest in music, The Go-Go’s was one of the first bands that I was there for their breakthrough.

By summer of the next year, The Go-Go’s had notched another mammoth hit, We Got The Beat – which played over the opening credits of the ’80s classic Fast Times At Ridgemont High – and memorably appeared on the cover of Rolling Stone in their underwear (which Jane Wiedlin and I discussed when I had the opportunity to interview her twenty years later).

Sure, the all-female band would release a couple more albums (which had their moments), but, in 1982, The Go-Go’s were an unstoppable juggernaut and as popular as any band on the planet.

from Business As Usual

As The Go-Go’s run was beginning to lose steam toward the end of the summer in 1982, the world was just discovering Australia’s quirky Men At Work. I first heard Who Can It Be Now? when it debuted on American Top 40 as I listened one Saturday morning.

The first time I heard it played on a station was Cincinnati’s Q102 that afternoon.

By the following week, the song was everywhere and so was Men At Work. Business As Usual was selling millions of copies, the videos for Who Can It Be Now? and Down Under were familiar even to those of us without MTV, and everyone fell in love with Australia.

Cargo would be a worthy follow-up album. It might have even been stronger as a whole than the debut, but only the brilliant Overkill was as perfect or as successful as those first hits.

One of my housemates in college was a Dylan junkie. I came home one day and he was all but foaming at the mouth over some female singer – I think he’d seen her on MTV .

I was used to his manic behavior. I had once watched as he almost accidentally impaled himself on a sword in front of a living room full of people during the NBA Finals in ’88.

But he was right on Tracy Chapman. Soon there were droves of people coming into the record store where I worked asking for her debut. Then she played on Saturday Night Live and she went stratospheric.

from Introducing The Hardline According To Terence Trent D’Arby

Christmas ’87 was the first Christmas in retail I ever experienced. And one of the albums we couldn’t keep in stock was Introducing The Hardline According To Terence Trent D’Arby. It was a stunning debut for the soulful singer and the album was strong beyond its four or five hits.

I thought that Terence Trent D’Arby was one incredibly talented guy and an interesting character. I haven’t heard his post-’95 stuff aside from a handful of tracks, but I’ve owned his five major-label releases and dug them all. Even when his music sometimes took questionable tangents, there was always that amazing voice.

This entry was posted on Tuesday, April 27th, 2010 at 5:00 pm and is filed under Men At Work, Terence Trent D'Arby, The Go-Go's, Tracy Chapman. You can follow any responses to this entry through the RSS 2.0 feed. You can leave a response, or trackback from your own site.

5 Responses to You Can Only Invent Fire Once