A Most Wonderful Time Of The Year 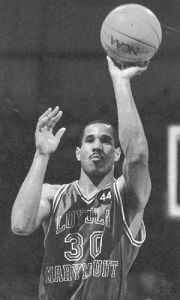 (pre-occupied with hoops – my heart says Butler, my head says Duke has too much size -here’s a post from last March…)

There are no two better days in the sports year – at least here in the States – than the first two days of the NCAA college basketball tournament. There are usually at least a half dozen jaw-dropping moments in the first forty-eight hours.

Most of those moments prove to be quite fleeting and often the key players are soon relegated to fuzzy details – who was that kid that hit that shot when so-and-so upset so-and-so?

As much as the calendar, it is a harbinger of spring.

The tournament has become a bit bittersweet the last several years. It might be a longing for once having the luxury to skip classes and leave the couch only for snacks, glued zombie-eyed to the television for five or six games straight.

It rained a lot during the first two days of the tournament in ’90. It was a cold rain which provided a meteorological argument for not trekking to classes.

I don’t even think I had a shift at the record store.

My school, three years removed from winning the tournament, went out in the first round.

So, I lived vicariously through my brother’s school, Ball State, which was one of that year’s Cinderella teams – a #12 seed which upset two lower-seeded teams and came within minutes of beating a loaded UNLV team for a trip to the Elite Eight.

I remember speaking with my brother on the phone, not long after Ball State had won their first round game in Salt Lake City. It must have been closing in on midnight which meant we’d both been watching hoops for almost twelve hours.

And, of course, the most memorable run of that tournament was Loyola Marymount, the small school from Los Angeles which was a #11 seed. I’d read a lot about the Lions as they were the highest-scoring team in college basketball history. I don’t think that I’d seen them play.

The team had Bo Kimble who was the leading scorer in the country. His teammate, Hank Gathers, had done the same the year before. The two had been childhood friends and teammates in Philly who had headed west for college together.

A week before the tournament, Gathers, who had a heart condition, collapsed and died during a late-season game.

In an event that has no shortage of sentimental pull, Loyola Marymount was the must-see team for most hoops fans that year. They were like watching a pinball machine and the mastermind behind it all was a coach, Paul Westhead, who quoted Shakespeare to his team.

And in each of their games, basketball fans across the nation knew to expect the right-handed Kimble to shoot his first free throw of the game left-handed as a tribute to Gathers.

It came to an end one game short of the Final Four with Loyola Marymount going out against the eventual champions, UNLV.

And probably most of all, the reason that tournament was so memorable for me is that it was my last as a college student. I’d graduate in December.

I still hadn’t left town when the following season’s tournament was played. I likely watched as much or more of it in ’91, but things had changed.

Unlike twelve months earlier, my life was now on the clock.

Here are some songs that I remember from that spring of 1990, when Loyola Marymount made that memorable tournement run…

A good high school friend discovered Depeche Mode in ’83, a couple years before they really broke in the States, and decided to make them his band.

Personally, I found their early stuff to be irritating and didn’t come around ’til Black Celebration.

I thought that Enjoy The Silence was one of their finest.

It was no Under The Milky Way, but the hypnotic Metropolis was a favorite that spring.

from Language Of Life

I hadn’t really heard much of Everything But The Girl until Language Of Life, but the album got considerable play in the record store where I worked. It was most excellent for morning shifts.

from Representing The Mambo

Little Feat is a band I should devote some time to (something I’ve never done). I know some of the band’s more popular songs, but nothing beyond that point.

Representing The Mambo was an album that my roommate brought home from the record store where he worked. The raucous Texas Twister was a big hit with us.

This entry was posted on Monday, April 5th, 2010 at 1:15 am and is filed under 1990, basketball, Bo Kimble, college, Depeche Mode, Everything But The Girl, Little Feat, Loyola Marymount, NCAA basketball tournament, televised events, The Church. You can follow any responses to this entry through the RSS 2.0 feed. You can leave a response, or trackback from your own site.