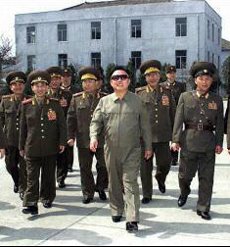 So, Kim Jong Il is engaging in shenanigans again. I can’t help but think that it’s a damned shame that there’s the whole threat of an isolated, paranoid, totalitarian regime possessing nuclear toys overshadowing the amazing comedic potential of the little fellow.

The crazy hair, the diminutive stature, the dubious stylistic decisions – Dear Leader is a craze waiting to happen. With the proper marketing campaign, there wouldn’t be a car in this country without a facsimile of him hanging from the rear view mirror or a puppy without a Kim Jong Il chew toy.

Unfortunately, there is that whole nuclear weapon thing.

Kim actually is not so dissimilar from an icon in the American sports world – Al Davis.

Davis, of course, is the owner of the Oakland Raiders, once one of the premier franchises in the National Football League; now, the organization is an isolated, paranoid, totalitarian regime.

Like Kim, Al has crazy hair, though he opts for an oily, slicked-back coif as opposed to Kim’s towering wall of hair.

Sartorially speaking, Al has his infamous white jumpsuit and granny glasses on a chain. Kim, too, also favors jumpsuits, albeit of a more drab variety, and shades.

Both are also obsessed with the vertical game – in Kim’s case, its intercontinental rocketry; for Al, its rocket-armed quarterbacks and track-star wideouts.

Al even once had a quarterback nicknamed The Mad Bomber.

(I must consult with my intelligence expert – don’t laugh, I have one – and I hope to find that Kim has a rocket expert nicknamed Darryl Lamonica)

Now, as both North Korea and the Oakland Raiders are failed, rogue states, isn’t it possible that the solution to the angst caused by both men is connected to the uncanny similarities between this dynamic, diminutive duo?

Before he became a video game inventor, John Madden proved adroit at working with Al, managing to coach the Raiders to a Super Bowl win. Madden is now retired.

Bring him into the mix, have him broker some kind of treaty between the two figureheads. Maybe it’s as simple as having Kim own the Raiders and Al lead North Korea.

Both would still receive the attention they so desperately crave.

Al’s good at rattling the cages of the powers that be and thumbing his nose at popular opinion. Kim has managed to drive an entire country into despair and destitution.

(ask any of the demented, psych hospital escapees that make up Raider Nation if that doesn’t sound familiar)

Maybe the two are too alike. Maybe the result of a swap would be status quo.

But consider the hilarity as draft expert Mel Kiper, Jr. bursts a blood vessel in his eye as he goes all apoplectic if Kim uses the sixth pick in next year’s talent hunt to select some unknown receiver from Southern Idaho State named Ray Ray Gorgonzola simply because he ran a 4.22 40 at the Combine

Tell me that wouldn’t be preferable to where things stand now.

Kim and Al might not have the market cornered on inexplicable behavior, but, when it comes to crazy, they certainly have the makings of a good cartel. So, here are a few songs for them…

I posted a track from Dunnery’s solo debut, Fearless, awhile back. This trippy little number comes from his second album and both are worth seeking out – very talented fellow.

Crazy might, indeed, be a pit stop, but it seems like an awful lot of folks treat it as a parking lot.

As a teenager, Heavy Metal was among the favorites for movie rentals with me and my friends. The movie’s soundtrack was far more diverse than its title implied, ranging from Devo and Stevie Nicks to Donald Fagen and Blue Oyster Cult.

As for Nazareth, my best friend in our neighborhood as a kid had an older brother who we all held in awe. He had sideburns, sunglasses and a Camaro. And usually blaring from that Camaro was Nazareth’s Hair Of The Dog (on eight track, no less).

Paul Davis – I Go Crazy
from Singer of Songs: Teller of Tales

If Gordon Lightfoot’s The Wreck Of The Edmund Fitzgerald is the light rock Stairway To Heaven of the ’70s, then I Go Crazy is…what? I do remember when this was a hit in ’77 and it was inescapable. It seemed to always be playing over the loudspeakers at our town’s public pool that summer (and on the radio of our bus returning from swim meets).

To Rastifarians, a baldhead is someone without dreadlocks, a non-believer. I have no idea what Kim Jong Il or Al Davis believe and, whatever it is, it’s likely mentally inscrutable to the sane.

However, I have no doubt that the two could benefit from throwing on some Bob Marley albums and blazing away. As hilarious as Harold And& Kumar Go To White Castle was, someone needs to draft Kim & Al Make A Taco Bell Run. It simply must be done.

This entry was posted on Wednesday, May 27th, 2009 at 11:52 pm and is filed under Al Davis, Bob Marley, current events, doppelganger, Francis Dunnery, Kim Jong Il, Nazareth, Oakland Raiders, Paul Davis. You can follow any responses to this entry through the RSS 2.0 feed. You can leave a response, or trackback from your own site.